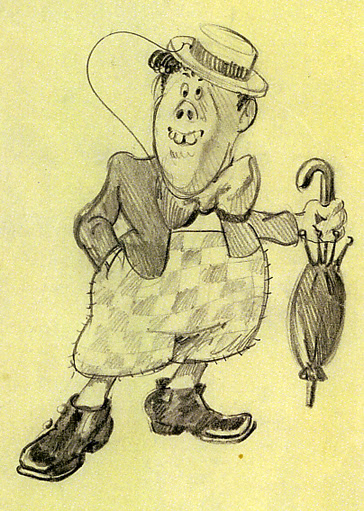 
I'm really suffering here this afternoon, babysitting my former self, as it were: I'm importing into my imac an old cassette tape interview with Ken O'Brien conducted at his office at WED Imagineering. It's been almost 20 years since I've replayed the entire thing...right now Ken's describing his hiring at Disney's(at twelve dollars a week)and early career trajectory. He's charming, but being forced to listen to my teenaged self, asking questions and chiming in...well, it's torture, let me tell you. Didier, this is partially your fault! Just kidding.

I went to see Ken to ask him to share his memories of Fred Moore, at the suggestion of Ward Kimball. Still waiting to do the same transfer thing with my Babbitt interview. That one I can almost remember by heart...there's some great stuff there.
Ah...now I'm asking if Fred was ever "frustrated or unhappy with working at Lantz(after his firing at Disney)?"--as I assumed he must have been.
Ken's emphatically telling me "No! It was always laughs, fun times...no complaints". Honestly, the more material I find the more I'm inclined to believe it. I've also found out something really fascinating about Fred's early life, and his family: they were members of a socialist commune. So much for Babbitt's belief that Fred had no political thoughts--maybe he didn't, but it makes it all the more fascinating to hear, as Babbitt told me and also Michael Barrier in another interview, that Fred and Ward stayed out on the first morning of the Disney Strike for two hours before finally crossing the pickets. Interesting.

Ah! Now O'Brien's telling me about going to Sutherland Studios("on Rampart, Third Street, somewhere like that") with Tom Oreb and Vic Haboush. Names that meant almost nothing to me then, but now, thanks to Amid Amidi's posts on Cartoon Modern, my ears perk up...well, once it's all imported I'll properly transcribe it. I did it once by hand but those laborious notes were lost years ago.

Ken's got such a rich voice...what a great guy he was. I spent the morning with him and then sat down to lunch with he and "Herbie" Ryman in the commissary. Halcyon days--the very last days of the old guard working in the industry.
Next week: a whole slew of Fred Moore material.

Thank you Jenny! I can't tell you how much I appreciate you doing this and how this made my day.

We are all a bit nuts aren't we, to spend our nights and sunny days working on transcriptions and editing books about animation that will interest only some happy few? But then we know that those artists we love would remain nameless and voiceless for the generations to come - who will also adore their work - if we do not do this. Thanks for thinking it is worth it.

Oh boy, Jenny. That would be so great to HEAR as well as read. Even if the tape quality is not great. Can you post its as audio? That would be so cool. Especially as you describe the richness of Ken O'Brien's voice.