About Fred Moore-a flashback, and forward.

Reposting this entry from 2005. More Moore is coming! 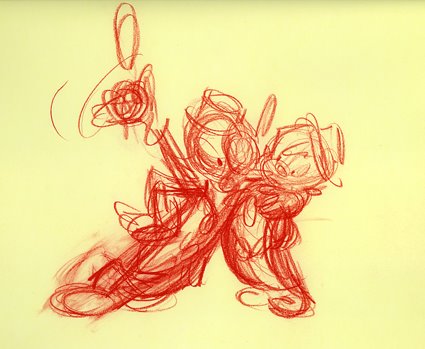 I've got this thing for Fred Moore.
Yes, me and about 5,000 other animation geeks, professional and otherwise.
Fred:  by all accounts a likeable, ordinary guy with a natural drawing ability and a predilection for cartooning women in a style all his own-immmediately recognizable.  His achievments include redesigning Mickey Mouse into the appealingly boyish character he became, and likewise refined and animated much of the dwarfs in "Snow White".
Like most artists what he drew somehow seemed to physically resemble him and took on his brash, pixilated personality.  When I became aware of him there was nothing at all about him in print, save one or two lines and drawings in the Finch book,  "The Art Of Walt Disney", but the appeal of those was enough to make me determine to find out more about him.  A brief conversation with Ward Kimball started me on the best treasure hunt of my life: Ward suggested I call Ken O'Brien at WED("He was a big fan of Fred's", Ward drawled with more than a hint of amusement).  I did, and interviewed Ken, as well as Art Babbitt, Ollie Johnston, Larry Clemmons, Carl Urbano(who'd gone to high school with Fred and his brother), and of course, Ward himself.
These were priceless experiences, a kind of time travel.  My motivating question, "what happened to Fred Moore?" was answered very quickly.  I knew beforehand that he'd died very young in a car accident, but the greater mystery for me--as it's been to many other animation lovers--was why someone with such sterling provenance and amazing talent had faded so fast fom the pinnacle he reached at Disney's in 1933-39.  The brief answer, well known today, is that his talent and his health were ruined by alcoholism, but that's a bald-fact answer to a complicated set of circumstances.  What I really learned from Fred's former colleagues was quite a lot about the optimism, opportunities, genius and frustrations of more or less inventing your own job description--as Fred did.  He seemed to be as intuitive an artist as it was possible to be: self-taught, self-improving, an innate sense of the ever-elusive "appeal" so desirable in all things drawn and gestured, a natural grace.
When sitting across from these titans of animation, asking about Fred and Disney's, I was very young, a teenager, and I couldn't grasp all of the adult nuances of the business of animation then as I could now.  I do remember coming away from hours spent with Ward and Art feeling as though I were in a trance.  Clearly, to have one's heart's desire and animate at the best studio in the world during the "golden age" wasn't all a bed of roses.  This seems absurdly obvious now, but even though I had a pretty good idea of history, I just didn't have the life experience to interpret it at 18.  Many times I've wished I could go back and do it all over again, but sadly all but one of my generous interviewees are dead.
Ward, Art and Ken O'Brien (Fred's assistant in the early 40s at Disney; he was loyal to Fred to the extent that when Moore was fired in 1946, O'Brien quit too, and accompanied Fred to Lantz' studio for two years) all lent me materials to copy; Ward showed me some of his incredible collection of hilarious drawings, collected in voluminous scrapbooks.  Several books--fat as phone directories--contained nothing but daily (often hourly) gag drawings of Fred, Ward and Walt Kelly by Kelly himself (curiously not nearly as many that Kimball saved were by Kimball--or perhaps those were in other books. Very likely.).

Looking at us looking at them: Walt Kelly, Ward Kimball, and Fred Moore, drawn by Kelly and saved for posterity by Kimball.

As the years roll along and not just Fred but his peers and world disappear, his influence has actually continued to grow among artists. Why his talents mattered in a unique place and time are subjects worth discussing, as is the best animation he helped to realize. Look for more to come-and feel free to weigh in on him yourself!


It's been a long time between updates, but that means there's plenty to write about in the world of animation art and history-in particular this wonderful new book by Mindy Johnson: Ink and Paint, The Women of Walt Disney's Animation.

If anyone knows more than Ms. Johnson about the women who worked at the Disney studio from it's inception to the present day, I'd be stunned. Last year I was able to see her present a preview of her book, the scope of which amazed me-it's not only about the roles of women at the studio in the ink and paint department and elsewhere, but presents everything in context of the times, of Hollywood, of the United States and women in the arts here and abroad. It's a wow. The physical volume itself delivers visually as well as intellectually-the rare photographs and illustrations are endless.

Are you interested in what daily life was like at Disney's in its Golden Age? Here you go: 348 pages of how the Disney studio operated, was organized, how the staff-all of them-worked and played and lived. You'll want this book.

I've more to say, but in the very near term if you're in Los Angeles this week you have an opportunity to see Mindy give one of the most fascinating and pleasureable talks a Disney afficionado could ask for. At the De Mille "barn" in Hollywood this Wednesday evening Mindy will be giving her presentation of the stories in Ink & Paint. It's $15, and well worth it. Details below.

In honor of National Women's Month, The Hollywood Heritage Museum and The Hollywood Foreign Press Association present author MindyJohnson with her recent, acclaimed work on the women artists in theWalt Disney Ink and Paint department. Miss Johnson will be signing and selling her book at the event.

The Hollywood Heritage Museum is located in the Lasky-DeMille "barn" across Highland from the Hollywood Bowl; there is plenty of free parking in the lot surrounding the barn.