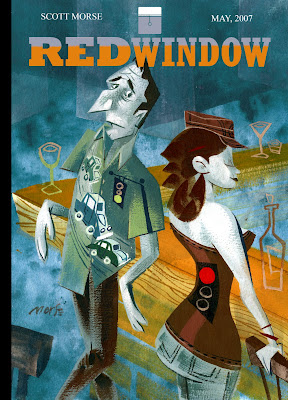 From the blog of Mr. Morse. I post this so anyone stumbling across the Blackwing Diaries this morning will click right now and have a look at what this prolific artist is up to lately(even busier than usual getting ready for San Diego next month-but a few weeks off now). How he finds the time for all this personal work while juggling the gallery shows, his own publishing imprint, his day job and his young family I don't know, but it's inspiring--if exhausting--to think about.
I used this painting because I just really love it--especially how he's handled the girl. Great stuff. Dare I say he works the paint bottles(and I assume they're still squeeze bottles)like a chef?
So saunter on over and see his ukeleles.

Pop Quiz on a subject of some obscurity: Mickey Mouse--in Vietnam?

UPDATE 7/2: Didier Ghez, on his Disney History blog has come through yet again with actual images from this rare short, scanned from the book "Bon Anniversaire, Mickey!" by Thierry Steff. Many thanks , Didier.
By the way, if you haven't lately--please do pay a visit to ogle the rarities and terrific links always available on Didier's blog. Its an essential resource.


My friend Ennio here at work is looking for some inforrmation on this short film--one I'd never heard of and had no idea existed-"Mickey Mouse In Vietnam".
Below is pretty much all I was able to find, from Wikipedia:

"Mickey Mouse in Vietnam" is a 16mm underground short movie. The director was Lee Savage. It features the Disney character Mickey Mouse being shipped to Vietnam during the war. Moments after arriving, he is shot dead. It was produced independently in 1968 or 1970.

Sounds a little like "Bambi meets Godzilla" in terms of pacing. The name Lee Savage is barely familiar to me. I have several books about independent animation that date from the late 1960s-early 70s so perhaps I've read about him there.
But this short: has anyone ever seen it? Was it inked and painted, or done in any style attempting to be true to a classic Disney look? Is it available to see, either commercially or elsewhere?

Today it's more the norm to look at this kind of shock value approach and see it as obvious and heavy handed--and maybe it was, even then. But Mickey Mouse and friends were still sacred icons that represented a kind of wholesome, intact, optimistic America that was taking an awful beating in those years, so he of all characters must have seemed the ultimate target for political/sociological statements of one kind or another. I think much of that stuff was wildly overdone, but it was new once. At any rate I've no idea how well done--or not--this film was. I'd be very curious to see for myself--and Ennio wants to track it down for a friend who's writing about wartime cartoons.
Can anybody offer some input? All much appreciated!

An Animation Auction for a Good Cause 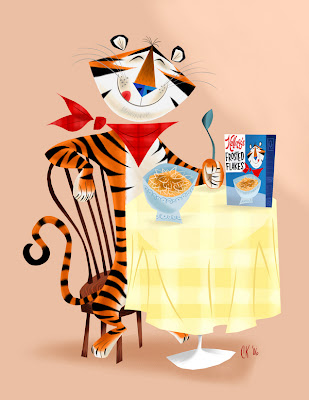 Craig Kellman does his take on Tony the Tiger-yours for a winning bid.

Here at work we've had ongoing art shows in a newly dedicated gallery space; the first show was an assortment from the visdev department. I loved what I saw and bought a swell painting from designer Andy Bialk. I'd have liked to add even more to my collection, but Andy's was the only piece offered for sale. 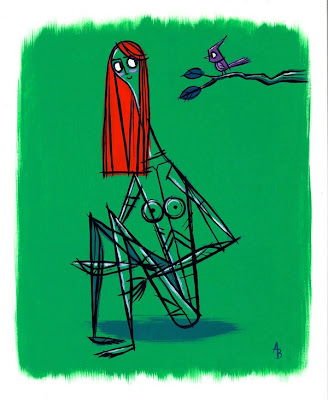 Now Andy's just emailed me about an upcoming public auction with many many works from great animation artists hosted by Cartoon Network. It benefits the Family Service Agency of Burbank, and that certainly seems a worthy cause. If you're local(bids have to be made in person), or can contact a local to bid for you, it's this Saturday, June 30th, at the Cartoon Network Studios. Here's the link: 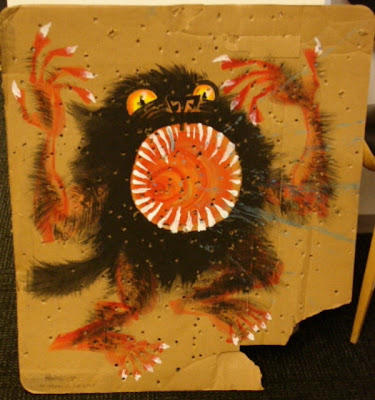 There's loads more talent on the auction page--Chris Reccardi, Seonna Hong, Megan Brain, some guy named Kent who did a terrifc abstract, Pete Oswald, a really cool piece by Ellen Williams-gan abstract, mixed media/glass on watercolor!--and many others. Check them out.

A Los Angeles Time Machine of a Blog

The proposed entrance of the Los Angeles Zoo circa 1957. Courtesy of The Daily Mirror blog

For all the beatings blogging has taken in the MSM lately, I find much more treasure than trash in my browsing-often in the least likely places.
Saturday night, while looking for information on a long-closed L.A. restaurant that my parents took us to as kids("Poor Richard's"-a sort of Pleasure Island/Farrell's/miniature Grizzly Flats-styled eatery in my memory) I came across a terrific blog I'd no idea existed:
The Daily Mirror.

Larry Harnisch scours the local paper of 50 years ago, re-reporting mostly crimes--lurid, unsolved or simply odd--that were on the front pages of the day.
Much of it makes for disturbing but fascinating reading. One or two entries are unbearably poignant. Some I find myself skipping over because they're just too disturbing for me--although they were published in what was supposedly a quieter, gentler time. Don't believe it.

In his posts Harnisch frequently goes to the scene of an event as it is today, taking a photograph and ruminating on how things used to be in 1957.
He also features some of the ads and ad art from the paper, along with articles in no way connected with crimes that are simply neat. Here's one about a proposed version of our L.A. Zoo:
A Googie Zoo for L.A.

So if you're at all interested in local history or feel like stepping back into the real-life world that inspired "L.A. Confidential", this is a must.

How's this for an anemic post?
The above is a detail from the bottom edge of a piece of Disney feature animation paper from the summer of 1989. An intrepid friend was generous with some unused supplies(we were still at Calarts at the time) and I was the happy recipient of some drawing materials.
This is hardcore trivia, but apparently it was only for a very short span of time that this boilerplate warning appeared on every sheet of paper used by every animator, assistant and cleanup artist--printed not once but twice on each side of the center peg hole. Interesting. Well, sort of. The thing is, this proviso is really unnecessary--it's a legal fact that at every studio, every production drawing is always the property of the company, etc. etc. As it was this notice was soon dispensed with and the paper went back to its original blankness.

Incidentally the texture of this paper is quite different than the later super-luxe, slightly off-white bond we all lusted after at school and later at other studios. This one is a thinner, slightly rougher product.

I'd love to do a post sometime of the various papers and pencils--and pens--that came into and out of vogue at varying times at Disney's. We all know of the Blackwing and the Blaisdell Layout--and the ubiquitous Prismacolors--but what others made their marks in the hands of animators and story guys?

The image and idea for this post are freshly swiped from Cartoon Brew, but you can't over-promote something like this: Lou Romano has done a New Yorker cover.

A New Yorker cover. The great one. The pinnacle of illustration platforms. The one magazine that strictly provides a forum for illustrative art on its cover almost 100 years after its inception.
Coincidentally(and it really is), he has a starring role on a film he worked on in visual development coming out soon, too. This isn't suprising as Lou was likely acting before he was drawing--or most likely it was simultaneous.

And I can think of at least one man who wouldn't be in any way, shape or form the teensiest bit suprised at this cover, and in fact was certain sure of it a long time ago. I can almost hear him predicting it. He probably did.
Congratulations, Lou.

Michael Barrier has written a typically thoughtful review of "Ratatouille". Apparently it had a sneak preview last night. If I tell you I had no idea there were any sneaks in the offing, that might offer some insight into why I haven't been updating much. Too busy!

As for Rat'--I've been very curious about this film(yes, I and every other person I know in the business) since word worked its way downstate that Bird had taken it on. Barrier, a writer I very much respect(he may be one of about two or three in the mainstream media who really, truly know how animation is made--animation of the present as well as the past), previously expressed skepticism that a film with rats as its main characters is setting itself up with a possibly insurmountable wall of aversion from the audience, but he's been happy to have his mind changed on that score.