Traditional character/hand-drawn animator (and current Disney visdev artist) Minkyu Lee has been working on a personal film over the past two years, a short that from the looks of the footage I've seen proves it's possible for beautiful and polished work to be achieved by a very small number of individuals, if the people involved--and especially the person in charge--has the chops to pull it off.

Obviously Minkyu Lee does. This has the look of what we tend to call "classical animation". By the way, Minkyu painted all the backgrounds himself. There are only 6 key animators listed in his credits, all are friends and fellow CalArts grads with the notable exception of James Baxter(I think his work is immediately apparent in the short trailer). In additon, a dozen more artists not listed below, all of an obviously high caliber, helped finish it on their own time and in addition to their day jobs.

This is really something else.

Adam and dog Trailer from Minkyu on Vimeo.

Here are the credits as listed on the trailer's page:

Written and directed by Minkyu Lee 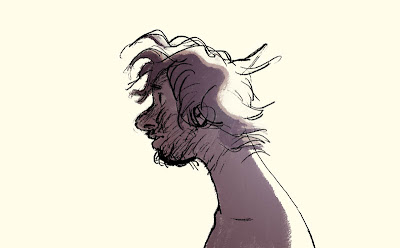 A complete list of everyone who contributed is on the film's Tumblr page, which is also where I got the accompanying artwork I've posted.