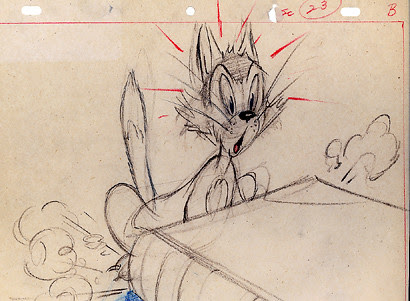 I found this at Howard Lowery's old brick and mortar store in Burbank(miss that place--I'd see almost as many animators there as at the also-defunct Dave's Laser). It was one of those less-pricey items he'd keep out in a bin to flip through. Since I never saw old story sketches for sale, I bought it. It's only described as a "1940s Columbia" short...not being at all familiar with those cartoons, this is mysterious to me.

Anyone have an idea where its from? I'm wondering who slammed the poor cat's paws in the book--or the book in its face, or whatever's happening here.

Instant flashback time - I used to spend all my free time at Howard's and Dave's Laser back when I was young, single and had too much time and money. I myself have a bunch of "finds" from Howard's great bins. I still kick myself for not grabbing a great drawing of Johhny Appleseed's guardian angel I saw in there right before the store closed.

I think that might be from "Cholly Polly". I think I have it on DVD. I'll see if I can find it to check.

God, Steve Worth! I should have known you would know! I wouldn't even know where to think of looking for it(shame on me)...if there's any studio I draw a blank on it's Columbia. Not a boast! ; )

Mark, gosh, weren't those the days? It seems like about 30 years ago! Or should I say 300? Anyway--a long, long time ago. It was so fun to go and see what the new releases were at Dave's...man, the money I spent on that first deluxe Pioneer laser player. Shudder...sigh. It's in the basement now. I still have a bunch of lasers that have never been released on DVD(yet). You too?

As for Howard--! The only way I didn't go completely broke was to not go in there. Every time I did, I'd buy something....what a collection of stuff! Isn't it torturous, the ones that got away?
(Did you manage to get anything from the Grim Natwick sale at Howard's, btw? --That you can answer when next we talk!)

It could be Cholly Polly. There's a scene in that one where a book flops down next to a cat (but there is also a dog in that same shot, so I'm uncertain).

I actually thought of Tom Thumb's Brother at first but that cat looks a LOT more cartoony than the one in the actual cartoon.

Jenny-
I have a closet full of Laserdiscs, some of them never opened. I still have my old Pioneer Laser player that stopped working long ago. The Laserdiscs are pretty much useless to me but I don't know what to do with them!

You can always sell laser discs at Amoeba Music in Hollywood. I'll be glad to go there and buy them. Jenny, are you sure that animation drawing was done on the West coast? Those look like Oxberry peg holes, which would point to New York.