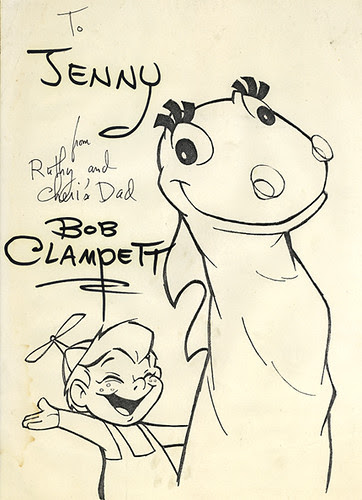 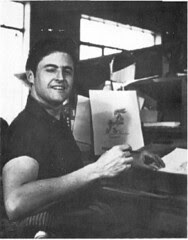 What?? Noone posted a comment on your blog on Bob Clampett's birthday??? That's a sin. Oh well. A little late, but here I am. Actually, I posted a B-day pic to Bob on my blog as well. Check it out here.

It's cool how you went to school with Ruth and Cherie. Were they good kids?

Yeah, I was surprised too, no comments--on Clampett?! ! Oh, well--as long as someone reads it, I'm happy.
They were very good girls! Well, Ruth was in my brother's class(3 years ahead of me--and in grade school, that might as well be 300, at that age), Cherie was younger, just; but both are super recognizable--at 100 yards--really red hair, and v. cute. I believe Ruth was a serious and excellent student.
I discovered just WHICH Clampett their dad was one day waiting to use the pay phone at school; Cherie was on it and calling her dad at work or whatever. I heard her ask for "Bob Clampett, please" and when she'd hung up I asked her(all excited)--is your dad THE "Bob Clampett??"; she said yes, and even though she was--what?--8 or so, she was obviously so proud of him. I knew him only because of the "Beany & Cecil" credits at the time.

Hey, thanks for posting this! I had the luck of running into Mr. Clampett at the San Diego Comic Convention in (I think) 1974. There was little interest in animation at the Con in those days, so he was happy to sit with me for hours, telling me wonderful stories about the Warner Brothers studios.

What a powerful, imaginative talent he was.