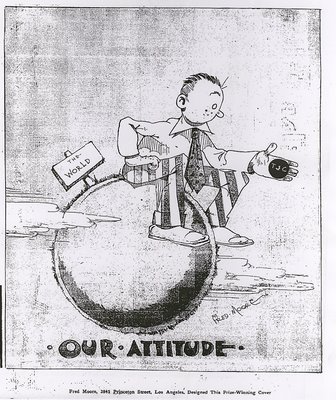 This L.A. Times illustration was forwarded to me by an intrepid visitor to this blog some months ago; I've misplaced the original email, and can't remember the name-if you're out there, please email me so I can give you the credit for digging this up.

In talking to James Walker and interviewing him about the stories he's collected, usually from coworkers who began working alongside Fred Moore in the 1930s and 40s, I learned some really eyebrow-raising bits of biographical data. Not least of these was that Fred had spent his early childhood living in a socialist utopian society! That nearly had me toppling out of my chair.

First, I knew that Fred had lived in midtown Los Angeles as a teenager, and had wrongly assumed he'd always lived here; Carl Urbano, an animator who went to high school with Fred, told me the Moores were a borderline if not outright poor family, and perhaps because of that and with proof(via Fred's high school yearbooks)that he had lived in the city by age 14 or so, I'd never thought of his family moving around before he started at Disney's in 1929 shortly before his 18th birthday.

And there's also the supposed lack of any kind of political interest, leaning or savvy, tossed off by more than one person as evidence of Fred's disinterest in anything other than animation, his family and "a good time". Speaking of his seminal subject, the 1941 Disney strike(which he led), Art Babbit told me a fascinating anecdote:

"The first morning of the strike, Fred and Ward Kimball stayed out, did not go in, for about two hours.
Now, Ward had come from a liberal family, the father was very liberal and so forth, and Ward knew what the score was, but Ward was looking out for Ward, as he always has. But Freddy...Freddy I think was torn. Here Disney had given him this great job, great salary, and he felt a gratitude and loyalty to Walt. But it tore him up because these were his friends out there"[Kimball and Moore eventually went into work that first day of the strike, and stayed in].

Babbitt made it plain he felt that any sort of political awareness was just not part of Fred's makeup. I took this point of view for granted as fact...how I would have loved to have sprung the information on Art that Fred was raised as a toddler and was a participant with his family in the famed Llano del Rio socialist colony in Lancaster. The breakup of the Colony in 1917 likely was the cause of Fred's move to Los Angeles.

A photograph of the Llano Colony, circa 1914; Fred Moore would have been 3 at this time and could well be somewhere in this crowd.

Of course, this is all pretty esoteric stuff, but I love history and in particular details about the local life of a century ago in the Los Angeles area. I had no idea that Llano del Rio ever existed, although I must have read about it(and forgotten), as I did read "City Of Quartz" by Mike Davis some years back, which has as its opening a piece about Llano.

And as far as the young Lancaster resident, eventual Disney star Fred Moore is concerned, it's a kick to see he had a personal tie to a fascinating part of California social history apart from animation--and it adds a dimension to his personality that we can only guess at--and most of his coworkers never knew about. Either he really was much more aware of politics than Babbitt thought, or he, like so many 2nd generation hippies, yuppies, conservatives and anarchists, had had plenty of all that by age 7 and wanted to stay apolitical for the rest of his life. I guess at this point we'll never know, but the lesson here is that no one is always what they seem, are they? I'd love to know more about the Moore family and parents.
Where did Fred's first wife and daughters go? Perhaps someday they'll surface.