Well, they aren't officially, really 'maquettes'-but they certainly could pass for them. Here are more from the collection of Dan Goodsell, he of Tick Tock Toys and Mr Toast. By the way, his book, "Krazy Kids Food", published by Taschen, is the biggest hit in my office; no one can resist its charms when they enter; they simply have to pick it up and look in it and ooh and aah at the memories it evokes, or just wonder at the inventiness and sheer fun of kid's packaging design of the 50s and 60s. Highly recommended.

As I noted earlier in the week, Dan contacted me with information he'd acquired through years of swap meet and garage sale buys: there was a series of chalkware "girlie" nudes that look amazingly like the private drawings of Fred Moore at Disney's.
They were apparently originally produced by a company called "Verdan Loylane" of Hollywood, California in 1941. Some of his girls have identifying labels with names and the appellation "Nudist Scamps", and they're all about 5" high. The earlier post featured a particularly Moore-esque redhead that's larger by an inch or so--she's probably made by "Fantasy Fair", yet another Hollywood-based company whose copyrights are '43 and '44, so far as I can make out by internet hunting. Dan notes how rare these are--I posit that although these cheap souvenirs were likely sold to servicemen in good numbers, they probably didn't survive a lot of wives' housecleaning! When the kids or grandkids were around, one can just imagine these tossed in a bureau--or the ashcan. A sad fate for these innocently charming sirens. 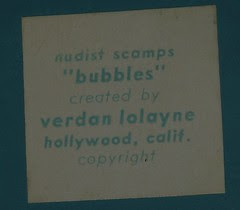 The label from the figure below, "Bubbles: 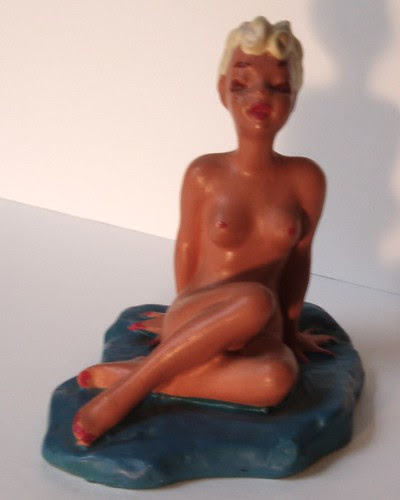 "Babs", another of the "Nudist Scamps"; a cruder paint job on her face, but still evocative of Fred's style: 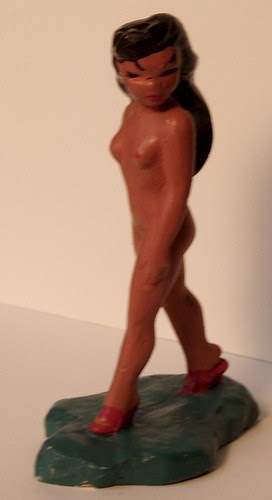 And that's the extent of the Goodsell collection of these beauties, which is pretty amazing.

Of course there are some interesting unanswered questions: was there any connection at all between a Disney animator and these items? Was it simply a coincidence that they looked like this, and came out at the time? Did Fred own any of them, in any case(I'd have to think he sure as shootin' did)? How many more of these in this series were made?
I wish I had more time to scour swap meets and garage sales.
A big thanks to Dan Goodsell for supplying all these photographs

EDITED TO ADD: I've added a photo of a similar "nude girl" chalkware figure to point up just how very Disneyesque the others really are: 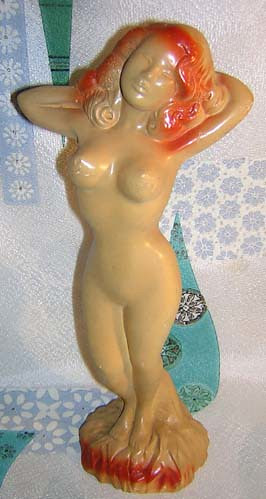 I'd wondered whether my suspicions about the distinctive styling of the "Scamps" might be thought of as reaching by the casual onlooker, but this--the anonymous, generic girl above--is representative of what most souvenir nudes looked like. Seeing how devoid of personality this one is, it really makes the others stand out as exceptional.