Mark Kirkland on the El Capitan stage, in front of one of his photographs of Ollie Johnston. Ollie's holding a portrait of Walt Disney. This is the best I could do from the balcony with an iPhone.

When a man passes from the scene who's been as historically and artistically significant and as personally loved as Ollie Johnston, he deserves a great tribute from the animation community.
That's exactly what the last of the nine old men got last night, in a nesting doll of an evening at the El Capitan in Hollywood. From the stroke of 7 till well after 10 Leonard Maltin(doing a splendid job) introduced and moderated for these colleagues, friends and family:

Leonard noted that in the audience were Kathryn Beaumont, Margaret Kerry, Dick Jones, June Foray and Virginia Davis. The names of those notable animation folk filling the rest of the theater are too numerous to list. The age range of the attendees was probably 5 to 95.

Ollie was discussed by those onstage as "the family man", "the railroader" and "the mentor"-a backdrop of portraits representing Ollie in those guises was projected on the screen. Clips of his animation were shown(including the seldom seen "Reason and Emotion" and a never seen pencil test of a very Fred Moore-like girl removing a brassiere-wow), but it was particularly lovely to see rare glimpses of Ollie's personal work: gesture drawings of his sons, paintings and drawings of his wife, the Johnston family Christmas cards--even early student work from Stanford(these last courtesy of Calarts alumnus and Simpsons director Mark Kirkland, whose presentation of his photographs of Ollie taken in later years was beautiful). I could have looked at the watercolors, pastels and paintings of Marie Johnston for hours...it's stunning to see such different material from an artist whose drawings you think you know well. I wish there was a book that could encompass that art.

All of the speakers were eloquent, funny, emotional and thoughtful by turns. Glen Keane, John Musker, Brad Bird, Ron Clements, Andreas Deja, Andy Gaskill...all of them became the young, neophyte animators of 30 years ago once again when remembering Ollie's work and mentorship. Ollie's sons Rick and Ken, Carolyn Johnston, Frank Thomas' son Ted and his mother Jeanette Thomas remembered their dad and friend as he was in his private life, full of enthusiasm and fun; outtakes from Ted Thomas of Frank and Ollie blowing take after take of discussing "Jungle Book" made obvious how much of a spur each was to the other as pals.

The penultimate speaker was John Lasseter, whose learning from Ollie began before they'd ever met(he spoke of memorizing the particular 16mm prints of the then-difficult to see Disney features in the Calarts library so completely that when he later saw copies without the same splices and pops, he'd be jarred by their absence) and eventually extended beyond animation into the heart of Ollie's great hobby, railroading.
John's story of rescuing and restoring the Marie E.--the little mine train that Ollie had owned and run for years at his property in Julian, California before having to sell it due to advancing age--was achingly bittersweet. Watching via video shot on the day a fragile Ollie, surrounded by family and friends being surprised with the sight of his beloved steam locomotive pulling up to the New Orleans Square depot in Disneyland fully restored...terribly poignant, and unforgettable.

Ollie Johnston lived an exceptionally long life-long enough, sadly, to see his best friend and his wife go before him into that good night--but also long enough that he was able to bask in the warmth and gratitude of his artistic heirs, many of whom became his friends. He saw the influence of his work in the achievements of dozens he personally guided and others who've acknowledged their debt to him and his colleagues. Everyone last night had stories and memories that overflowed with goodwill and thankfulness for the life of this quiet, unassuming and profoundly talented artist. It was a wonderful thing to be able to share in those memories and reflections, put together beautifully as was done last night. To those responsible-most especially the Johnston family-a heartfelt thanks.

Excuse the sorry quality of the photo-it's from an Ebay auction I sadly didn't win. What a great little image by the great Joe Grant.

Many of you already know about this event scheduled for September 6, a benefit auction to help preserve the Sayama forest near Tokyo-a place special to many, not least the filmmaker Hayao Miyazaki. It's the inspiration for many of his films' themes and special sense of mood, especially his endearing "My Neighbor Totoro".

The Totoro Forest Project was begun as a way for some stateside artists to contribute in the best way they could-by creating and donating works of art inspired by the Forest and Miyazaki's totoro(forest spirit) characters. There's also a complimentary blog detailing the various pieces and artists:
Totoro Forest Project Blog

The roster of artists contributing is as impressive as one would imagine given the breadth of both Miyazaki's influence and the center of the event, Pixar. Apparently all the tickets for attending the auction at Pixar are already sold, but online bidding is going to be an option. It's a good cause, and a great chance to buy some amazing art. Here's a couple of examples, courtesy of the blogs linked above:

There's much more to see on the main website. Go have a look. It's a worthy cause in a world of too much development and too few trees and totoros.

No doubt it'll grow and change as new films are released. For now there's a released films timeline(with links to the colorful Archives entries on each title), a comprehensive FAQ for artists and interested parties, and other relevant information --not least a page devoted to this week's SIGGRAPH and Disney's various presentations there. There are many tantalizing projects in the works in the hat building at present, all detailed on the Projects pages. Be sure to check out the "Bolt" visdev that illustrates the "Careers" pages. One such example is above.

I'm looking forward to a solid online place for Disney animation past and especially present to be publicly celebrated.

A neon replica of The original Hyperion studio sign, executed by Kevin Kidney and Jody Daily. The original was adapted for the new animation studio logo. 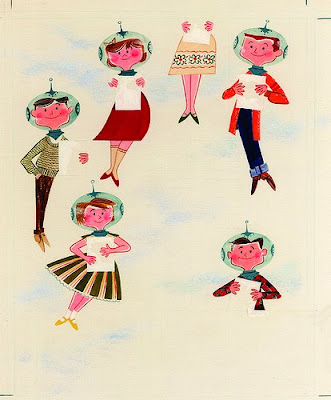 Kevin Kidney has two abiding obsessions: Tiki art and Disney art. If you ever think either of those is overexposed and you've seen it all already--believe me, you haven't until you've been to his blog.
I mean, the man's a serious collector as well as talented veteran designer-his taste is exquisite. Go over to his place and see if you don't agree.

Kevin's got the originals of these magazine illos--the better to appreciate their vibrant color and crisp design--and all doubtless whipped up on tight deadlines as if they were nothing.

Oswald the Lucky Rabbit casual Friday excuse for a post

Because girls read The Blackwing Diaries too, and because they're keen:

From Brazilian designer Melissa. They're a soft plastic that feels like suede, and they smell like candy. Really.

I've recently pointed readers to my friend, fellow story artist and co-author Dave Derrick--but it's not too soon to bring him up again as he's just returned from a safari to Africa.

That continent, its unique look and its life have been a special love of Dave's for years(inspiring his chapter in Scrambled Ink, an original just-so sort of story). It's been the number one place he'd wanted to go and he took along his sketchbook, his clay, and his paints.

He's only begun to post his impressions and artwork, but I feel certain that anyone visiting here should be sure to check in regularly to get a peek at what he's done. His observational skills are something.

Here it is: African Diaries 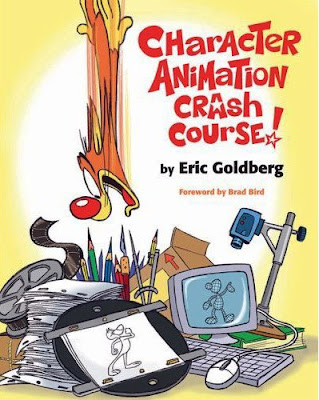 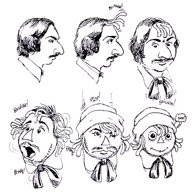 Well, it's happened again: I plan to do a post on a subject and Cartoon Brew scoops me.

But although they get probably 20 times the traffic I do here at Blackwing, when it's Eric Goldberg one is referencing the more the merrier.

Amid designated Eric as the "cuddliest" man in animation. I'd add that he's one of the smartest and funniest--and I don't mean his animation (only) but himself; he's as sharp as a ginsu knife and his wit is matched by his kindness. No hyperbole here, just fact.

So I'm happy to make mention of his appearance at Samuel French in WeHo tomorrow night, August 5th, to sign his new book "Character Animation Crash Course".
The book is a must and if you can, you should certainly stop on in.

The Creative Talent Network and Samuel French Bookshops invites you to join Eric Goldberg at a reception and booksigning in Studio City this Wednesday August 6th to celebrate the publication of Character Animation Crash Course. This event is free of charge and great for students of animation to get an opportunity to meet Eric Goldberg and for pros to re-connect. Food and drink will be served.

Coinciding with the signing, Animation Podcast is up for the month(remember, friends: it's on a regular monthly schedule now-a great boon to those of us who enjoy this worthiest of podcasts)with the tantalizingly titled Part One of an interview with Eric Goldberg, conducted as always by the tireless and dulcet-toned Clay Kaytis.