Hans Perk of A. Film L.A. has been sharing his photographs of the (packed) interior of the Walt Disney Commissary taken in the 40s, and thanks to a link he posted I was able to acquire this swell item.
I'd date it to pre-WWII, just after the Burbank studio opened-1940 perhaps(the only characters shown being the shorts stars, Snow White and Pinocchio).

I love looking at menus from the first half of the 20th century; they're usually wonderfully decorated and the wide array of offerings is so superior to the fare an average "american cuisine" place has today. Of course there aren't too many of these sorts of eateries around at all anymore, not even in a city as large as Los Angeles. The closest thing might be a Hamburger Hamlet or a Jerry's Deli(neither of which live up to their reputations in my opinion). Then again Musso & Frank(mentioned below) would seem to have the same menu now as 60 years ago...I mean really, exactly the same, which is one of the reasons I enjoy going there.

So here, complete with discoloration I didn't fix in Photoshop is the interior of the menu. It's large, printed on a medium-weight card stock, nothing flimsy. Lots of fun menu selections and appealing artwork. There's beer, too. And a prime rib sandwich for all of 35 cents. See-it really was possible to live on fifty dollars a week. Or in the case of the top animators, several hundreds a week. Every few dollars made a difference. There's a reason for nostalgia!
Click the images to open them in a much larger size. 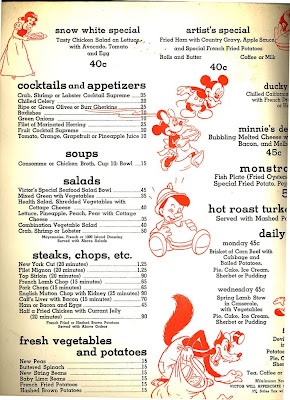 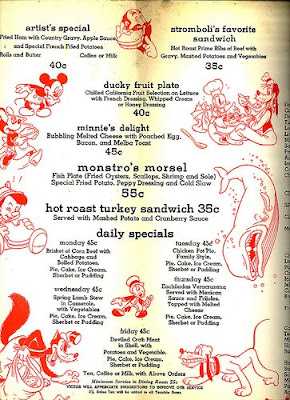 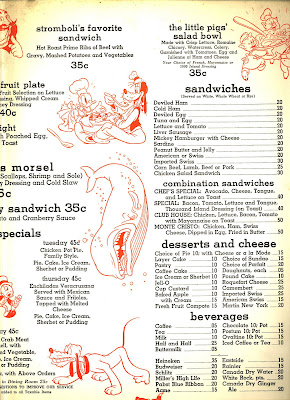 What a great item! Thanks for sharing this with us. It is amazing to see the care and artistry that went into a simple item like a menu.

We did eat a lunch that large on occasion -- and yes, we did sleep under our desk the rest of the afternoon.

That cover was great! Is that yellow aging around the edges? If so, it didn't hurt the look of the menu a bit!

Acme beer? Love to try that out!

Nice- menu- that reminds me we need to do lunch! And when are you going to promote Scram INK!

I visited Musso & Frank's last week at lunchtime on Tuesday. The perimeter booths were filled, but the entire, traditionally packed central section of the large room was empty! We are in a recession, no matter what the Bush Administration thinks.

Yeah, what designates the fried ham as the "artists special"? Maybe the ham has a hole cut in it so it's the shape of a pallet..? With little blobs of mustard like paint?

And wow, tongue sandwiches and 5-cent donuts. Those were the days.

Thanks for posting this, Jenny. But remember, most of the artists told me at the time they could not afford to eat at the Commissary. Sure, the top animators and execs could. But when you're only making $12 to $18 a week, 35-50 cents becomes a significant cost for your budget.
Artists of the time told me before the Strike raised wages, most artists brown bagged it or went out to the Roach-Coach truck on the street.

Of course you're quite right, Tom-thanks for the comment. All a person has to do is watch something like Sullivan's Travels" to get an idea of the difference a mere dime made even as late as 1940 or so.

And many thanks to everyone else who wrote to say they enjoyed looking at this relic. I've just received the Disney Commissary breakfast menu, too; it's smaller but in mint condition and with artwork just as appealing that'll speak to everyone across the years. I'll post it later today.

I'm think that when I ate there in the 80s the menu still had the same artwork - or am I Disney-dreaming? Obviously the prices would have been a bit different!