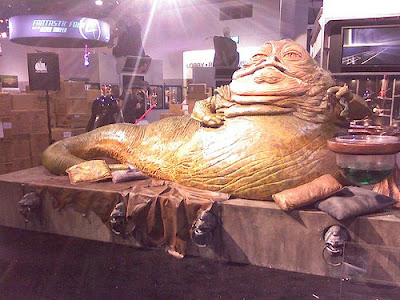 Normally I'd eschew a post of this kind--there's not much that's news in it--but this year the animation-to-comics quotient is going to really spike, and moreover while I'm a longtime daily reader of the New York Times and enjoy it, although occasionally their take on the doings of our west coast seem, well...a little clueless. Late to the party as it were.

Case in point: today there's an article that deals with Hollywood studios' presence at the annual San Diego Comic con. While the piece is titled "Comics Convention Beckons Hollywood"(click the title to read it in full), the print version adds a sub-header: "The film business grudgingly courts fans in San Diego". The internet version looks even more askance, using this: "Hollywood still leery of Comic Convention".

It's exactly what you'd expect. No cliche about unwashed bodies goes unused. One of the accompanying photos online (there's none in the print version) shows an overweight, bespectacled teenager sitting cross-legged on the floor engrossed in his reading material,paper receipt dangling from his mouth. Reference is made to something called "Con crud" which it's suggested is either a common cold or an STD. Ugh(I suspect that the Con magazine that offers numbered "tips" and cites the aforementioned "crud" is probably meant to be a little more humorous in tone than the Times presents).

The overall slant is that a motley, frighteningly crowded contingent of cosplay folks and "fanboys" are "grudgingly" catered to by an unwilling Hollywood. It bemusedly describes things that go wrong (example: Joel Silver was actually kept waiting last year while star Kate Beckinsale claimed to be held up at a railroad crossing-no doubt the gospel truth as anyone knows who's been to the Con and tried to cross the street when the crossing arm goes down; the thing seems to take a minimum of 35 minutes each time). You'd think from the overall tone-studio people are desperate to get in and get out as quickly as possible-that the City of San Diego, is, well, perhaps a little plebian.
Actually the downtown area that surrounds the convention center is a Seattle-like, revitalized district featuring a lot of great restaurants and pubs and an enjoyable sidewalk scene not often seen in Los Angeles save for a few blocks of 3rd street, Robertson, Melrose or the Grove-familiar haunts of Business players(and I daresay Times scribes).

But back to the picture painted of ComicCon: while we get the travails of this or that company and their booking acrobatics, no mention is made of the extent that arguably the most powerful(certainly the most world-famous)director in Hollywood, Steven Spielberg, went to last year to do a live feed to the convention from the set of the then-filming "Indiana Jones and the Kingdom of the Crystal Skull". The SRO crowd was treated to a meet & greet with not only all the principals- Harrison Ford, Shia LeBeouf, Ray Winstone-but the confirmation by Spielberg officially for the first time the casting of Karen Allen. No, in lieu of any of that proof of ComicCon's importance we get a focus on a production company called Summit Entertainment-an outfit with a slate of titles I've never heard of. They're probably niche fan properties.

Neither was there any mention that "Iron Man" was represented last year by stars Robert Downey Jr. and Gywneth Paltrow and director Jon Favreau, all of whom have been to the snarkily compared Cannes film festival many times also, I'm sure.

No mention of "Hulk" star and writer Edward Norton, prince of the Serious Acting school of critics(with whom I agree-he's good) who also deigned to go to San Diego for his Con appearance and panel in '07.

No Pixar, either, although as far as I am aware Pixar for years has maintained a strong presence there, planning panels featuring its most well-known artists and directors, plus peeks and premieres of upcoming work.

I wonder how much more significant contributing film honchos could get than Spielberg, Lasseter, Bird, Lucas...yet none of them are mentioned. Nor is there a mention of Matt Groening, Bill Plympton, JJ Abrams, and a host of others I can't think of off the top of my head. Not chopped liver they. Remember, this is all just last year I'm citing, not a 10-year span of attendees. One year.

The fact is, for a lot of people who aren't your sterotypical comics geek the Con has become cool; it's a place to gawp, buy, and party-and not at Ralph's either(another mention in the article presumably showing how low-rent the affair skews).

I'd bet writer Cieply has never attended San Diego himself. He seems to have approached this article armed with a dated, preconceived notion of what a crowd attending something called a "Comic Con" would be like-and he was only partly accurate.

How much more intriguing if he'd been aware-and related to the readers-how a humble, standard annual comics show became over 20 years a mega-marketed, serious venue that makes clear the reality of pop culture's cross-pollination in its most egalitarian and visible form?

Instead it's merely a brief story about the supposed discomfort that Hollywood must endure to market to the sorts of people who buy tickets to "blockbusters". Sure, there are plenty of sweaty bodies-I'm sure I've been one since the heat is fierce in San Diego every year and the Convention Center main exhibition room always seems overloaded with attendees. Yes, there are people in costumes, which I always thought were great fun to look at. Yes, the Con is a ridiculous, hot, impossible to navigate, frustrating carnival of giant Lego Chewbaccas, crazy walkaround things, killer backpacks on oblivious collectors, nerdy crazy people, cool crazy people, artists, scenesters, lots of camera crews and a terrible din of a million people all talking at once. It's terrific fun.

But what's also there is is an every-growing contingent of film professionals-mostly from animation-who are presenting their own work alongside the huge players, offering self published books and toys as well as other merchandise they've designed, some of which are substantial businesses; former and current Disney, Dreamworks and Warner Bros animators' companies such as Conduct Happiness, Electric Tiki, Red Window, Red Tango all selling, networking, and in general having fun amid all the chaos; it's been one of the places that, love it and/or hate it, is a place to see and be seen and meet up with old colleagues. 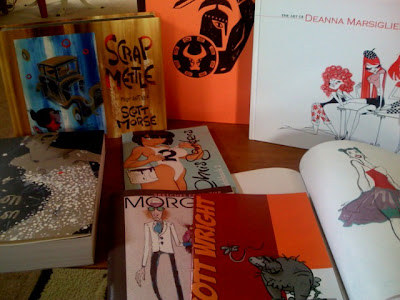 some of last year's haul, and a big part of why I and my friends go to the Con

Given the people I know of this year presenting their own books, prints and wares there's a good article to be written about the crossover between the graphic books of the past and present and the people whose graphic work is usually employed in big-budget "Hollywood" animation doing their own small-press thing.

And you know, all of us are geeks if by geeks you mean lovers of cool stuff yearning to see new and exciting work of all kinds-be they filmed, drawn, sculpted or written. In that sense we have a lot in common with the non-pros sitting cross-legged on the floor. By the way, I confess I've done that myself as have most of my (adult) friends. That's because there are no other places available to sit in the Convention Center.

Michael Cieply-why don't you come on down? The train is a great ride.

See you in San Diego.

You should configure this as a letter and send it to the Times, where they will see it...

They did a first-person article last year with a staff attendee, and was disconcertingly fawning over the we're all geeks aspect - whiskey, tango foxtrot? I've heard rumors New York would like the Con after the contract runs out, so go figure. Hope it stays here, and stays growing - the more the merrier, I say. Altho it was a hoot in the old days to rub elbows so easily with so many artists that are now sadly gone - Kurtzman once signed my program "EC for me, see" ;-) - old age has pretty much caught up with all the classic artists, so it's up to you, Jenny, and your contemporaries to pick up the torch and run with it. The way I see it, you're doing a pretty damn good job. See you at the Con, I hope - I'm the one wearing the skimmer.

Speaking of Karen Allen, I wrote an unsolicited script for Starman 2 back in 1998. It was my first script and I quit college to finish it. It’s been gathering dust ever since. I sent it to Jeff Bridges and John carpenter, although I would prefer if Carpenter didn’t direct a sequel. I wrote some good f/x sequences and some interesting characters. I’m pretty sure I’ll never be involved, but I’d to see the f/x scene from the beach being incorporated, (Jeff’s manager Neil will know the one, totally plagiarised from another movie, but it would look great on film today). If anyone has any questions, email me at hansenfilm@yahoo.ie and I’ll answer them. (Although I won’t give away any plot points. And yes there is a son and indeed, I actually have the perfect casting suggestion!!

The notion that Hollywood is averse to dealing with ComiCon is at least a dozen years out of date, as you assert.

How funny and pathetic is it that they write an article like this, ridiculing those fans like myself, in a very offhanded way.
Completely neglecting to remind readers, or themselves for that matter, that those fans tend to grow up and have some pretty good jobs and discretionary incomes that allow them to float and direct the film and animation industry at a pretty good clip.
I think that it's safe to assume that this is the reason why we're seeing such an increase in comic book and animation movies lately.

It's like they said in Revenge of the Nerds there are a lot more of us than there are of you beautiful people. I think that its time that people woke up and took note of that fact.

The Motion Picture business left New York to come west -- where the weather is perfect and the people are beautiful -- just about 100 years ago. They've never recovered and have spent all the time since gnashing their teeth in envy. The Times piece is typical. Go Comic-Con!