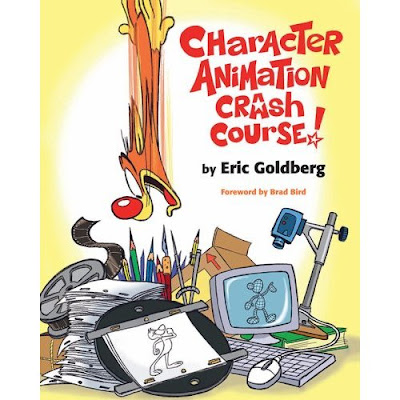 "Character Animation Crash Course!", a brand new book by legendary animator, Freddie Moore expert, collector of exquisite stuff, sage and all-around nice guy Eric Goldberg is on its way to the bookstores in a few weeks.

Here's the official description from the publisher, Silman-James Press:

Character Animation Crash Course! is a veritable Genie's lamp stuffed with everything the aspiring animator could wish for! Renowned animator Eric Goldberg's detailed text and drawings illuminate how to conceive characters "from the inside out" to create strong personalities. Classic animation techniques are analyzed and brought to life through this unique book and its accompanying CD that offers readers animated movie examples that show, in real time or frame-by-frame, the author's principles at work. Add to this Goldberg's discussions of classic cartoons and his witty, informative observations based on the wealth of knowledge he's gained during his 30-plus years in professional animation, and you have a tour-de-force guide to character animation with the classic touch.

As described above it comes with not only a distillation of Eric's prodigious knowledge of the craft of personality animation but a DVD as well loaded with quicktime tests he's done himself, illustrating the principles he describes in the book--all the essentials.
Through the usual .05 degrees of separation that seem to exist between everyone in Los Angeles, I learned of this book's imminent birth while visiting the publisher at her home. Gwen Feldman is not only "Silman-James Press" but is an artist herself--she's a member of Chouinard's last graduating class in '71, former pupil of the great ones such as the late design teacher Bill Moore (about whom-like all his students-she's got some great stories). One of the most intelligent and creative people I've ever met, my husband's good friend even before I met her, she's an amazing photographer, art collector--someone whose range of interests still surprises me after twenty-some years.

Case in point: I blew a gasket when she casually mentioned a few months ago that she was publishing a book by Eric Goldberg. I got a glimpse of it completed then, and I was thrilled to see what was going to be in it. I'm sure you won't need me to tell you it's going to be a must have.
Eric's going to be debuting and signing it at Comic Con, on the Friday and no doubt at several other venues in Los Angeles as well. I'll add more details as I get them. For now it can be pre-ordered at Amazon and through the Creative Talent Network's portal.

Can't wait. And some guy named Brad Bird wrote the forward, too.

wow sounds like a treasure for animation study and fun to read and watch. thanks for your last posts, a lot of stuff to look at and learn!

Woo, thanks for letting us know about it!! Sounds amazing!!!

thank god, I've been waiting for him to finish his book for 8 years now. glad it's finally happening

I managed to snag photocopies of some of Eric's notes on animation when I was at Disney, but they're nowhere near as comprehensive as this book. I can't wait to see it.

Very cool–I’m definitely buying it. I had the honor of watching Eric Goldberg draw in person, he is truly one of the giants in animation!!!

Any word if Eric will be doing a NYC signing?

Larry-I don't know about NY or any promotional junkets; I'll see what I can find out.
For the forseeable future Eric is very busy animating (in 2D) on "Princess and the Frog" at Disney, so I would have to imagine it'd be very hard for him to get very far from work for signings. That said I hope he can and does.

Everyone else-thanks for your comments! I know I gush but hey, it's Eric!-and I was so bowled over to discover this was coming out. I've been sitting on the info for a while now.

Very excited to read this. I was able to do a few live events with Eric and Susan back in our Disney days. In fact, I use his sketch of me as Genie as my Twitter icon. A great talent.

I've been waiting for this book to come out for years! This will be the most animation-teaching bang for the buck around. Guaranteed an instant classic.

Just a quick heads up, I found out Eric Goldberg will be at SAMUEL FRENCH THEATRE & FILM BOOKSHOPS in Studio City. Wednesday August 6th, 7-9pm for a Booksigning and Author Reception for his new book "Character Animation Crash Course," which is available there now!! $35.00

Hope to see you there!

Amazon has bumped my order. This is in the stores? Ugh, what's going on.