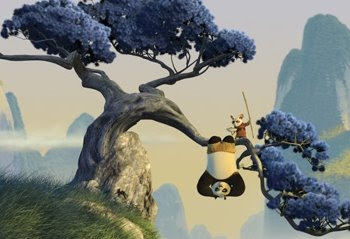 I don't often do this (in the interests of recusing myself from places I've been associated with), but I want to congratulate the crew of "Kung Fu Panda" on a simply top-notch achievement. It has beauty, personality, and most of all sincerity. It's a real highpoint from Dreamworks, and I'm one of those who believes (actually, there are quite a lot of us) that anyone raising the the animation tide lifts all boats.
I didn't work on it but I know those who did really pushed themselves-plainly to great effect. I only wish I had some artwork handy to post here, because so far nothing I've seen online does the visuals justice(anyone have any of Nico's drawings lying around?); These images taken from a review site will have to do.

I look forward to seeing it again and taking along friends and family. Good show, people. The movie is looking beautiful. And your metaphor about the animation tide is great.

The Art Of ... book has some great stuff in it , including a lot of Nicolas Marlet's designs.

Variety had an interview with him and posted a small web gallery of his designs:

Yup, the movie kicks butt! I found a pretty cool asian poster for it:
http://bp3.blogger.com/_itxeexAFd4U/SDwz1c7MngI/AAAAAAAADao/mrvwRYnw9YI/s1600-h/kungfupandap.jpg

Saw it last night. Please give your colleagues my congratulations. Wonderful job!