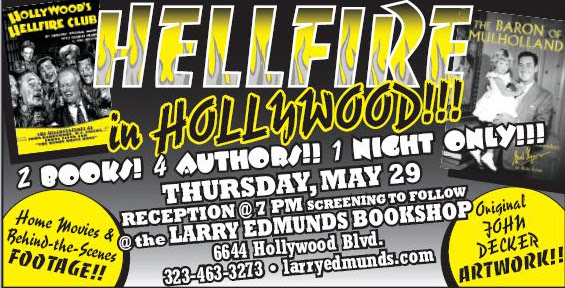 Tonight at 7pm Larry Edmunds Bookshop in Hollywood is doing a book signing/screening that should be a hoot.

There are unfortunately too few people around today who've seen the best available work of John Barrymore. I knew him only as a kind of dissipated buffoon for years, until I saw both his best late films (one great 1939 example: "Midnight", directed by Mitchell Leisen, written by Billy Wilder; also the fantastic "Twentieth Century", an early screwball comedy directed by Howard Hawks and costarring Carole Lombard-don't miss either of those) and his best silents. Turner Classic Movies has shown a fair number of great Barrymores as part of their Sunday night silents, and UCLA and the motion picture Academy show rare, restored prints on occasion--always highly recommended.
But I knew the legend of John Barrymore before I knew his actual work. An unbelievable libertine, he wanted to avoid the family business of acting and attended art school instead, but he soon found that his physical beauty as well as his famous family made acting too easy an option to pass up as a living. He turned out to be good at it, even if late in life he overindulged his supply of ham. 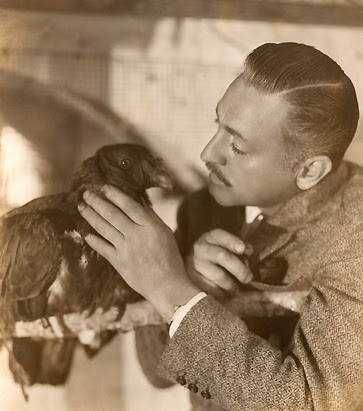 Barrymore loved all animals-the weirder the better. Here he coos over his pet vulture Maloney-possibly named after the writer who intended his gift to be insulting, but not to Barrymore, typically.

I've seen a number of his drawings and he was a good draughtsman (the one example I could find online is in my opinion one of his lesser works, done pretty late in his life). Well known as a womanizer("the great lover" as well as "the great profile"), yachtsman, adventurer and unfortunately, chronic alcoholic, he was the center of a tight knit group pf actors, writers, directors and artists, and that's the subject of a new book-the reason for the Larry Edmunds event, Hollywood's Hellfire Club, by Gregory Mank.

The other book being signed and talked about tonight, "Baron of Mullholland" is about Errol Flynn.
One of John's best latter-day pals, Flynn shared a lot of obvious interests with Barrymore-especially sailing and boozing. They also both possessed a particularly wry view of the world and a healthy sense of humor--one that Tim Burton probably would appreciate. In other words, decidedly dark. When Barrymore died prematurely(as did Flynn)largely from his alcoholism, a famous story(probably true) says that his inner circle bribed a mortician to "borrow" Barrymore's corpse and sit it up in Flynn's home-drink in hand-to greet him when he stumbled back in at 4 am. You can't make this stuff up.

At the signing there's going to be rare footage screened as well--some home movies of the actors, and perhaps some other things. Plenty cool. I've heard Flynn's daughter might be there tonight, too. Larry Edmund's is on Hollywood Blvd. right across the street from the venerable Musso & Frank Grill, where both actors and a host of other greats from the golden age of Hollywood met to drink and occasionally eat.

By the way, if any local readers haven't been to Musso's you have to go; to me it's the most old style "New York" establishment in Los Angeles--probably on the entire west coast, and has the menu, ambiance and waiters to prove it. It still attracts a lot of power players as well as old regulars of lesser clout, like myself. The martinis are sublime and deadly. Shaken, not stirred.

It's hard times for small businesses like Musso's these days-especially for independent bookstores. L.A. has so few left, and Larry Edmunds is one of them. If you're ever looking for an out-of-print book on theater or film or a rare poster or still you have to drop by Edmunds-even if you can't make the event tonight. 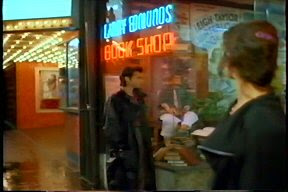 I'm a huge fan both of Barrymore and Flynn, but I had to miss the event. I haven't seen a lot of Barrymore but I've seen Topaz, Svengali, Grand Hotel, 20th Century, and a clip of him from a compilation film where he played Richard III, and they were all great. I wonder what his best silent films were.

Also F. Scott Fitzgerald, Bogart, Raymond Chandler, Howard Hawks, Ford, Hepburn, Mankewicz, Marilyn Monroe, Burt Lancaster, Jerry Lewis(I saw him there once at the counter doing schtick) Dorothy Parker...oh my gosh--literally everyone in Hollywood at one time or another. Because of its ambiance it's never really lost a certain cachet even though some scoff at the food. I happen to love great, Chez Panisse-style food, but what the hell--Musso's STILL has a great grill imho: the chops, steaks, their grilled cheese sand and their cream of tomato soup-not to mention their chopped house salad and homemade sourdough bread--are fantastic and not to be duplicated. I vociferously defend the place because in the last decade some foodies and critics love to diss it as if it's just a dump, which is untrue. Madonna still goes there, as does Johnny Depp, as does most of the the reps in L.A. and a host of directors and writers. Except theres no pretension.
Anyway, I like it. Bet you couldn';t tell. ; )

Eddie: I've not seen all of Barrymore's extant silents to be sure, but I'd highly recommend these:

The Beloved Rogue. Don Juan, When a Man Loves and Beau Brummel(which was just on TCM a month ago; the others I've seen mostly at UCLA when they run their restoration series, etc).
I couldn't go to the event either, though I had planned to--the "Kung Fu Panda" crew screening and party were the same night. At the old Chinese and the Roosevelt across the street--fantastic party! I was told they had a great turnout for the Barrymore/Flynn thing, though. : )

What a list! Many thanks; I wrote them down! Now if i can only get to see them somehow....