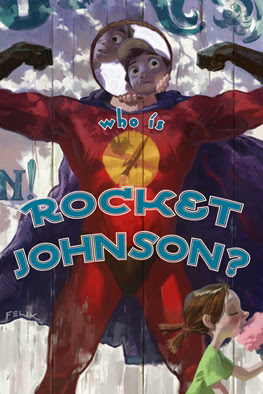 From Paul Briggs here finally is the announcement of a project that an awful lot of guys have been working on in their spare time-of which they have precious little. Nevertheless, somehow they all pulled it off.
I was lucky enough to see most of the book and it's a must-have. Talk about a roster of names; some very familiar, some you may not yet know-but all have done terrific work.
Here's Paul's email press release:

"Who is Rocket Johnson?" is a 72 page graphic novel anthology being self-published by Walt Disney Animation Studio's Story Artists and Directors. It's an all-ages book in which every artist answers the question: "Who is Rocket Johnson?"
It will be sold exclusively at booth 2302 in San Diego (http://www.comic-con.org/) and is a limited edition of 1,000 copies.

That's some lineup. For more information visit the official website.

Edited to add: Briggs informs me that at the present time there aren't any plans to do more than 1000 copies, take advance orders, or do any mail order at all. That means that if we want one we'll all have to plan to be at the Rocket Johnson booth at San Diego during the Con-probably early in the week. I feel positive that sketchbook resellers such as Stuart Ng and Bud Plant will be picking up multiple copies to offer at their own outlets, but with only 1000 available to begin with those too should sell quickly. I have to think it likely that when the initial run does sell out, more will be printed-eventually. But for now look for it only at the Con.

Looks like something else to buy at the Con!

Jenny,
I am a huge fan of the work of Mike Gabriel.
Do you know what he is doing these days?
Obviously from this post he is at Disney again but doing what?

I'm definitely gonna try to get a copy at the Con this summer, but chances are they'd be long gone before I even got to the booth. 1000 copies is such a small amount, especially when it's at San Diego Comic-Con of all places.

Oh well, I'll still give it a shot!

WhoisCrockettJohnson ? What's all this talk about Crockett Johnson ? The guy who drew Harold and the Purple Crayon of course ... oh...
never mind.

(with apologies to Gilda Radner and Emily Litella)

Seriously, looks interesting. I hope Stuart Ng snags a few because I don't think I'll be at ComicCon this year.

I'm so excited! And a Paul Felix painting to boot. I can't wait until comic con.

I hadn't read the list of contributor's very well - I work with Nathan Greno's father, how strange is that? See ya'll there!

I was Nathan Greno's junior high school art instructor in Kenosha,Wisconsin.Great student and I am happy for his success.Keep up the great work.