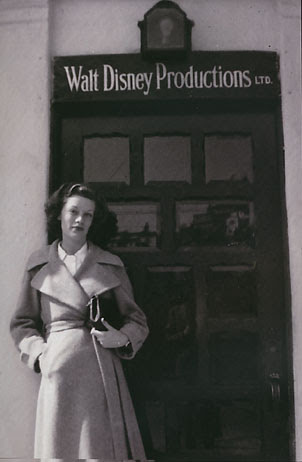 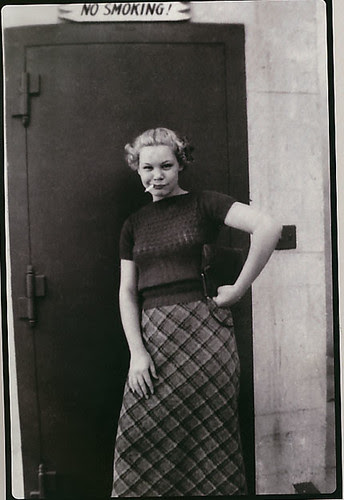 ...and this girl looks like a cross between Bonnie Parker and a very young Jane Wyman(when she was blonde)-what a stance! 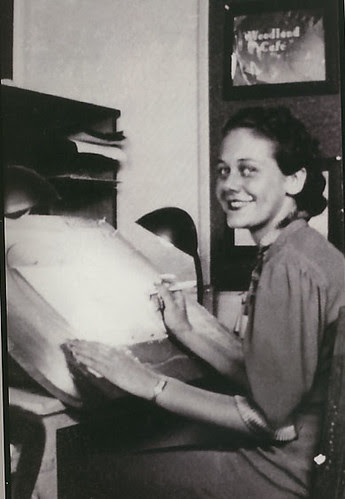 Doesn't she look happy? The implement is in her hand is an airbrush. Notice the Woodland Cafe title card on the wall-a souvenir? This desk by the way is far superior to the unpartitioned inkers' tables. 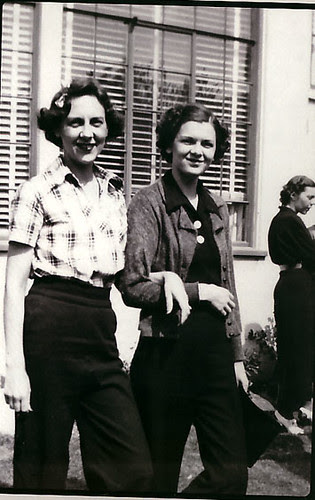 Here's real sportiness! I love these outfits. Kate Hepburn gets too much credit for wearing "daring" slacks in the 30s, based on this photo. Perhaps this was taken on a Saturday. Disney staffers worked a half day on Saturdays-standard hours even for live action actors and production people in the Depression era.

These were taken at the Hyperion studio, circa 1936-37.
All this and more were scrapbooked (along with a wealth of discarded drawings, color models, doodles and company memos) by a girl with the unlikely name of Ingeborg Willy-a young woman who obviously loved her animation job inking in the best studio in the United States. By the way-none of the women pictured above is Ms. Willy, I think-she was holding the camera.

These come from the collection of Robert Cowan(see below), who acquired Ms. Willy's scrapbook in 1998. He made an absolutely lovely job of printing up a facsimile and offering this rare scrapbook at cost, thinking that he'd like to share his find with interested parties. Only a very few were ultimately sent out(Hans Perk writes about it in more detail here), but it may yet be reprinted. I'm very lucky to have it to hand and glad to share a few of these snapshots with you. 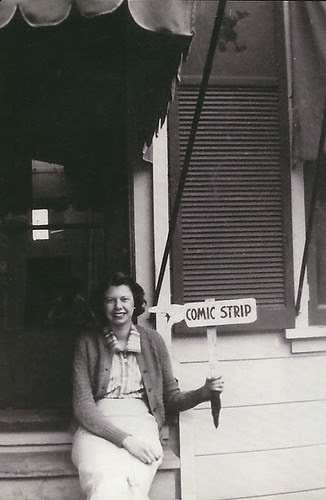 Like her freshly uprooted sign says-here's the Comic Strip Building. This is one of the very few Hyperion structures that survives. It was moved to Burbank as the new campus was being built and is still on the Disney lot today, used as a freestanding conference room near the front gate. The silhouette of Mickey on the building's shutters was a nice touch. Ingeborg herself seems to be reflected in the doors of the bungalow, looking down into her camera taking the picture.

If these were pictures of women working at an unknown studio-or at any other company-in 1936, I'd still be fascinated by them. That they're Disney employees-and the all-too-rarely-seen ink and paint contingent at that-makes it a thousand times better. I collect vintage materials of all kinds and often while browsing through boxes at an antique mall will find snapshots like these; I think they're great. As I wrote in my comments on another blog about this book, these bring the times of 70 years ago to life, making them real and accessible and so have a wistfulness about them.

Was it as hot that summer as it is today? There wasn't smog in 1936, and I've read that a person driving from Pasadena to Silverlake could smell orange blossoms.
Well, sometimes in early spring when the temperature is just right while driving along the 2 freeway you still can. But there's a Gelsons market where the Walt Disney Studios sign with the waving neon Mickey Mouse used to be. And pretty much nobody has time to do their hair like this before work. On the other hand, those expressions look awfully familiar. I wonder what their stories were and how long they each worked at Disney's? Southern California's probably full of the grandkids of these women, somewhere. 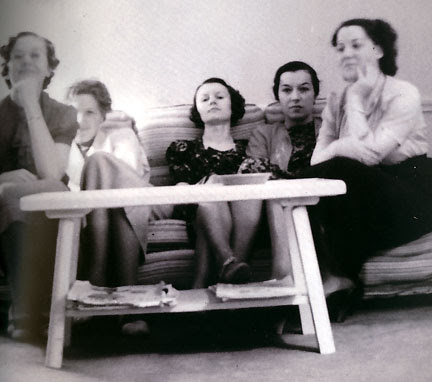 Jenny- It was fascinating to read your blog on the photos. I think each person that has reviewed the items in the scrapbook has brought an interesting perspective to the whole period. I appreciate the time you took to look over and share the images! Thanks!
-Bob

That break time photo looks amazingly modern with that blurring and bad lighting! Nice eye candy. Thanks for sharing!

Thanks for sharing thses with us. I love seeing shots from the old Studios. Especially the "normal" people that worked there that helped make the animation so amazing!

Thanks for posting these. Now that the book isn't available - post as many as you can!

I love these photos! Thanks for sharing. What an amazing window into these gals workdays. They look so remarkably like modern women with those attitudes. :)

Thanks for sharing. You post up such interesting things.

I don't know what it is about the smoking gal, but I am totally infatuate with that photo.

It was real interesting to read about the Disney Girls;) And I love seeing all their outfits!! Thanks Jenny! ~K

Thanks for posting these Jenny.

I was kicking myself for not ordering the scrapbook from Robert Cowan as soon as it was announced.

Whenever I see photos like these I immediately regret all the photos I never took as I've been working in the industry. I have some photos from wrap parties and the like, but only a few of typical days at work.

Great post, and as always wonderful ruminations on those photos, Jenny.

Terrific! So many personalities that would be fun to know more about!

The photo of the two girls linking arms - could the one on the right in the sweater possibly be Marie Johnston? It certainly looks like her to me.

Love IT Love IT!!!!
These photos and your insites are great!! I especially love the one of the blonde smoking, her expression makes her look like Ward Kimball's cute younger sister!!
So Great!! You rule.

What great photos...as the years go by more and more of the "real" vintage Disney life comes to light, doesn't it? As time goes on people are more candid and open with their recollections of people, and the internet helps spread great pics like these around. Would you or I be in one of these photos back then, I wonder!!!! :)

fantastic! these are some great pics- I love some of their expressions!! So nice to see some of the original working girls from early disney; thanks so so much for sharing!!

dude, that bottom one is BAD ASS. they should make a "women of disney" book and this should be the cover. by john canemaker. or someone.