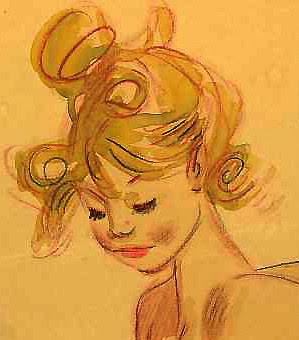 I have two original watercolors by Fred Moore, done at the same time and owned by the same person(anonymous to me); one is framed and on the wall, the other--this one--is put away. It was done on very thin, fragile paper, and either Fred or his recipient (as I'm sure this was a gift) mounted it onto a piece of cheap cardboard. A few push pin holes at the center top suggest that one artist or another at Disney's or Lantz's tacked this up alongside their working space. It's full figure, but too large to scan the entire thing here, unfortunately. 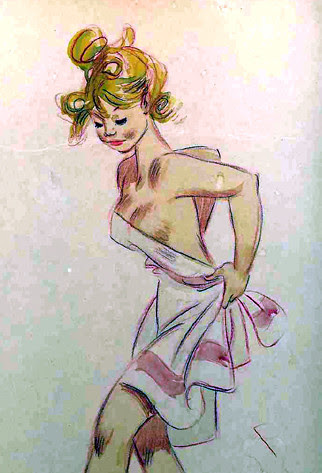 Of course I'm just making a flying guess but I think this is probably from the mid to late 40s. If you could see the whole figure(damn!), you'd see the lovely weight as she slips on a mule with her left foot...the position of her right leg...it's really faultless. And yet I'm sure, from looking at it, that he really whipped it out. The paper didn't take watercolor too well, but he went ahead and made some accents on her towel, hair, a few shadows, and gave her her skin tone.
While it would seem that after thousands of these drawings, Fred could virtually do them as contour memory pieces, what saves it from being banal as many "girlie" things can and could be is his personal style: the tiniest hint of a belly defined by the towel, the curves in the underarm as it bends backwards--and not least the elusive, bemused expression he gave her. She also seems older then the almost baby-faced child-women he often drew--see the earlier post of centaurette head studies he did for "Fantastia" as a comparison. Certainly her figure is mature.
I apologize for the scan quality--the paper has yellowed a lot, and making some adjustments gives the background that flashbulb look. But I thought others would get a kick from it.
Fred Moore, pinup, animation, drawing,
disney,
cartoon,
life drawing

Man I love that! On a side note, I was at the not-so-famous celebrity autograph show at the Burbank Hilton yesterday. They sell alot of old movie posters there and this one guy had a box of old drawings on animation paper. So naturally I was inclined to look. He had some amazing stuff, they were mostly studio doodles but they were signed by guys like Ward Kimball and Grim Natwick. Very few production drawings but mainly caricatures and crazy animals. I was cashless at the time but man I was willing to trade my car for some of those drawings. They ranged from only $100 to about $300.

And what a kick !

You continue to surprise and delight with your bag of Fred Moore (and more) goodies, Jenny.

(the drafts , the drafts... I regret that before Disney Orlando shut down I didn't have time to make photocopies of all the drafts . The Orlando studio reference library had a complete set of most of the features and dozens of the major shorts . Hopefully those drafts made it home to the "morgue" in L.A. and didn't just get tossed into the trash dumpster, like the boxes of Blackwings that are alleged to have ended up there, but let us not speak of that ... )

Chris: Wow! Sounds like a real trove you found there. I guess this means I'm going to have to brave the ancient celebrity gauntlet next time! Thanks!

Dave--good grief! I would hope it all made it back to Burbank safely! What a great system that was and is(they must be done for 3D, too, hmm?).
Glad you're enjoying the stuff--it's a treat to be able to do the ol' show and tell. : )

btw, I got this copy of the "Nifty Nineties" drafts on Ebay! Imagine my shock...very odd. They are definitely from the time period, and I sure hope this isn't a "missing" copy(when I'd do Fred Moore research in the archives Dave Smith kindly provided me with the drafts from Fred's key features so I could determine which scenes he'd done)!

thanks for posting these beautiful freddie moore drawings. they're so inspiring.

Wow! those are great drawings!