On another Sunday, 78 years ago today... 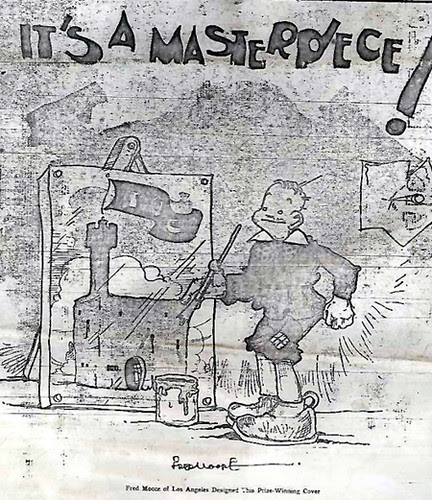 I have to get a better copy of this. But this is the original printout from the microfiche I made at the old downtown L.A. Central Library back in 1981. I knew from his self-penned bio in the "Dispatch from Disneys" booklet ( a one-shot the studio had printed up and intended as a mini magazine for animation staffers overseas in WWII) that Fred Moore "won many shiny Junior Times buttons for his efforts", submitting illustrations for a children's insert the Los Angeles Times had in their Sunday editions. This was the only one I could find; the LA Times' archives are far from complete, and the old photos taken for the archives were often poor quality to begin with.
I almost wasn't going to post this until I noticed the date: it was published exactly 78 years ago today. Synchronicity! Or something.
Fred Moore was 16 in January of '28. His style is obviously influenced heavily by the "Mutt and Jeff" school of cartooning, and it's very adept.
But he came a long way from this to the three little pigs, Dopey and Lampwick within 10 years.

The kid who drew this had never animated in his life...yet. But in another year or so, and his first job in the only profession he'd ever be a part of--animation--he'd find his real metier.
disney, animator, cartoon

What a fantastic item! Wonderful post; all of your Fred Moore pieces have been great.

But that Disney picture is beyond belief; I go back to look at it everyday. It has to be during the strike.

Amazing Blog !
I love all of the stuff here. The sketchbook drawings are Wonderful!

Thanks guys--Michael, I agree about that portrait--arresting, isn't it? It has the same effect on me--for years!

Victor--thanks for coming by and commenting, and for the nice words!
-Jenny

Love your blog! And I love this drawing.