Fred Moore and Ward Kimball-more from the archives 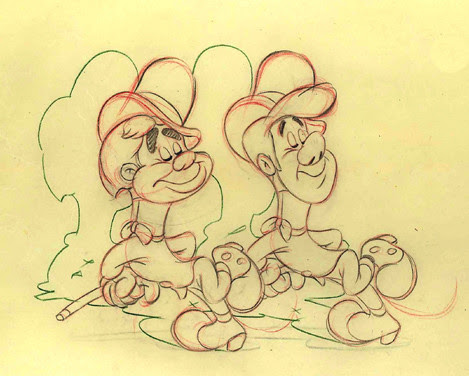 An animation drawing by Ward Kimball from "The Nifty Nineties", a gay 90s themed, plotless Mickey short that served as a gap assignment for some of the "A" animators who were between films (in this case "The Reluctant Dragon" and "Dumbo").
Ward loved doing this vaudeville number, caricaturing himself (on the left) and his buddy Fred Moore dancing to "Swanee River" and telling terrible jokes. They provided their own voices. An example:
Ward: "Hey, Fred! Who was that laaaaady I saw you with last night?"
Fred: "That was no lady--that was my wife!"
Mickey and Minnie dissolve into paroxyms of laughter in the audience

I love looking at this thing--the creases on the left side indicate lots of flipping. When I spoke to Ward about this I was told he cleaned this up himself. The underdrawing(in red)is there but is quite faint.

Interestingly -- at least from a trivia standpoint -- "The Nifty Nineties" was the second cartoonm in a two month period in 1941 to come out with a characture of Kimball. Thanks to Robert Givins and Friz Freleng also ended up providing the face of Hiawatha in Friz's first Bugs Bunny short, "Hiawatha's Rabbit Hunt."

Man, I love this drawing. There's something about Kimball's lines and shapes and the way he animated. Everything about his look and style, animation-wise and otherwise, was wonderful.

I've thought since posting it--why the heck didn't I write more about the drawing--as a drawing(not to mention the scene, which is great)? I get such a visceral enjoyment from looking at it...just such great volumes, joie de vivre--and a generally yummy quality.
: )