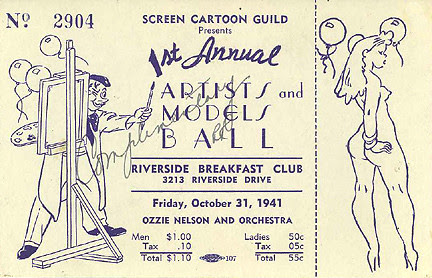 Pretty self explanatory. Somewhere out there, in someone's family album there are photos of grandma or great-grandpa cutting a rug at this party. I'll bet it was a blast.
This was tucked inside a folder I have marked "Disney strike 1941" in grease pencil; along with it were the photograph of the picket line posted here earlier, and dozens of the daily mimeographed updates given to the strikers in the park across from the studio(if I'm not mistaken, where St. Joseph's Hospital is now). If anyone's interested, I'll put up an example of one of them later. They're pretty crude, and the small single-panel cartoons(frequently showing Disney with his studio lawyer, the infamous Gunther Lessing) often have captions whose significance is lost on me but surely got a bitter laugh from the strikers.

Really informative blog! What movies have you worked on?

Hi Chris--thanks for coming by! As for the resume--well, for DW: El Dorado, Shrek 2, Shark Tale, Flushed and now Bees. : )

Great blog!
Note the orchestra: Ozzie Nelson who had quite a good "sweet" band in the 30's and 40's, in his first career as band leader (before he gained his radio-then-TV show and additional fame as Ricky Nelson's Dad).

PS I love the stuff about the animator's strike.