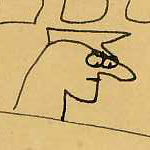 We had a lot of old Virgil "VIP" Partch paperbacks lying around the house during my childhood. I thought the drawings were kind of...ugly, but I still liked looking at them(kids!).

So I was shocked to learn, years later during my Fred Moore research, that Partch had started his career at Disney's, of all places, palling around with Ward Kimball(no surprise there)and Fred in the golden age. It's interesting to think, given his utterly unique style, exactly how he fit in at Disney's, but his education at the Chouinard school suggests a great foundation in classical drawing.
He was a huge success a single-panel cartoonist at The New Yorker and elsewhere for the rest of his life, and while there were others with bizarre tastes in humor(Charles Addams, for one), he stood alone, really, and still does.
Here's a rough from VIP, a submission(his home address is penciled on the reverse)that I suppose upon acceptance would have then been cleaned up and inked. The things one finds at the San Diego Comic Con--this went for about 20 bucks. It's in poor shape, but still a fun slice of history. From the man himself! 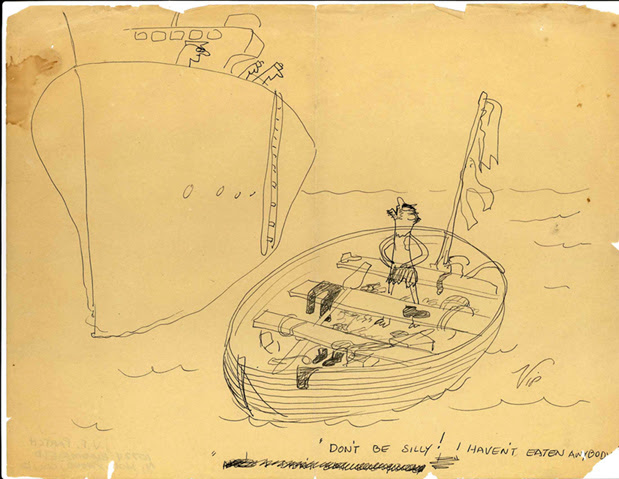 Your drawings are awesome!! sooo expressive!

Love the stories in your blog!! Great posting!

Hi Jenny, I'm really loving your blog. It's such a refreshing addition to the existing blogs. My first exposure to Vip were the few drawings they had in the Illusion Of Life. His drawings have such a great deal of expression but are so simple at the same time. Great stuff!

Chris--likewise, thanks for coming over & reading--I'm happy to be able to please! I had totally forgotten that VIP was in Illusion of Life-man, I'd better reread that book(it's been a long while).

I managed to get a nice three-color drawing at one of those Texas auctions. It's called the executive, and depicts a luxury boat topped with the captain at his desk. Assistants and everywhere, and a suggestion box is mounted on the stern, with the slips emptying into the water! I don't think it's signed, but it's still pretty cool.