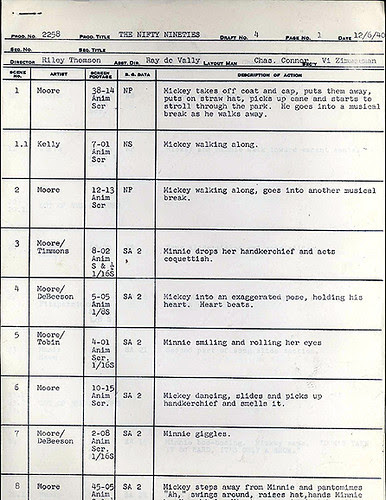 Apropos of the "Nifty Nineties" drawing below in an earlier post, here's something else I found the other day(the neverending chore of unpacking after a big move has its rewards): the "drafts" for that very cartoon. Disney's kept these records of who did what for all their features and shorts, broken down by scene. The first name listed is the animator, the second(if there is one, in the same box) his assistant. I have the whole thing; this is page one of six which contains the record of the only animation Fred Moore did in the film, a few early scenes of Mickey and Minnie in the park, done in time to "[I Was] Strolling Through the Park One Day". Later pages show that some very streamlined, elegant Mickey animation was done by Walt Kelly, and David "Bud" Swift (or as Ward Kimball kidded about it, "Dave "don't call me 'Bud'! Swift"), later the director of "Pollyanna" and "The Parent Trap", contributed some business with a horse doing a take, and animation of Donald, Daisy and ducklings riding a bicycle. The last scenes, with the mice losing control of their flivver, was done by Claude Smith--later a well-known New Yorker cartoonist who signed his cartoons as "Claude".

This is fairly esoteric stuff but I'm very glad Disney did this; I doubt whether any other animation studio bothered.

Generally speaking, I'm not a Mickey fan, but I am a huge Walt Kelly fan. Now I have to go dig up that cartoon. Thanks a lot, Jenny! ;)

Just when I think I've seen everything Disney you whip out some more awesome stuff. Keep it coming 'cause I'm eatin it up!

Hee--John(?), I think "Nineties" is on the Pollyanna DVD, and I know it was on a VHS collection of Mickey shorts ages ago; it's a real "trifle", but well worth it for that Ward Kimball interlude; also, the animation Kelly did on Mickey, though brief(according to the drafts), is the most appealing and fluid in the cartoon(yes, you heard me right, me, the Fred fan).

hi jenny,
i love your blog. i might be wrong about this, but i am pretty sure that the other name besided the animator listed in the draft is the FX animator of the scene(rather than the animator's assistant). to my knowledge, assistant's were never mentioned in drafts, only character and effects animators.

Hi Anon and thanks for coming by and the nice words. You know, I believe you are right--I'll edit the post to indicate that--thanks!

I had a nagging feeling that that might be the case, but I (d'oh!) ignored it; I think someone, once(perhaps Dave Smith at the archives?) told me the other listed person was the effects animator, or maybe I read it in a book somewhere...honestly, I wasn't sure and what befuddled me is that the scenes listed, as far as I remember, had only character animation in them, nothing else. Perhaps there are trees rustling/flowers swaying in the BG? I guess there must be!

I'd better get my facts right next time! : )
But this is the next best thing--to have good info from readers--again, thanks!