Man Alive! a story panel, for a change... 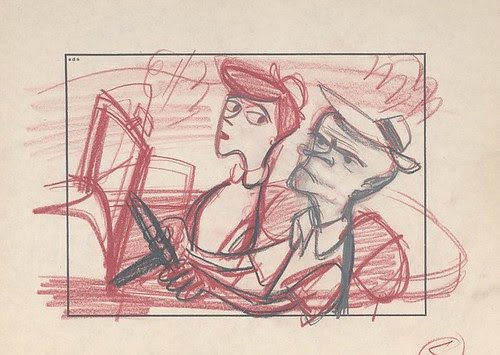 I just bought this storyboard panel from a 1952 UPA production, "Man Alive!", directed by Bill Hurtz(according to the Internet Movie database, that is--someone correct me if it's wrong). Nominated for an Oscar for best documentary short--this was apparently done for the American Cancer Society. I haven't seen the film so I don't know if it was a brief cartoon segment or simply part of a board done for the live action; if so, it certainly is a stylized couple.
Edited to add: Amid Amidi added some information on "Man Alive!" in his comments, including news of a screening of this obscure film in Hollywood in March--worth looking at-click the "comments" link.

Jenny - MAN ALIVE! is one of the films that'll be shown at the big UPA tribute at the Egyptian on Sunday, March 26.

Also, check out the entry for my Chronicle book. The still shows what the finished cartoon looks like.

Thanks, Amid--well, those designs changed a bit! I'll have to see that screening(thanks also for the reminder). I guess, then, that the entire short is animated,not just segments? Can't wait to find out. : )

Yes, the short's animated. I can see why they modified the man's design. He's a bit harsh in the boards, and doesn't have the 'average Joe' appeal that audiences might empathize with. Not sure if you got this from Van Eaton, but they have a couple more panels from the film HERE.

You're right about the designs...but I like this guy; he really must be a dead-on caricature of someone there, wouldn't you think? Looks like some of the (loveable) curmudgeons I work with--or know, lol.
Yep, found it at Van Eaton--thanks for adding the link, even so. They often have some interesting off-beat stuff, but I rarely look around any more.

Funny! I just was drooling over some of the panels from the same sequence the other day when I was at Van Eaton on Ventura!