Technology will do it all...or not

This morning's(10/15)New York Times has another in a type of article that seems to bobble to the front page of Arts sections like a piece of balsa wood, every few years for at least the last 15: "Cyberface-a new technology makes animated figures as expressive as SAG members. Is this the birth of filmmaking's new era? Or the death[dum dum dummmm!]of the flesh-and-blood actor?" 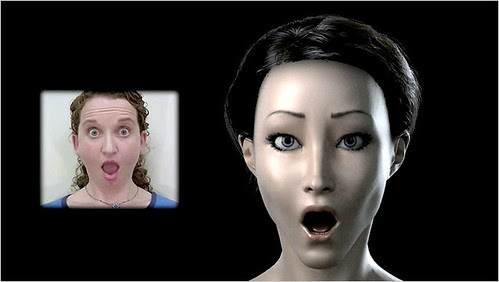 The illustration accompanying the article. The gulf between the live model and the digital version is self-evident. Copyright 2006 The New York Times Company


Start merely with the title, in its large pica print trumpeting breakthrough!: a "new technology"[really?] that "makes" animated figures[the reporter is really referring soley to expressions of the face, forget body language for now] "as expressive as SAG members"...oh, indeed? I guess that's settled, then.
Or not.
Because the examples shown, heavily surfaced and rendered as they are next to mug[ging] shots of the models scanned and used for the final "animated" faces, are inarguably about 75% more pliable, expressive and interesting to look at than the offered, supposedly "more animated" digital versions.

In other words, here we go again.

And reading on, we get the old canard, trotted out for as long as these pieces has been published, that with this new technology all it'll take to resurrect Marilyn Monroe is, well, to use this copyrighted software on her. This is so patently silly that I hardly know where to start. I won't begin as an animator, just as a hardcore movie lover and admirer of such actors on film as Marilyn--a woman who in my opinion was much more talented than she's usually given credit for, even in these revisionist days.
She's also one of the most famous icons of pop culture--up there with Chaplin, Bogart, Bugs Bunny and Mickey Mouse: recognized worldwide by people who may have never seen one of their films. So, a software program will map "any character virtual or human, living or dead" and transpose a performance so that it looks like Marilyn herself is doing...what? 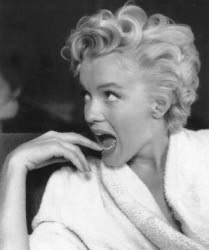 Here's a huge point hat I have yet to see addressed in all of these breathless articles that read like press releases:
who exactly is going to be the designated brain of Monroe? Who's the ultimate expert on what Marilyn would do in a new situation?

I suppose a top female impersonator like Jimmy James would be of some help, but he channels a pastiche of things MM did in "Gentlemen Prefer Blondes" and "Some Like it Hot", not so much "The Misfits" or "Don't Bother To Knock", never mind the Monroe of her private, introspective life.
Thus the caricature of an actress who actually sounded nothing like her comedic babydoll voice, who really did read Stanislavsky, and who was probably more inquisitive and cultured than many aspiring starlets today is reduced in theory to a computer catalogue of expressions. She'll never create anything new as she well might have past the age of 36 from a new, original script. But we're supposed to stand back, watch and admire her impersonators, to go along with the pretend Marilyn.
You might be able to build a version of her face, but who will supply her timing, her charm, her thought? Does any person on earth really have the nerve to say "oh, sure--I can"? I'd like to meet that person.
In any case, I'm sure the idea of who will actually give a performance tweaking the map of Marilyn's face will fall to a group, not to another actor.

You see my point: what made Bogart Bogart or Marilyn Marilyn was something that cannot be recreated in a new form that has any authority. They're both dead, and they took their quick and ever-changing minds with them when they went. They've given their last performances and to suggest so blithely that any actor is reduced to the look of their face is beyond insulting, a totally empty bit of trumpeting and salesmanship.

And what about an actor like Gregory Peck, in perhaps his greatest performance as Atticus Finch in "To Kill A Mockingbird"? Think about that one: Peck barely moves a discernable muscle in his face; he's a model of restraint, of inner thought, of passing shadows of concern, of love, of frustration. A farther cry from the ludicrously crude live action funny faces that illustrate the NY Times article could not be imagined...so, does that mean that this "revolutionary" software will be limited to the worst kind of bad acting? Is the camera's lingering examination of Garbo's face in the final shot of "Queen Christina" dull because she isn't squinting, gaping or grinning?

So much for making SAG members start sweating. Next post, I'll give a couple of thoughts on why it really ignored not just animators, but the whole concept of what animating is--as I believe it to be, anyway.

You're right on with regard to resurecting dead actors, but I think the real threat/promise of this technology is to 3d animation and CGI. The clips accompanied by the article clearly showed a superior level of expression than most computer animated films have now. Style is one thing, but films like Shrek and other 3d fare just looked primitive to me, and not in a good Gauguin sorta way. I think a lot of people are turned off by the stilted and increasingly similiar 'performances' rendered these days and this technology does seem to offer much more livley and interesting possibilities. The article also mentioned a potential boon to actors: the lack of motion-capture equipment or similar gagdetry should allow more experssive and energetic (and subtle) performances. After all, as you've pointed out, real actors (living ones I mean) have incredible resources of charm, wit, and sophisitcation to draw on (in addition to sheer acting ability) that needs to be brought across. Motion-capture, roto-scoping and other techniques generally obliterate these nuances. If anything this technology should allow fairly extraordinary possibilites for actors to expand their skill into new, very expressive area of animation. The choices available to users of this (relativley cheap) technology are not limited to resurrection or simulation alone. Just imagine all of the potential mixing and mashing of performance, animation, and live shooting that can occure now.

CGI works great if people want to see department store mannequins moving like robots under layers of cutting-edge shading. The icing is credible but the cake isn't there. Lee Strasberg wouldn't be proud.

As the saying goes, "the proof of the pudding is in the eating." I'm fairly amazed at the scribbler's comments above, repeating the idea that this "new" technology offers "extraordinary possibilities." Did you look at the illustration? The CG expression Jenny posted from the article could be recreated by a mediocre animator literally in a few seconds, using maybe 3 or 4 of the scores of controls a decent CG rig provides. And in the same brief period of time, a much better expression could have been created.

Looking at that actor's photo and the side-by-side CG image reminds me of why porcelain dolls with roll-up eyes are so creepy -- the eyes are moving while nothing else is. Is it possible that the complete lack of any moving facial mass (like the forehead, for heaven's sake! Or the cheeks and nose and nasolabial fold?), and the complete lack of asymmetry in the CG model (all of which are abundantly present and obvious in the human actor's photo) might be good for games animation of zombies, but not even in the ballpark of feature aniamtion?

But as you say, Jenny, these articles resurface every couple of years, with only the names changed.

Ah, the Uncanny Valley. What fools these mortals be.

I happen to work for a company that uses the Image Metrics system and, really, deep down it IS all about getting volume of animation out the door but quality is a whole other issue.

When something appears to be as automatic at this, you are still limited in quality by the rig that the animation is transferred onto and the way the mesh/model was built to receive this type of animation. All the best capture in the world is n't worth a damn if you only have 18 bones deforming the face, which brings me to my next point.

My biggest gripe with facial motion capture, or any derivative thereof, is that it JUST CAPTURES THE SURFACE OF THE SKIN! There is a whole world of movement underneath the face that reflective markers translating on this dynamic surface will never be able to do the real thing justice.

I have also been known to rant about how programmers have basically dictated to artists for years now that bones are perfectly straight and 90 degree angles from each other because the "math is easier" - even if hundreds of years of anatomy study tell us otherwise.

When I was working on my motion capture demo reel, I did some keyframe animated animation using the rig from Jason Osipa's excellent "Stop Staring" book and was amazed at how much better the results looked when compared to something that was automated - either in a game engine or using motion capture (like in Polar Express).

Again, it's all about the rig it's ability to leverage the talent behind it to make it believable. To make it alive. This is where technology has the biggest challenge when it comes to "automation" and inevitably, it's the artist that steps in and gives it life.

i agree, jen. the first thing i thought when i read that NY article was, "why do we WANT o re-create dead actors?" what's the point? but more importantly as you pointed out, a piece of software driven by even the best of today's actors would not be able to generate a performance of a dead actor with NEW material.