Animated acting-the CG version; Part 2 of a reaction to the Next Big Thing Myth

Turning to the inside of the article, there's some small dose of artistic reality(and taste)from director Taylor Hackford, who points out the same huge caveat about "recreating" actors digitally:
"If you want Ethel Barrymore to give you the incredible, heartfelt performance, that comes from the soul of the actor." Then he adds, "It's not something you can get by animation"[italics mine]

Well, obviously I can't agree with that last bit--shades of that LaSalle guy in the San Francisco paper. Moving on:

Later on the producer and director of the upcoming "Foodfight" "which will be the first full-length movie to use Image Metrics technology", according to the article, says this: [in a CGI film] every time someone would say something, or do something, banks of people[those would presumably be animators] would have to figure out how the lips move, how the eyes move--and it's not even that good".

Last week I stood behind a fellow story artist and animator who's currently moved back to the animation end of the films we work on. I watched his scene, in which he's responsible for all the action and acting in the frame, with fascination. The shot was brief with but a small amount of dialogue, but the experience that he'd acquired as a 2D animator of some years' experience was obvious. The characters were alive, and their movement gave me a thrill to see even without the final surfacing and color that put such a high sheen on CG figures. The timing was subtle, weighted, well-judged, natural...yet the speakers weren't human. But their believability even in shades of grey was undeniable.

I love the magic of animation. I particularly love doing story, but there is without doubt a yearning most of us have to see characters move for the first time, to be alive in the most basic state--that allure of the rough pencil test of flipping poses on 8s sans breakdowns, when you can still clearly see in a mass of lines a personality emerge. 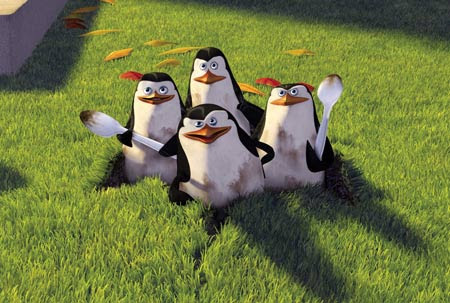 I'm no snob about 2D versus CG or vice-versa; I probably prefer the look of the pencil, but when I see animation like my friend's it's obvious that it's just a means to an end.
And speaking of efficacy of means and ends, another animation director, one whose medium is computer games like Grand Theft Auto and who's used the touted software the article advertises for two years, admits that "There's no taking away the fact that a team of animators can sit and make some very convincing animation if they want to[gee, thanks], but I challenge anyone to do the volumes that I need in the time that I need, at this level of quality, and to capture the nuance of the voice actor".

Actually, I think I can suggest quite a few people who could do just that--although that director's main interest as a games person is as he says volume on a tight deadline.

So maybe it's apples and oranges here, because what my end of the business concerns itself with is that old saw about "Quality is #1". Period.

Basically, a studio or crew has to be on the same page. Is it going to be all about speed and cheapness, relatively speaking? Because it's a fact that an awful lot of excuses can be made to justify "new" software as the best when what it really is is what was sold to you as the best way to lower your expenses while maximizing your footage.
I know of some miracle workers--animators--who manage to do amazing feats of acting in record time when the crunch comes, as it always does...their secret? Not the software. It's the knowledge of a lifetime between their ears. It's their taste, their acting chops, their own interpretation of the timing of the movement and the tenor of the voice actor. And it's unique to them, no matter how mathematic the tools are.

They are irreplaceable, and there's no machine or program that will instill the soul into their work without them at the controls.

The only people who say these ridiculous comments are those who aren't doing the calibur of work that's being done in the top three animation studios.

I don't believe in bringing old stars back to life, they're already immortalized and wonderful right where they are, in the past. I only believe in making new ones. That's what these top three studios are doing, and some small ones as well.

The computer will never take the place of the artist behind it, and needless to say all the great 2D work was never drawn by the pencils themselves. The great scenes and films will come CG or 2D, and they will all be lead by great artists.

Animation artists are truly some of the most versitle artists in the world who have to create life from nothing. They have to where many hats creating scenes that will capture to audience and take them to places they've never been before.

Western society tends to value the art and seldom the artist. The net result of placing MBAs at the helm.

People like that scare me..being an animation student and all... I love this artform so much and it really ticks me when it gets undermined like that.

But then again, what do they know? :> I ain't letting no computer beat me!

hey love your page, I work for image metrics, my first job out of school, i have a long way to go before i can call my self a real animator,
I have can not believe how much fuss and attention this company has attracted from that article.
There is a lot i would like to say and discuss but i wont, i have read a lot of responses, and i feel that people are a little misunderstood, and overeacting, there are two worlds, the artist world and the buisness world.There are two kinds of people in this industry, the artists and the suits,You have been in the industry a lot longer then me so i am sure that you know who controls the industy so i think your battle is with the people who want to use us not image metrics.
I also find it wrong to belittle anyones work whether if you like or not, if it is good or bad, unless you know what went on in that production. I understand and agree with some of your comments, beacuse i am an artist but you are taking it to anohter level.
Image metrics did not write the article A Journalist did.

Animator Jay , there i no reason to be scared, Mo-cap, dodo-cap or any other cap i s ever going to get rid artists. The mind is the creator not a computer.

For something to exsist there has to be something or someone who wants
it to exsist.
i love your sketches