Where the girls and boys will be... 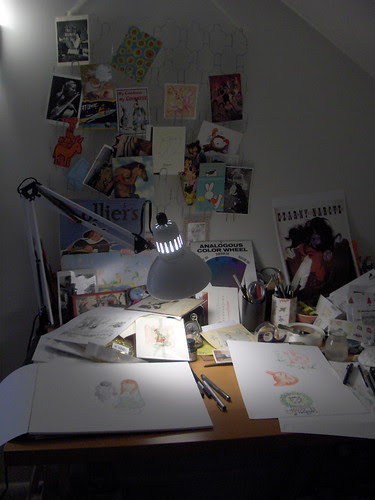 Busy times at work and away.

Tonight my union, the Animation Guild, is hosting a panel discussion inspired by a study noting surprising female/male ratios in children's programming; like the study(commissioned by "See Jane", a think tank begun by Geena Davis, who'll be part of the panel)the evening is called "Where The Girls Aren't". Yours truly is on the panel too, along with "Lilo & Stitch" co-writer and director Dean De Blois, Brenda Chapman (now up at Pixar, whose reputation over the last 19 years in the business is well-known, not least her distinction as the first director of a feature animated film in the US), and producer Fred Seibert of his eponymous Frederator/Oh Yeah! Cartoons. Jill Culton, former Pixar story artist and present feature director with her film "Open Season" in theatres now, is also on board to come.

I was asked by union president Kevin Koch to participate mainly on the basis of my having weighed in on this topic on the union's blog several months ago. Announcing the event tonight Kevin posted a blurb about the panel and again there's some comments that indicate this is a hot-button issue for some. You can read it here.

Well, it should be interesting. Personally, I can only speak for myself--as an artist, as a filmgoer, and as a former little girl who grew up with whatever was on TV and in theatres when I was a kid. Based on those factors I have my own beliefs and ideas like most people do, but I've never thought of myself as political on the subject, with one of those dreaded agendas. What I do believe is always important(when done well, in a spirit of exploration and contemplation) is plain old talk, which is true for any subject that seldom gets discussed openly. The forum tonight won't just deal with the parameters of the "See Jane" study, it'll also address the fact that our animation industry has so few women, even now, in the 21st century, who're employed in our business. Why is that? I've been asked that question since the first day of my very first job--and before, in school. I have no big answer, only guesses.
But the question itself is always a jolt to me, because I really never think of myself as apart from the guys at my work. In drawing characters and story; I'm first and foremost a storyteller--and I'm all the characters, male, female, and in between. I 'm pretty certain that this is also how all my colleagues who happen to be male think, too. But while we are what we are--men, women--for however much that counts, the thing is that the drawing is a creature of its own--who can tell the sex of the person who drew it? No one.

I don't believe in quotas. I am interested in good stories, real characters...but in a milieu that's overwhelmingly male the status quo possibly may have an influence on what we do and how we see our stories and characters, and that's something that at the least(and maybe at the most, too)we should make ourselves more aware of. Just conscious of. --Not self conscious.

The imaginations of children are very forgiving, all-embracing, and usually more wild and creative and gender-bending than our adult version. And I'd throw into the mix the fact that not every thing we, animation folk, do is for children, although the reality is that a large part of our audience(for feature films made at large studios, with big budgets)will consist of families.
The subject is so multi-faceted that I really can't see what more we can do at a panel in a couple of hours other than toss around ideas and observations, but if that's all we do it'll still be an interesting and enlightening evening, I think.

That sounds like a great panel! Too bad I'm on the other coast. Hope it went well.