The second post in almost as many days that's really a redirection to the Animation Guild's blog, but this one's also on a subject that's always been of particular interest to me. 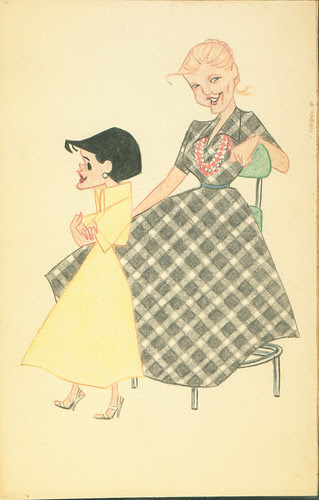 Wonderful caricatures of animation artists Tamargo and Zwicker by John Sparey-see the original, larger version at its home base, the TAG blog, from which this illustration is gratefully borrowed

Please go and give it a read. Honestly, I'm ashamed that I've never heard of either of these women before; if you'd asked me if there were any females in the animation department apart from ink and paint or layout, I'd have said I knew of only one off the top of my head, Ruth Kissane. Obviously there were at least several more and their stories have to be interesting by any measure simply because their presence in animation--and at the "best" studio, Disney's--was so rare.

When I was a teenager I wrote to Disney archives maven David Smith to ask him about Retta Scott, whose picture had appeared in Christopher Finch's "Art Of Walt Disney" and whose credit as animator on "Bambi" fascinated me. I asked Dave to tell me what her credits were, and if she was singular at Disney's as a woman in animation--the drawing, as apart from the inking end(keep in mind that virtually all of the so-called "ink and paint girls" were usually highly trained artists, having gone to the same schools the elite animators had).

Dave's answer was terse and offered only that yes, Retta Scott was "unique" as a female animator or assistant at Disney's until the 1970s; he mentioned nothing about such people as Bea Tamargo, Liz Zwicker or Ruth Kissane. I think this was likely due to their names not listed in on screen credits as "animators", but I really had been curious to know if women did any drawing jobs that involved animating...obviously, there were and they did. What a shame they weren't on the historical radar of the archives.

Frankly, the individual drawings and personal art I'd love to see is that of these girl veterans of Disney's; were they as strong artistically as many of the guys whose work we collect, and who had more important positions? Virtually impossible to know, unless someone somewhere saved grandma's stuff, which I certainly hope is the case. It seems certain that anyone in any capacity at Disney's had to be practically overqualified to get a job offer, especially after the war.

Thanks for sharing this bit of info. It's always nice to hear about women or minorities in the early days of animation.

Although she never animated at the Disney studio, Tissa David would have to be considered one of the top women animators .You may be interested to see that I've posted a short appreciation of Tissa's work , with links to a biography, and some of her drawings on my blog:

Your cintiq drawing of ariel has to be one of the most endearing drawing I've seen in a long time. Kudos on your blog, you've got some gorgeous stuff.

And thanks to you and all you veterans for sharing all the old disney stuff with us rookies; it's a huge help.

This post strikes a chord with me, being a woman member of what I see as a 'bridging' generation in the animation biz. My first animation job began in 1980 at Nelvana in Toronto as a layout artist on Rock And Rule. Julie Eberley was a brilliant young BG painter at the studio, other women doing excellent work included ever talented animators Anne Marie Bardwell, Wendy Purdue, and Cynthia Ward. Dale Cox was our persevering den-mother production co-ordinator and Lenora Hume was head of camera dept. Boy are there plenty of 'women in animation' stories in that there naked city!

I don't know much about the earlier women in the biz. that you are covering, and of course our experience in Canada in the somewhat freeform 80's was in many ways nothing like the life of those gals at Disney. Can't really compare these experiences- I'm sure that your own career experiences are different yet again. Did I use the word experience enough!!? :)

I used to not like to even THINK of the idea of a woman's 'take' or experience in the animation business, I suspect because I pushed pretty hard as a director and never would admit to myself or anyone else that being female was any kind of a handycap. Hey I'd use being a woman as an advantage any chance I got. It's easier to admit to exsistence of the gap between male and female artists now, wiser in some ways as i am and still striving to gain 'acceptance' (for what I'm sometimes not even sure...!)

I'd love to see a picture of Liz Case Zwicker as a Mother of the Beat Generation. Now THAT would be something!

Thanks for making these connections, Jenny! And thanks too for your recent kind note on our blog.

Hi, Jenny - since I was really late at posting my comment on the Guild's blog, and I guess you'd be interested in this little piece of information as it adds a few names to the list, here is, redundantly, a copy of that comment:

Though it is near impossible to tell which function the other at least 17 ladies (who were not in the official Stenography dept.) on the 1st floor of the animation building had (Inbetweener? Secretary? Stenographer?), the above mentioned ladies likely all were inbetweeners or trainees, since they shared the room with Bea Tamargo and Tex Henson, who also inbetweened at this time, I believe.