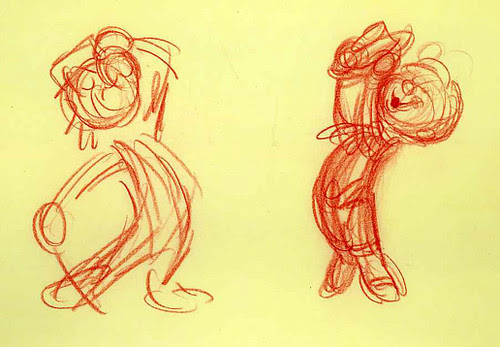 One of a series of extremes posed out by Fred Moore for an unproduced sequel to "Saludos Amigos" set in Cuba; this drawing hasn't been published before here. Courtesy of James Walker , from his collection. Fred's genius is often never more evident than in the roughest of his drawings.

Back in the late 70s and early 80s Steve Hulett had a dream job at Walt Disney Productions(as it was called then): he was assigned to interview many of the old-timers either on the lot or recently retired yet still connected to the studio. He's posted many of these--all worth reading--over on the The Animation Guild's union blog. Here's a sampling of a lengthy interview Steve did with Ward Kimball, which he was lucky enough to be able to tape--when I interviewed Ward in 1981 he insisted I not turn on my tape recorder, for two reasons: he'd been "burned" by a verbatim but cringeworthy (also exceedingly touching and honest) interview he'd done which had made print, and also--this is my opinion--he wasn't completely sure of a teenager who he'd never met before(me) rather than a Disney employee whose dad had worked for the studio(Steve)! Well, I was fortunate he talked to me at all--I still can't get over it. But I'm digressing again.

So, Steve Hulett posted an exchange with Ward about Fred Moore.
You can read it here.
It's almost exactly what he told me, complete with the part about finishing Fred's work for him. I did, by the way, sit in my car outside Ward's home for at least an hour furiously scrawling down all the quotes and stories I could before they left my memory, so I did have that. 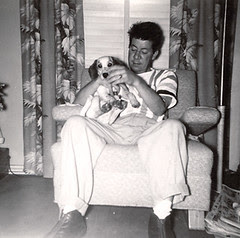 Fred Moore in the 40s; from James Walker

I'll say that while I believe that all the men I interviewed were honest--Art Babbitt, Ken O'Brien, Ollie Johnston, Larry Clemmons, Carl Urbano, and Ward--obviously each one was not only digging back into memories that were decades old, but were talking about a colleague, once a superstar at the greatest studio in the world, who'd fallen from favor and died barely 40 years old...so there's bound to be some mixed feelings there. Ward I felt especially, as the man I spoke with closest at one time to Fred, struggled with emotions about his old buddy. As a matter of fact, in my conversations he showed a good amount of plain anger at Fred, and made it clear he had cared a lot about him, and felt frustrated at how little he could do for him. He'd use a fair amount of sarcasm in expressing this, but even me, a jejune teen, picked that up. I think those are things to keep in mind when reading some of Kimball's remarks in Steve's interview excerpts.

Thanks for this new Fred Moore drawing! Can't get enough of those.

Jenny. Thanks for the link, much appreciated.

I've got one more long post from Ward on "Pinocchio," up shortly. His ruminations on working at the Mouse House remain fairly vivid to me, even twenty-eight years later.

Thanks for all of this wonderful information on Fred Moore. I've always wondered why he wasn't in the "Nine Old Men" lineup.

I always assumed he moved on to another studio or field.

Your artwork is great, very inspiring.

Jenny, thank you so much for exposing me to Fred Moore. I'd never heard of him until I started reading your blog. Do you know of anywhere else, any books in print or anything similar, that would have more of his stuff? I've gobbled up everything you've posted here, which is fantastic, but I was wondering if you could point me in the direction of any published material that might be floating about out there. Thanks a bunch and keep doing your thing!