The first still is from a Fox film, circa 1929-30; I 'm not 100% who any of the gentlemen are in the picture, but I do recognize Felix the Cat on the drawing board. Is the guy we see drawing here Brad Bird's favorite actor, El Brendel? Is the fedora-wearer the third husband of Mary Pickford, Buddy Rogers?
Is this a scene still, or is this a semi-candid taken to commemorate the visit of the producer of the Felix cartoons, or is this a newspaper artist of same? Someone out there knows, I'm sure. I love as always the presentation of "how cartoonists[and it might as well be animators]do it": on a life drawing board with newsprint, using a piece of charcoal or a crayon--complete with background!
Also note the amazing, life-sized deco statue our friend on the left is resting his smoking arm on.

As for the other, of course it's Ken Anderson, surrounded by "101 Dalmations" art, apparently making a presentation to this woman in a formal kimono(whether she's Japanese or perhaps Korean I don't know). What a great drawing Ken's made--I can't read the caption, unfortunately...and I wonder why Ken has a slightly tense look on his face. Who knows? Wasn't he a bit of a famous hothead at the studio, along with Peet and Kahl? Be sure and correct me if I'm wrong! 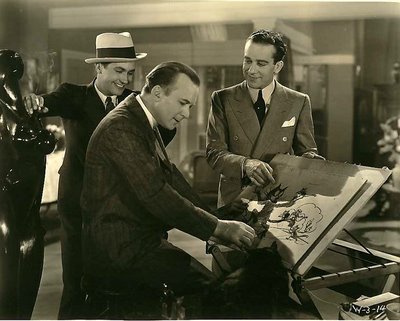 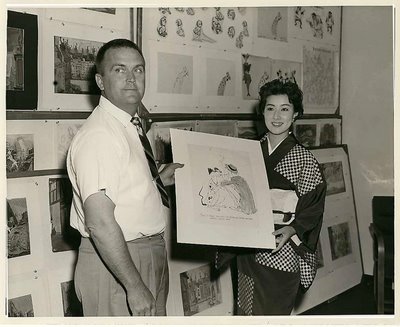 Clcik the photos to get a better, larger view

Correction and addendum:: Jerry Beck writes in the comments that the film shown is "The Golden Calf":, a "lost" musical feature from 1930, and so this is indeed a scene still, not a candid. Actors Richard Keene and Jack Mulhall flank El Brendel(famous for playing mostly "comic swede" parts). I originally wrote that the cartoon cat was "Krazy" cat, when it's obviously "Felix" on the drawing board...I knew that, but in one of those weird moments where you know one thing and write/say another, I wrote the wrong character down as an ID. Many thanks to Jerry for sharing his expertise!

I've been in Ken's office. Seeing that photo makes it seems like only yesterday. Having lived in both Korea and Japan, I'd say the young woman is Japanese.

Hothead? Let's just say Ken was passionate. I've seen him jump on furniture on occasion. I miss that kind of passion in animation today.

Look at those big blue eyes. Makes him look like a sweetheart, right? He could be scary some days, but I still love the guy.

Thanks Jenny. These are fantastic.

And you are sooo lucky that you didn't have to work with or for him.

That first still is from the uber-rare 1930 Fox musical THE GOLDEN CALF. It's considered a lost film. That's Jack Mulhall on the right of El Brendel and the guy in the hat is Richard Keene. The film revolves around the romance of a commercial artist. Brendel being the comedy relief is obviously a cartoonist. That cat looks more like Felix than Krazy Kat to me. Great photo!

And thanks for the info on the title! A lost film? Damn! Here's one for UCLA to dig up, then...I hope it turns up.

Btw, you'll appreciate this: the cryptic El Brendel reference vis a vis Brad Bird is this: One day a bunch of us were standing around and someone was doing an accent(if I thought long & hard I might be able to remember what on earth we were talking about). I remarked that it sounded "more like El Brendel"--Brendel being a bit of a running joke between me and Mike Hawks. Brad turned and stared at me like he'd seen a ghost. "El Brendel! How do you know who he is? I've seen an El Brendel film!" he exclaimed. It turned out he'd been to the same screening of "The Big Trail" at the Academy that I had years earlier(you were probably there too). One of life's great moments. Goes to show what a serious cineaste Bird is, too.

As for Mulhall--I'd never have recognized him...I wonder if Mike has a lobby card on this? I'd love to see more "artist at work" scenes from it.
I have a publicity still promoting the silent "Felix" cartoons...to make up for my dumb mistake I'd better post it!

-Floyd, thanks for the great memories and ID. I'll take your word for it, but I also think you probably saw the good in everyone you worked with, to your credit. : )

-Steve--now I remember your story about working with Ken on his personal project. Oh boy!
Add to that that I'm certain I've read in Canemaker or elsewhere that Anderson could be difficult--and the (to me) icy look in this guy's eyes, and whew! So I guess I am lucky...although I love his work and well, maybe I would have killed to be made miserable by this artist. Or perhaps not. Thank goodness I just get to revel in the drawings he did.

-r.dress, thanks for the nice comments!