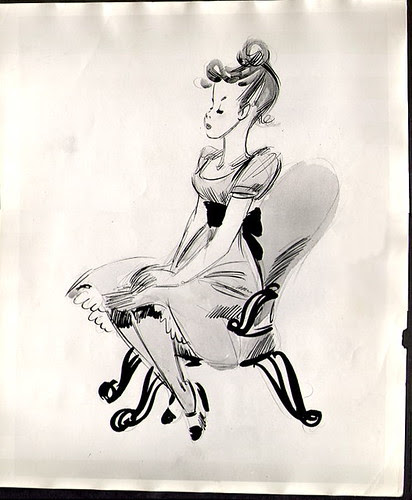 Here's an interesting oddity kindly referred to me by a prominent animator whose name you'd all know(I'm not sure if he wants credit for this; I'll be happy to do so if he doesn't mind): a collection of photographs, or "stills" on Ebay, all the usual semi-rough, gorgeous Fred Moore girls, but for some unknown reason these were officially passed around the Disney studio, courtesy of Joe Grant's Model Department. Exactly why it was deemed necessary for artists to have what are basically Fred's personal gift pinups as desk reference is a mystery. Although there were projects such as the aforementioned "All The Cats Join In" sequence that were designed by Fred, those had their own, specifically corresponding model sheets; these seem like nothing more than eye candy...perhaps there was some sudden edict to try and attain some spirit or style from these girls' poses? 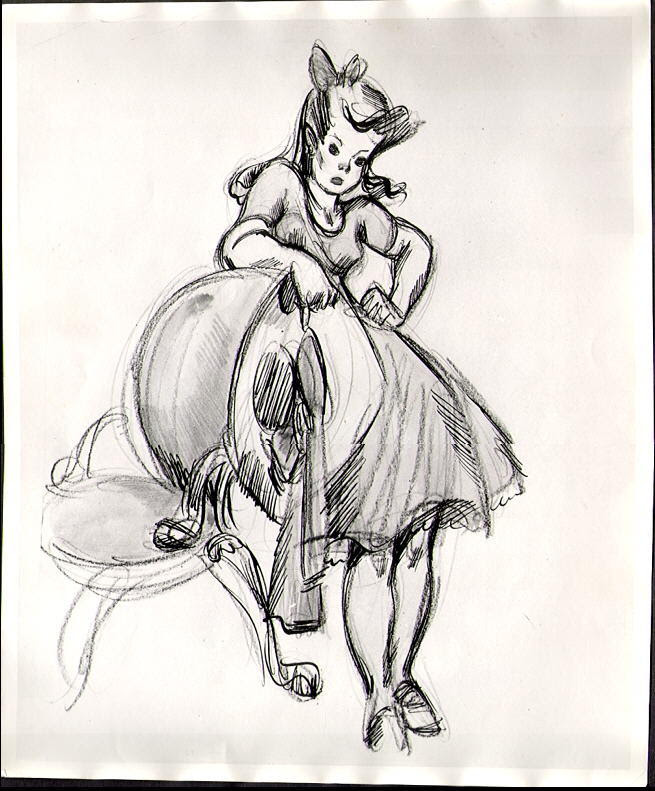 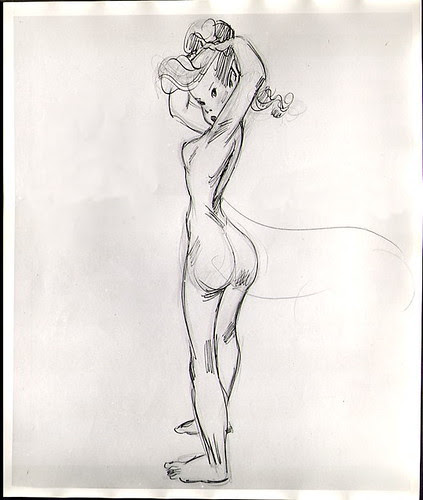 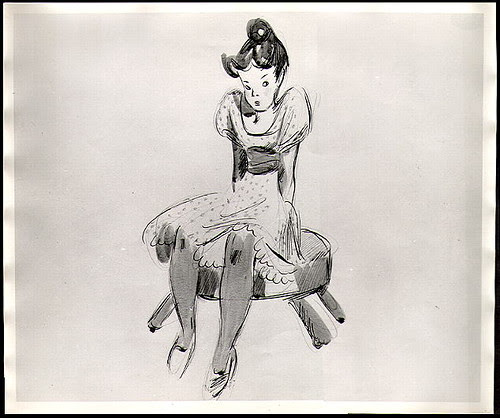 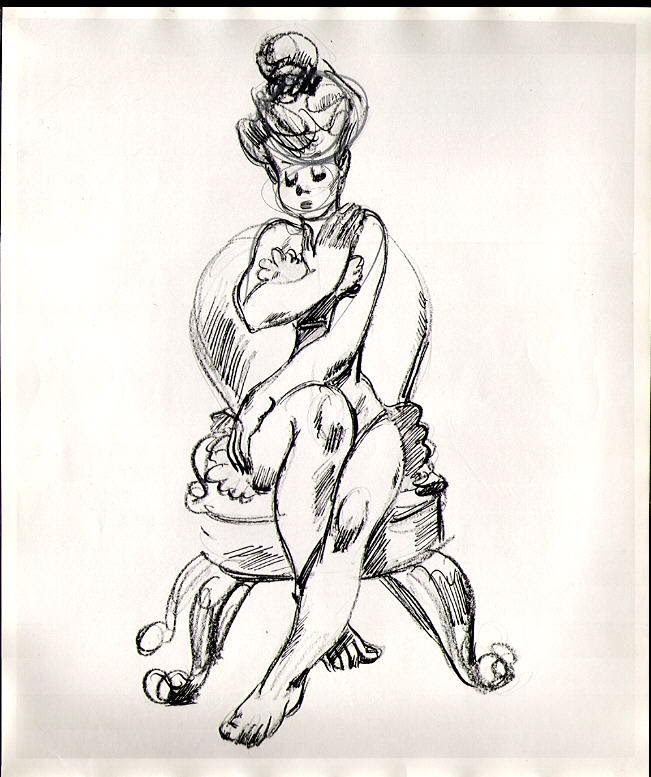 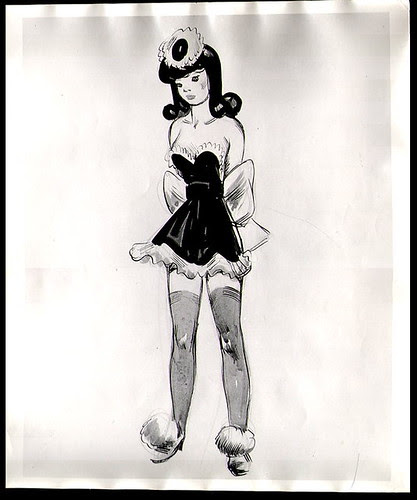 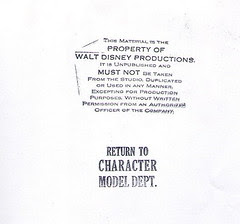 The reverse of all of these photographs are stamped in this way; what were these used for? Why were they done?


Unfortunately, this Ebay seller decided to use material from my blog as part of his selling page, including a few screen caps I made and a photo from the collection of James Walker that's one of my favorites, of Fred in a crib at a party(he also quotes liberally--without any attribution--the offical "Disney Legends" web page devoted to Moore, as well as linking to yet another page containing a completely fictional account of Fred Moore's accidental death).

James Walker was fully aware when he allowed me to post artwork from his private collection on Blackwing Diaries that these would be easily downloadable for anyone, anywhere--and that was fine by him. He has the generosity of the pure afficionado, and luckily for the rest of us loves to share things that have taken him decades and thousands of dollars to acquire. I salute him for that. I know that I would be snagging the drawings and photos of Fred Moore and others myself, were they on other blogs--but--and this is crucial--for my private use, not to resell or to use to sell other stuff. There's something slightly unsettling about seeing pictures that have turned up without any credit in someone's sales pitch without even an email asking permission. This happens all the time(I had an entire essay I'd written and published about Ernie Kovacs plagiarized by not one but two different people, one a radio show host in Seattle, the other a Columbia "communications" student; both presented my original work and accompanying photographs word for word as their own on their websites with their names attached), but it's a huge breach of internet etiquette to do that--however laughable the concept may seem. The seller may be entirely innocent of any of this, but even if he found the photograph through googling Fred Moore he'd easily notice which page it came from--especially as he used other images from my site. I'd like to write it off and forget it as a well-intentioned attempt to give these photos some background.

I realize too that where the borrowed "Make Mine Music" screen caps are concerned, I was posting images that I emphatically don't own, but I did go to some little bother making them, and it's just a no-no to swipe such things from other people without first asking if you can repost them. Not included in this area are direct links to the source; many people have been kind enough to quote from and link to posts on Blackwing Diaries, sometimes including an image from my site--and I'm flattered and happy that they do it. I do the same thing in regards to others' sites, as you've seen.

But this Ebay stuff is different and inconsequential as it really is, it's not cool. Ebay in fact has a standing policy of not allowing sellers to "borrow" or use others' photos in their listings, and often shuts down auctions for that infraction.

And as a final bit of editorializing, in my opinion this seller is asking much too much money for what are after all, so-so condition copies of photographs--photos that were definitely printed more than once and passed around freely within the studio, and perhaps externally as well. There's an old saying about rare items that "they're worth whatever you want to pay for them", but $300 per photo(for the "buy it now" option)? I'd put the "real" value at somewhere like 40-75, tops. But again--if someone wants it that badly, and it makes them happy to have a photographed drawing that's indeed about 60 years old, there's nothing wrong with that. I suspect there are more of these scattered around the US, though.

In any case, enjoy more examples of the delicious line work of Fred Moore! 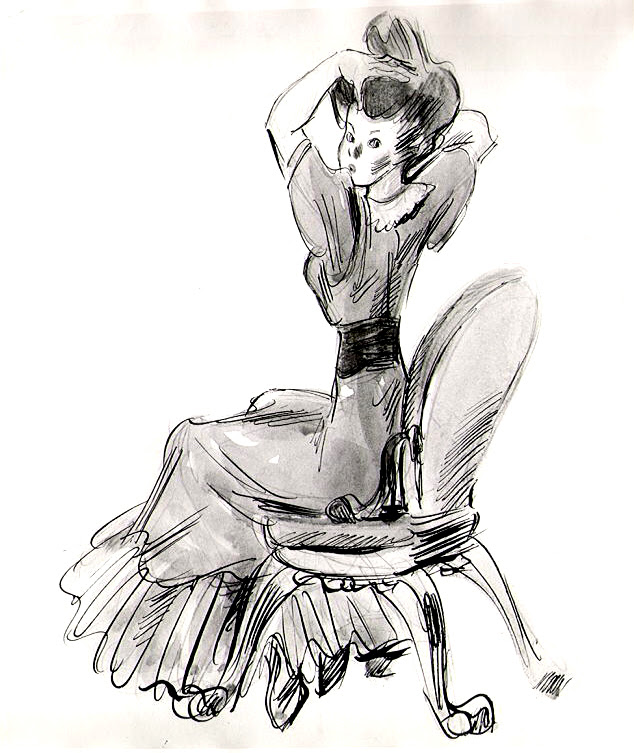 That's one reason I'm so interested in image posting that runs through scripts that disguise its location. I *hate* having to put copyright information across images but sometimes that's all you can do. (I am not, I should say, particularly strong in programming.)

Jenny, the eBayer is completely in the wrong and you should let them know about this. Kindly write to them and tell them that they are using your images, that they should've asked first, and to please take them down. They do NOT have permission. The photos are not meant for the public, even if they are up on the web. Internet postings do NOT equal public use. They are YOUR scans of photos, therefore are under your permissions and rights. Talk to this seller and and hopefully they'll comply if they have any once of dignity.

Jenny, some of what you descirbe (like the Kovacs article swipes) aren't just breaches of nettiquette, but copyright violations and patently illegal (as I'm sure you know). I hope you spanked them for it.

I'm baffled by this. If the seller is using your images to sell the prints does it not raise questions as to their authenticity? How hard is it to photograph a sketch yourself if you have it in your posession?

"Sorry officer, my camera was broken."

Jenny Lerew said...
This comment has been removed by a blog administrator.
7/25/2006

antikewl, the guy has a box-enclosed paragraph: "about Fred Moore" embedded in his Ebay auction pages of these photos I've shown and posted here. Within the biographical info he included a photograph of Fred that came from my page and that is in the collection of James Walker, as well as other images that are taken from other websites. He isn't auctioning or selling my photos, and I'm sure that the things he is selling he took his own pictures of.
Sorry, I can see how my description is confusing. What's ironic, though, is that he's actually gone to the trouble of right-click disabling HIS bio page, which includes images HE grabbed without permission from my site! Figures!

Kevin: in the case of the Kovacs page(my page is down now, but it was still up at the time), I emailed both offenders, telling them that I didn't appreciate having my writing reposted without my permission or my byline and the inference that they'd written the words themselves. Of course I didn't hear back from either of them.
Ward, I don't know if I want to deal with this guy at all...I probably should, just because once another person presents images as emanating from them originally, later on it might look as if I took them from him-who knows! I just don't think they should be used to sell other items, especially without permission. He didn't have to do this elaborate selling page, anyway--the "extra" photos and links; he clearly wants to generate as much dollar action as possible.

In the meanwhile--aren't they great drawings? : )

yeah they're great drawings, fred moore got a raw deal. Nobodys passing around Frank Thomas's drawings of girls for inspiration. Couldn't keep up with the drawing skill level my ass, these remind me of matisse.

There should definately be a solid effort to pass on the real story about the circumstances of his death. Anyway, thanks, i'ma add you to my links jenny.

Thanks for the clarifcation! Oh yes, I definitely won't object to you posting more Moore! :)

If anything, you can have James Walker write to the guy himself. After all, they are his photos.

It does get into sticky-wicket territory here, but bottom line is that they are definitely not the eBayer's photos and that he should not have used them. If he wanted to use them so badly, common sense should've told him that he should contact you and/or James regarding the use of the photos.

Sorry, but this just gets me all steamed! I hate image-jacking!

Well, Ward, I emailed the guy and presented the issue to him just as you suggest, without any drama. 5'll get you 10 he tells me to naff off! We'll see. He's got a pretty good amount of negative feedbacks, so something tells me he's not going to feel like playing fair.

Not a huge deal in the grand scheme, but yes, these sorts of things get me steamed too. If anything, at least I broached the fact of it here, publicly, so that in the future(assuming this blog is up), there'll be a place where people can trace the provenance of these things, and read that they are from James' collection. He hasn't asked for a thing and has been so generous, it's the least I can do.

It looks like a lot of these drawings were used as reference for the centaur women in Fantasia. That probably explains the two lines off the back of the nude sketch - they're where the horse part would go. :) It might be interesting to do a shot by shot comparison between these sketches and the scene in Fantasia.