Like almost every kid--and especially every youngest child, we inheritors of hand me down toys and books--I grew up with the Beginner Books that Ted Geisel edited for Random House.
Ted also wrote many of the series under his most frequent pen name, Dr. Seuss. But although I loved Seuss, my absolute favorite author/illustrator was P.D. Eastman. "Are You My Mother?", "Go Dog Go!", "The Best Nest" and "Sam and the Firefly" among many others made a huge impression on me.

Like Bill Peet, Seuss, and a few others of their generation, Eastman had cut-to-the-heart appeal in his simple, friendly drawings--which were also often staged to great dramatic effect. I'm sure millions of children can remember the pentultimate image from "Are You My Mother?" with the baby bird, beak agape, perched on the edge of a huge digging crane's teeth.

Several years ago I was surprised (pre-Wikipedia) to find practically nothing about him on the internet. Via an old message on a librarian's website I stumbled upon an email for Tony Eastman, one of Phil Eastman's children and an animator in his own right, and we corresponded. It was from Tony that I learned that Phil had been a story artist at Disney's and UPA; well, I shouldn't have been surprised. It seems that virtually any illustrator whose sense of charm, staging and color were exceptional had worked in animation during it's golden age. Through Tony, I was connected with a woman who had a rare item: one of Eastman's original drawings, which she'd won at a charity auction over a decade ago. She'd kept it in her kids' room and was willing to let it go, and I'm happy to say it's now on my own wall: 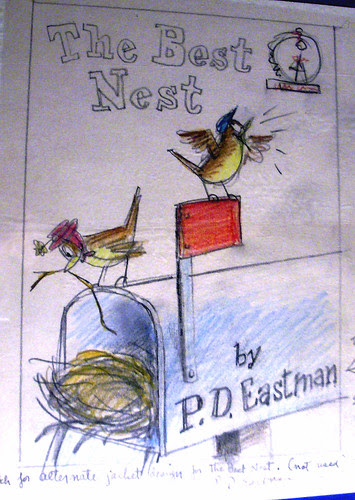 Sorry for the poor image--it's framed, and I don't want to take it apart...but it gives a good look at one of Eastman's cover mock-ups; this one was an unused alternate for "The Best Nest"(it's so described and signed by Eastman in a notation at the bottom; it's also full sized in scale). 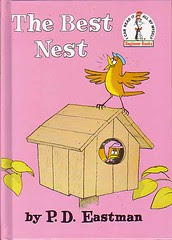 Interestingly, his first design was used--with some changes--for a later, popup version called "My Nest Is Best": 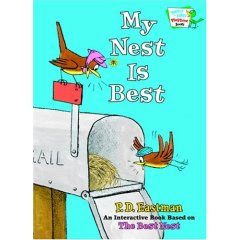 I'd be willing to bet almost all readers of this blog know Eastman, and that most of you liked his work as much as I did. It's a great example to me of the value of simplicity, and amazes me in how much he's able to suggest with very little in the way of detail. That's a story artist's dream.

That makes complete sense that Eastman worked in the animation industry back in the day. I always felt that his work seemed to have more character in the characters, more color in the colors. It's also in the way that he visualized the stories. Very animator-like.

I also grew up with his books and they were a huge influence on me. :)

That's an awesome piece you got! Way to go.

It's true, I really hit the jackpot with this one...I'd have been thrilled to get a scribble on a post it. I'd asked his son if they still had any originals/scrap/drawings of his dad's and he said yes, but not for sale-but he remembered me when this woman contacted him about her auction win, when she was ready to sell it. Talk about luck! I just wish he was still alive so I could have written him a fan letter...considering how beloved he must be by generations of kids, it's too bad there isn't more about him out there.

Thanks so much for this post! I've been looking for info on Eastman and Roy McKie -another Early Reader artist/writer, but to no avail. I assumed that most of these artists (save the Berenstains) were animator people, because Dr. Seuss (the editor of the series) worked with so many of them.

Have you found anything on McKie? The linework in his ER books is rougher than Eastman's, but he works nifty shapes into his work, and I've learned a thing or two looking at his stuff.

I talk about Phil Eastman in my new Book Drawing the Line. Eastman was an activist, Disney Striker and blacklisted by HUAC. Shamus Culhane hired him in the 50s and had to hide him from the FBI in the back of his New York Studio, where he ironically wrote commercials for the US NAVY. He met Dr Suess in the Army Signal Corps and they became friends. When most film options were closed to him because of his politics, Geisel invited him to try publishing.

I also love Eastman's books and enjoyed sharing them with my husband's granddaughter. Books like Eastman's have been a delight to generations of children, parents, and grandparents.

My mother had a gift for drawing, and my brother is an artist. I, however, can only draw stick people and such -- I teach math.