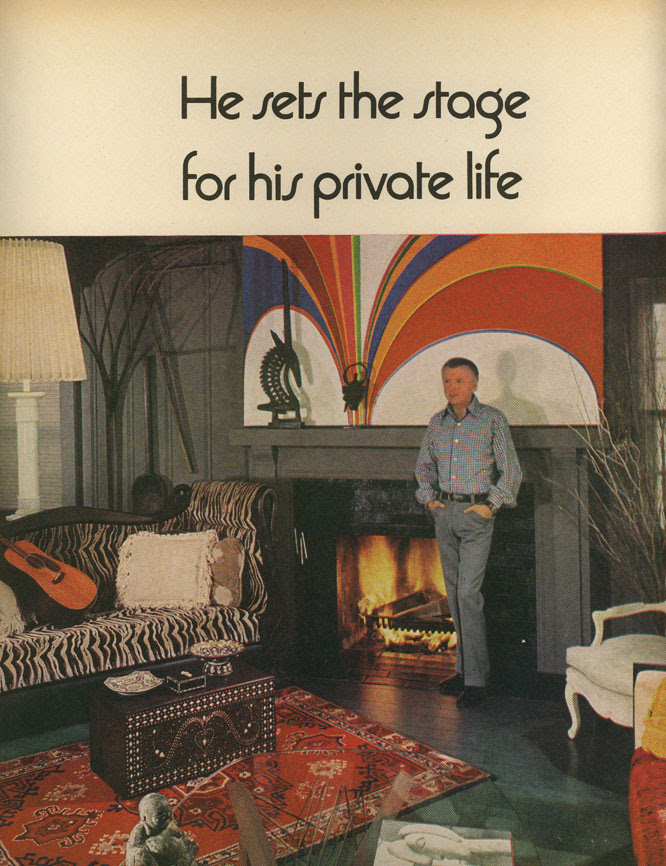 Here's a rarity: Bob Winquist shows off a little of his home and office design in 1974-and there's Bob himself, aged 49, in his then-living room. From Good Housekeeping's House Beautiful, Spring 1974.

Keep that date in mind: 1974. Bob's is the most appealing and well-designed space that's showcased in this high-end magazine by far. The other interiors featured would likely make you laugh, cry, or just cringe; the seventies were not generally an attractive time, to be charitable about it.
But Bob then as later had his own highly individual taste and loved mixing old and new in an eclectic fashion, which makes a lot of his choices timely even now. But who knows what he'd say looking at this spread in 2008? By the way, the article identifies the art hanging over the fireplace as done by his life partner Robert Hammer. When I originally got this of course I had no idea who he was. He must have been a very interesting man to be Bob's partner for 50 years.

As to that and all things Bob, this opening line of the accompanying text is so apt:

Click the lower image to see it in a larger size. 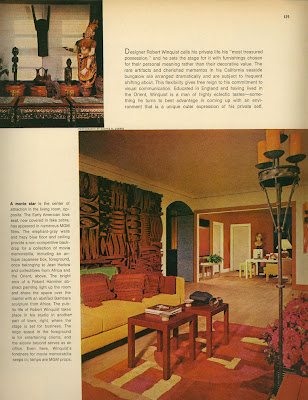 I am struck by how slim and youthful Bob looks. As it is with one's grandparents, it's hard to imagine him looking any different than he did fifteen years later. However, he ALWAYS exuded a youthful, yet wise, attitude and aura.

Why don't we all do a final assignment in tribute to Bob. The lesson is: "Bob Winquist"

Seriously--if a get-together to remember Bob is arranged it'd be pretty darned cool to do such a thing.

I immediately had thoughts of potential assignment solutions pop into my mind upon reading your comment-couldn't help it. That's Bob for you.

I appreciate your enthusiasm-Would it be possible for us to individually post images of our assignments to this site or via a link set up for this?

P.S.- Are their any updates from Joyce Snyder regarding the memorial/celebration for Bob?

This is fantastic! I truly love the photos of Bob's home, the boldness of that painting over the roaring fireplace. Wow!

Thanks for posting these images. I never met Bob myself, but have had many teachers and mentors in my life who have meant so much to me. Teachers like Bob Winquist are so treasured, and luckily for him, too, he had smart and sensitive students who could appreciate all he had to offer.

This is crazy, In the top photo, you can JUST BARELY make out a glass table with a iron rod base. Two years ago when he had decided to move from his home in Valencia, I had the AMAZING opportunity to peek into Bob's "most treasured possession" by going to the garage sale his family had at his house. There i purchased two items. One was a funny old clown gumball machine that im sure HE got from one of the MANY garage sales I would see him at almost every weekend. The other was this table. Its amazing and I was so glad to get and Now even MORE glad to know that it was part of his life for such a long time.