More on Winquist-pictures from the past 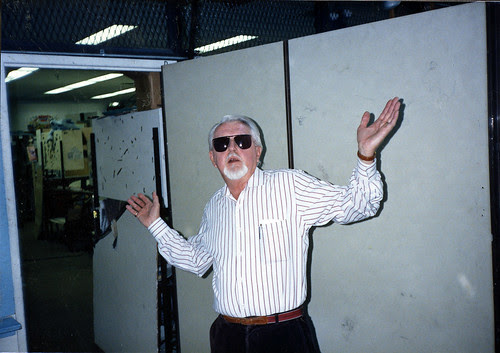 Ready for his closeup: Bob standing in the doorway of what was then our 2nd year students' room-now The Palace, in 1989

Steve Anderson, who started at Cal Arts in 1988, found these wonderful photos he'd taken. His generosity in allowing me to post them here is much appreciated. These are just priceless. 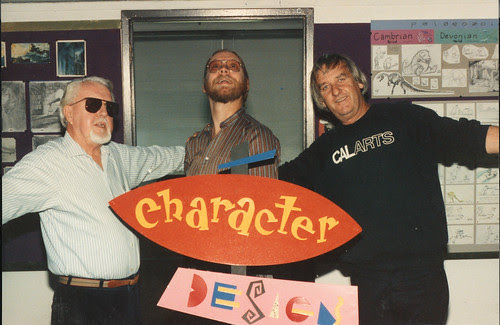 Here's Bob with his major domo/computer guru/all-around department glue Dale McBeath and Disney veteran/animation teacher Dave Michener, all snapped by Steve's camera while preparing the 1989 Producer's Show. Thank goodness he got this picture as these three were cogitating in the hallway...talk about serendipity. Bob: different day,different striped shirt. Dale: ebullient! And I can't get over how young Dave Michener looks to me...now. He was a great guy.

Wow wow wow - thanks so much for putting these up.

I remember Dave! He was at that Pagemaster Internship I went to. One thing he said that has always stuck with me - "Be as good as you can at your job and you will always have work."

Thanks for remembering Bob. He was a seminal influence on our industry. Scratch the surface of any hit anim movie/TV series and you'll find dozens of devotees. His design ethic is evident in most CN and Nick productions.
When I applied to CalArts, Jules called me "too cartoony" and sent me to Bob, that forever changed my life. I'll dig up some pics and caricatures I have for your blog.

Jim-you were lucky to be able to work with Dave-he was such a generous, laid-back kind of guy, very kind, funny, and encouraging. Good advice too.
All credit for this post is 100% due to Steve Anderson-I nearly fell off my chair when he showed these to me. Kudos to Steve!

Les sketchy-thanks! I have disturbingly little to post myself(what I do have is probably squirreled away so deep I would only find it by accident).

All the real credit goes to the people like you who've shared the impact Bob made. I love the fact that he seems to have had the same effect on everyone-can't say I'm surprised a bit.

Thank you Steve and Jenny! So funny to see Bob, Dale and Dave hamming it up. Those were such great times and so many fantastic memories.