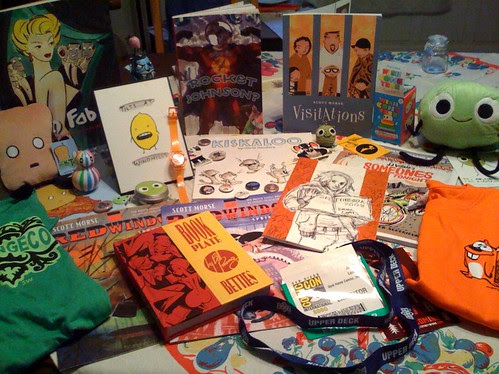 It was two years ago that I first blogged about my San Diego Comic Con experiences. I've just reread that old post. It's odd how quickly the time's passed, and how much has changed since then. I'd been writing The Blackwing Diaries for nine months in July of 2006, along the way reaquainting myself with some old friends as well as meeting new ones via comments and cross-postings. It was when the bunch of us doing story on a certain project decided to pool resources and do a single book together in time for the 07 Con. 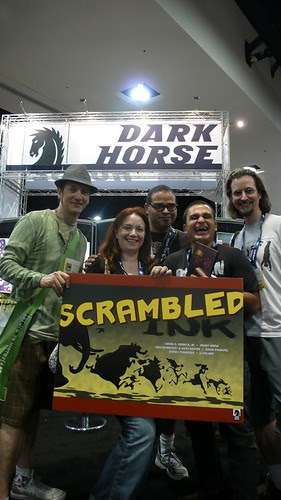 This year all of us(with the exception of Keith Baxter away in Canada, and David Derrick-on safari in Africa)came together to sign our books at the Dark Horse booth. The Con was the "official" debut of the book and the first time we'd seen it on a retail shelf(I was relieved to see that Amazon too finally has it listed for sale after eternally showing a "pre-order" listing. One thing, though: Amazon mistakenly has the book listed as paperback-that's wrong. It's only been published in hardcover).

I've never done an event like the signing thing before. Very surreal to see a little line of people with books in hand for us to draw in. Dark Horse unfortunately ran out of books to sell midway through our time slot, but we carried on signing and drawing on some cover flyers. Best of all was meeting and chatting with the people who came up to the table. 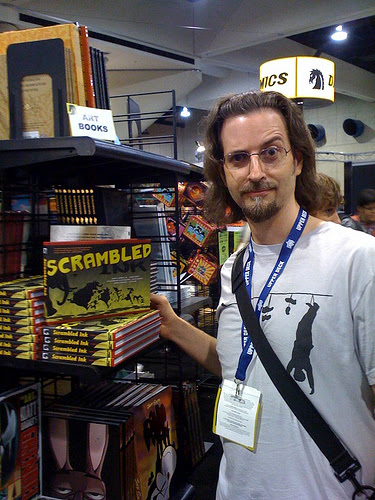 Actually, finally in print and for sale

It's easy for me to forget that anyone reads this blog--especially when I've let so much time pass without posting as I was wont to do a year ago; to have people tell me they read and enjoy it is more gratifying than I can express.
The time passed in a blip, and we had to make way for Mike Mignola--Mignola! of course I had to shake his hand and tell him how much I admire his work. I think Scott Morse introduced me to Hellboy back in Turner development days--and speaking of Scott--I made a beeline to his Red Window booth, shared with another old friend, Jeff Pidgeon and Bill Presing, with the work of Don Shank, Lou Romano, Emma Coats and a few others also on display and for sale. Emma's done a wonderful sketchbook, Bill has topped himself with the beautiful binding of his bookplate art, "Bookplate Betties", and Jeff had fun new Happy Beaver merchandise--I picked up a watch and tshirt. Ditto Bill's and Emma's books, an 11x17 original by Don of his Kurt character, and not least an assortment of the riches Scott provides every year. This guy keeps busy! How he has time for a life I can't say, but I imagine that it must be a case of each passion fueling the other--work and life. 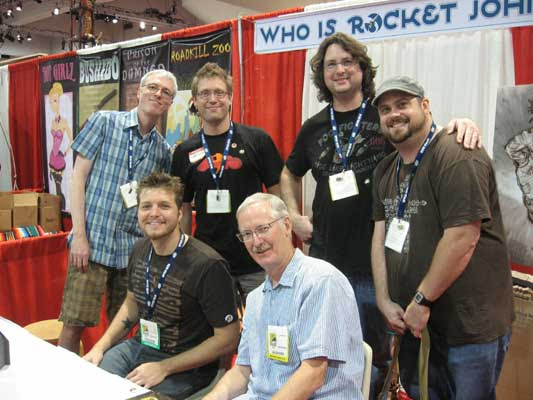 These gentlemen and a host of their colleagues did a beautiful job. Next year: "What Is Torch Tiger?" Paul Briggs (the guy in the hat) was a powerhouse for shepherding the project to fruition. A free button to whoever can name the others present here(just kidding).

Every year more artists who work in animation are publishing. For many of us the Comic-con has become a one stop shopping mecca where we drop in on Stuart Ng's booth and those of the individual artists to pick up the riches. There were so many that next year I've got to do two days just to make sure I can visit them all--I missed E-Ville press, JJ's booth and too many others due to a lack of time and the plain old difficulty of hacking and pushing my way across the endless convention floor one more time.
For all its unwieldy size, San Diego is really a must if you care about animation art and the people who produce it. They're not all there, but plenty of them are and it's a rare treat to get their work straight from the source.

It was a real treat meeting you guys at Comic Con & picking up a copy of your book, signed & all! Sadly, I wish I read some of it while in San Diego, 'cause I packed it into a box at a UPS store & had it shipped home. I won't be able to get my hands on it again 'til at least Friday. Boy, I really regret packing it now...

Anyway, thanks for signing my book & sayin' hello. Can't wait 'til next year!

We miss you over here! I can't wait to pick up the book!

This was a very crowded con this year, for sure. I'm glad a picked up one of your books on Wednesday nite! You looked pretty much in control at the signing, I didn't think about it being your first time - well done all around, I'd say. I snagged something at JJ's booth on Saturday.

I did follow a couple of your booth suggestions, all good ones, thanks. I found it was easier to space the visits over 3 days - you don't have to fight the crowd so much if you can pick your battles.

Hey - I know the younger fella sitting on the left in the Rocket Johnson shot - Nathan Greno - I work with his dad, Tom!

It was great seeing all you at Comic-Con! Congrats on the book and thanks for the autographs. ^.^

I've been reading your blog for a couple of weeks and it's been interesting to hear of your Scrambled Ink project. Today, I was walking about in a bookstore here in Sydney biding my time until my train home arrived, and I spotted it! It was really exciting! Especially since I read it only just debuted at San Diego Comic Con half a world away!

I quickly snatched it up and had enough time to read your story before my train came. Thanks for putting that winsome tale in the world!

I've purchased the book on Amazon now and I'm really looking forward to it. Well done to all of you, by the way!

it was great meeting you. thanks for coming to see me. I cant wait to see your book. congratulations!

I just bought a copy of scrambled Ink in a comic book store here in Melbourne Australia! Just wanted to say it is a GREAT - So nice to see well told stories with great drawings, plus I am a sucker for dogs (I have 2 of them) and Paris (who doesn't!)

Look forward to many many more books!