I've been out of commission the last few days but this week is-finally-the 2008 San Diego Comic Con. I can't remember everyone, so forgive me as this is done on the fly, but off the top of my head here are some booths and people you've got to visit if you don't know them already. Since you're reading this blog, you probably do. But nevertheless a good cast bears repeating, as Universal(or was it RKO?)used to say at the end of their films when they ran the credits.
So here are:

Red Window: Scott Morse, Don Shank(absent in the flesh, but art will be there!), Lou Romano, Bill Presing and Jeff Pidgeon, Booth 4800.

"Who Is Rocket Johnson?"-the epic book with an incredible array of talent inside--and on--the covers. Front cover: Paul Felix. Back cover: Glen Keane. About 24 guys in between. Think you'll be visiting them? Yeah, I thought so. They're at booth 2302.

Chris Sanders will be there again, I believe.

Red Tango is run and designed by an old friend of mine, Cynthia Petrovic. She's a huge Fred Moore fan too. Booth 4201.

Donnachada Daly is a super talented animator from Eire who's at Dreamworks; he'll have his new book at booth B8 of the exhibitor tables.
Incidentally Donnachada(pronounced "Dannika")is also represented in the niftiest art show/auction in a long while, the Totoro Forest Project, which you all must go read, drool and dream about right now.

E-Ville Press manned by Ted Mathot and Derek Thompson from Up North, will have things you won't want to leave without. Booth 1534

Dan Goodsell, he of the inimitable Mr. Toast and an amazing amasser of the most fun stuff ever, will be at booth 4831.

Of course this is far from a complete listing; the above are mostly friends and people whose whereabouts are immediately known to me so I can post their booth locations. I've left out some obvious stops like the great Stuart Ng, Bud Plant, Super 7, Fleet Street Scandal, and Graphic Collectibles...but it's late, so before Hulk smash! and Jenny crash! I'll put this post to bed. 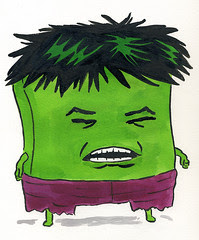 Thanks for this 'virtual tour' of the some of the best of the San Diego Con. Wish we could be there to meet you! -and to soak up all the inspired work on display. Have a great time at your signing- take lots of water and sustinance...

Cheers from soggy Toronto where this year we are breaking rainfall records. And I am storyboarding my tiny brains out.
(^_^)-Arna

You're welcome, Arna. Thank you for the good advice!

You're welcome. We're gonna order a copy of Scrambled Ink from Amazon...can't wait to see it!

Thanks for the mention, Jenny..I will be going over to the Dark Horse booth to see if I can snag a copy of your book..I've barely had time to make one fast run to Stuart NG before getting back to my little 10 by 20 foot fortress all day!! I'll get there a bit early tomorrow and hopefully can snag a copy!!!

PS I found some "blasts from the pasts" in a folder in my garage recently..will scan and send along a few gems from it..haha...the good old "manguin" days....!!!!