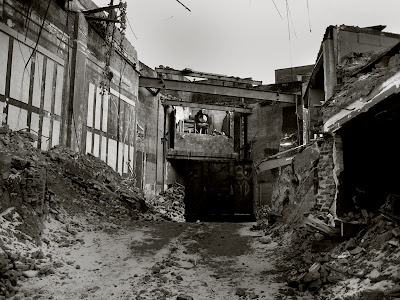 this photograph is titled "Wrecking ball at the movie palace"; I think it's apropos
I periodically keep apprised of industry doings by scanning Nikki Finke's peppery blog Deadline Hollywood Daily. Like the trades(Variety and the Holllywood Reporter), I've found that it's in those supposedly non-animation arenas that I always seem to find out the dope on what's going on around town. Often we animation people are too busy drawing, animating and living life outside of work to immerse ourselves the way our live action brethren do. I can't count how many times I've read an announcement about a project I had no idea was in the works--at my own studio. Also like my colleagues I'm interested in all film and perusing film news can be addictive. So the blogs like Nikki's are interesting and indispensable.

Here's a recent piece of news from DHD that I think matters:

"WHAT A DAMN SHAME! 20th Fox To Close One Of The Last Studio Research Libraries"

If the closure happens--and there's no reason to think it won't--it's sickening.
Believe me, these archives are incredible and invaluable--much more so than even the resources of the internet can provide as they date back almost a hundred years, containing browsable materials that were painstakingy accumulated and used over and over again for countless films. Books--most probably long out of print and unavailable at any price--hundreds if not millions of photographs and clip files, all kinds of stuff. "Browsable" is the key term, and now that all of us are internet-savvy it's something I think everyone can appreciate: if you want some information on what a kitchen would look like-what they'd be cooking and eating--in 1905, sure-there are places to Google. but good luck if Amazon doesn't happen to have a title dedicated to just that topic with "1905" in the title.

On the other hand, a Studio Research Library may well have shelves filled with period cookbooks and illustrated housekeeping volumes whose titles appear nowhere on the internet. All cross-indexed and even just searchable by the naked eye on a shelf. Collected over many decades by researchers working for countless directors, art directors, costumers, set designers, writers, even actors.
The famous Margaret Herrick Library at the Motion Picture Academy has a description of its holdings (available to the public by the way) that gives a tantalizing idea of this sort of thing.

Obviously these libraries saw their busiest days when the studio lots were self-contained with dozens of projects constantly in production, but well after the demise of the "old" studio system they were still going strong. As the post points out the costs of running such a department is negligible, and they're historically priceless.

The Disney studio famously maintains an Archives and Animation Research Library, one that isn't going anywhere thanks to the wisdom of the studio management over the years. While it would seem that their existence would be unique to an animation studio's need for storing reams of valuable production art and materials, at the time Walt instituted the morgue such repositories were already common in live action; in fact they were started during the silent era.

[One surprising fact I had no idea of: apparently the Samuel Goldwyn Research Library is housed on the Dreamworks Animation campus. Say what? Heaven only knows where they've stashed that--DW is fast running out of space these days and frantically building out. You can bet if I'd known the Goldwyn collection was there I'd have made it a point to have a peek. Or two.]

But thank goodness Disney realizes the value (and I don't mean monetary value) of its past-not for sentimentality's sake but for hardcore learning and vital, irreplaceable information. It pays back in that it helps us make better movies.

The same is true for these other Libraries, believe it. The cost of keeping them open is next to nil but once dissolved they can never be replaced. The internet isn't the answer to everything.

HERE is an archived article about the closure eight years ago of Universal's research library. Same old story.
Very depressing reading.
George Lucas, where are you? You're our only hope.*

* Someone read my mind: here's one of the reader's comments on Nikki Finke's post about the Fox Library closing:

"This is indeed horrible news about the Fox Research Library closing. It is sad that these resources are disappearing from L.A. However, there seems to be some misinformation posted here about other film research libraries. George Lucas RESCUED the Paramount and Universal Research Libraries and has made them available to film and TV production personnel throughout the industry, not just for Lucasfilm employees. Both of these collections would have been sold off piece-meal if it wasn’t for him. Lucas also started his own research library back in the late 1970s, and employs a staff of full-time research librarians. All of the library collections housed at Lucasfilm are available to the filmmaking community, and have been for years -– these materials have been used by many film, TV and stage productions. George Lucas is a huge advocate of libraries, and should be commended for his efforts in preserving these studio collections which would have otherwise languished or disappeared altogether."

I hadn't know Lucas has already gone to bat in a big way for those other collections, but I'm not surprised. Hopefully either he or another such will step in here. We can hope.

The former MGM Research Library ended up owned by Warners, which housed it on the bottom floor of the tall office building in the Academy of Television Arts and Sciences complex at 5200 Lankershim in the early 1990's. I don't know if it's still there but at that time they were charging $60per hour to access anything in its shelves. That collection was amazing, dating back to the silent days.

You didn't mention the one archive that is specifically created for the use of animators... the one that is free and open to the public!

be sure to check out the latest at Nikki Finke's.

Yes, it's true that George Lucas has collected a great many of the old studio research libraries, but the film industry in Los Angeles needs libraries too - those of us who work in production design want the Fox Library to stay in LA!

BTW, you can access the library's catalog here, it's accessible to all through the web:

Man that is such a travesty! I had no idea George 'rescued' those other libraries... awesome! Maybe he'll do it again... something needs to be done for sure :P

The old MGM library is at DreamWorks. It's presently called the Lillian Michelson Library. The estimable Lillian is the long-time librarian & current owner of the collection.