As good as animated 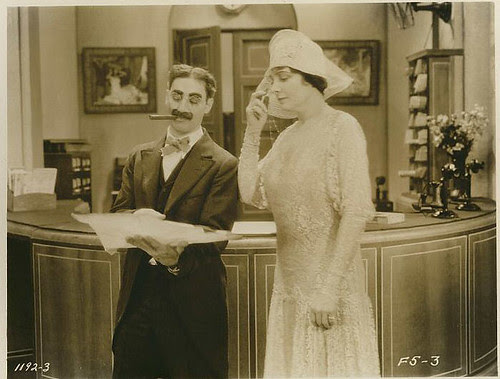 Here's an original photograph from the first Marx Bros film, "The Cocoanuts", circa 1929[for sticklers, no, I won't count their lost silent "Humor Risk").

"Cocoanuts" had been a hit live show on Broadway and on the road for the Marxes so it was a natural project for their first sound film. They shot in New York's Astoria studio while simultaneously appearing on Broadway in the show that would become their second film, "Animal Crackers". By our standards--indeed by the standards of the mid-1930s--it's a crudely-shot and recorded film, more a record of the stage show than anything remotely filmic. Here Groucho's holding an important real estate map for Margaret Dumont's perusal. One detail that gives you an idea of the problems they had with very early sound recording: the paper Groucho holds here is damp, as in wet.
All the paper in the film--and there's plenty of it in many scenes--had to be soaked in water before filming as the crackling of the dry paper sounded like exploding conflakes run amok on the soundtrack. This eliminated the grating sound but made for very odd-looking documents. Watching Groucho doing his routine with Chico, trying to unfold a sopping map the size of 24-field paper...well, that's something. He manages it, though--of course. Did anything ever nonpluss Groucho? I actually crossed paths with The great man at my dentist's office, of all places, when I was a kid. I was in abject awe of him, even though he was then very, very old and fairly doddering, with his beret dwarfing his head.

I'm posting on this somewhat atypical topic because this photograph was handy this morning--and also because I believe the Marx brothers--eldest Chico("the Italian"), mute Harpo, cynic Groucho and baby brother Zeppo were and will always be one of the most brilliant, unique and inventive bunch of ex-vaudevillians ever to grace the medium of film. They occupy that rare niche that is inimitability: not to be copied. Their comedic stew is as fresh today as it was in the 1920s--an unbelievable achievment. It's rare that human beings exist that can't be caricatured in animation directly, so extreme are they already; the Marxes qualify. That said, their great films--the 5 they made at Paramount, and the 2 best of their MGM period--are fertile fields for any animation story person--any animation artist--to watch and learn from, even if nothing they do can be applied exactly as is. One comes away from watching their films with an exhilirating sense of freedom and fun. They are a tonic for anything that ails ya.
Obviously I'm a fan. If you haven't given them a try, though--start with, say, "Monkey Business", or "Duck Soup". Or "Horsefeathers". Well, any of them.
There's brilliant movement, dialogue, gags. Just a suggestion.

Wow! You actually saw Groucho? Oh, how I envy you.

I discovered the Marx Brothers rather late in life. I grew up in the "dark ages" before all that cool media was available. My dad use to tell me about the Marx Brothers, but I was practically an adult before I ever saw one of their films.

These guys brought an energy and zest to motion pictures that's sadly lacking in today's movies. Yes, even in animated films which often substitute wild and crazy action for humor.

An exhilarating sense of freedom? Yes, I can sure go with that. The Marx Brothers were a huge influence on me, but you probably already knew that.

Nice picture, nice comments. "Cocoanuts" is one of my favorite Marx Bros. films, in spite of the awkward photography. I can't wait to see it again so I can look for the wet papers.

Hi Floyd--I didn't know they were, but I could have easily guessed! : )

I got very lucky, as the early films(my favorites)were on good old KTLA Channel 5 when I was a kid, on Sundays. Seeing them rarely made them special--kind of like the 7-year Disney release schedule. ; )

Paramount home video put out a boxset DVD collection of thier Marx Bros. movies. Unforturnately, none of the films were remastered and the prints they did use were faded and scratchy; some even had tape splices! Maybe some day we can see the Marx Bros. films look as good on DVD as the Criterion Collection laserdisc of A Night At The Opera. (Also, some extras on the Paramount boxset would have been nice.)

The 2 Thalberg films at MGM show the brothers at their most polished; still, their early primitive films at Paramount are just as funny because they are truly Marx-ian and very raw. Even though the films after Thalberg died have been panned somewhat, they are still funnier (and will stand the test of time) as compared to what some of today's "comedians" crank out. Thanks for posting that great pic!

I love the Marx Bros and Laurel and Hardy films. As a kid and even now as an adult they always make me laugh.
One of my earliest "stabs" at drawing my own cartoon strip was my drawings with gags lifted from Marx Bros movies.

Great post, Jenny. I discovered the Marx brothers in kind of a backwards way. The old Channel 2 in Denver used to play re-runs of "You Bet your Life" every afternoon when I was a kid. I liked Grouco, he was funny, but in a more sedate, TV friendly way. Then I saw "Duck Soup" when I was 13. What a revelation! I was a fan from then on. In fact, I'm going to go order me up a couple of DVDs right now!

duck soup is the best !

its important to see these films in the theatre with a live audience, and ill tell you why i think so. i always thought the photography and staging was crude but guess what ? all of those medium shots make sense when youre sitting there looking up at them. and when groucho makes a little aside or "breaks the fourth wall " so to speak its is very funny because it seems that surely he is looking at you !

also, there are these great waves of laughter that roll through the crowd. it seems to never end, just ebb and flow. i know it is almost impossible to find a screening of these things but if you go to one youll see what i mean - the audience was laughing at the still shot of a newspaper front page, announcing the party to be held that night. we just knew funny stuff would happen there.

also for animators harpo is a moving goldmine or clear funny poses.

I've had a perfectly wonderful evening. But this wasn't it.

Well, Art is Art, isn't it? Still, on the other hand, water is water. And east is east and west is west and if you take cranberries and stew them like applesauce they taste much more like prunes than rhubarb does. Now you tell me what you know.

The Marx's were amazingly ahead of their time and still remain fresh, as you say. Their raucousness predated a similar sensibility that became the mainstay of popular music during the baby-boom era (Beatles, Monkees, etc) , which continues to make them easily accessible. It's the way they spark with wit and glide effortlessly above whatever stodgy pretension they face off with. They were the ultimate deflators of pompous baboons with brittle egos.

On a side note, I actually love the vaudeville aesthetic of their earliest work and the slightly awkward way backdrop players remain standing around with nothing to do after a musical intro while Groucho wisecracks. It creates a satisfying, yet surreal, element, because it's so removed from what the contemporary film experience is like now. Any film that connects with a feeling of live theater is alright by me because its emotional payoff is immediate and not hiding behind a veneer of special effects, etc. The Marxes were very pure in that regard.

One of the things we are missing in films today is the enfluence of Vaudeville, which is what made early television so very funny. Of course, the Marx Bros. were heavily enfluenced by Vaudeville, and that is why they had such great timing. Another funny film from that era that has fast, snappy dialogue and head-spinning timing is His Girl Friday, with Cary Grant and Rosalind Russell. Of course, it lacks the physical humor and sight gags of the Marx Bros. but more than makes up for it.