The price of creativity, Disney-style 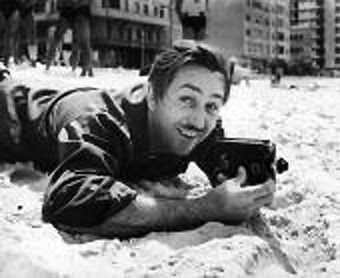 Over on Cartoon Brew Jerry Beck has cited a rare exhibition of Walt Disney's Carolwood Railroad train in southern California.

With the post he's put up a terrific picture of Walt apparently seeing his gift locomotive, the "Lily Belle", for the first time. Three Disney employees involved in crafting the surprise gift are there--one is Ward Kimball, the preeminent train fanatic of all of Walt's staff
(Ollie Johnston included. An aside here: when I visited Grizzly Flats, Ward's backyard, full-sized train setup, in 1981 shortly after reading the unpublished galleys of "Illusion of Life", I was astonished at the size and breadth of Ward's trains big and small. "I don't get it", I said to Ward, "in the piece on Ollie, his trains are written about--that he has a miniature track in his yard like Walt's was...but there's no mention of any of this in your bio at all!" (forgive me, I was a teenager and extremely naive--not to say plain dumb)
Ward's silent response to me was an indescribable expression that was, shall we say, wryness personified, and very funny too. God love the wonderful messrs Johnston and Thomas--but there's clearly something about competing train fanatics and 9 old men.)

Anyway, it's well worth a click to the Brew to see the photograph of Walt: he's 1000% thrilled--his face is completely lit up. An engineer's hat, not quite able to fit on his head, perches somewhere above his cranium. And from that same delighted, hard-driving man came this POV when planning his model track at his home with this locomotive:

Walt equipped the property with a red barn (modeled after his family's barn back in Marceline) with woodworking and machine tools. He also enlisted the aid of studio staffers like Roger Broggie, who had established the Disney Studio machine shop (and whose son is author Michael Broggie). He decided that it would be more exciting if the tunnel were shaped like an S -- so that riders wouldn't be able to see the light at the end when they entered it. One worker advised Walt that it would be cheaper to build the tunnel straight. "No," said Walt, in a classic Disney response, "it's cheaper not to do it at all."

That is the attitude that made the Disney Studio, that made "Snow White", "Pinocchio", "Fantasia", "Song Of the South", "20,000 Leagues Under the Sea", "Mary Poppins"--and Disneyland and EPCOT.

Walt was no fool. He gets labeled a "dreamer" all the time--and he certainly was, but he also possessed a midwestern shrewdness and could certainly be what we call "cheap"--when in his opinion money wouldn't pay back in results. It's often been said he needed his less imaginative brother, Roy, to rein him in and hold the pursestrings of his empire-building, and that's true, but unlike many other visionaries and gifted producers, he never seemed to run out of steam. If he lost his initial enthusiasm for animation in favor of community planning and who knows what other concepts lost to his death, he wasn't dishonest about it(to the chagrin of his animation staff). And he'd have found a way to get the entertainment and artistic drive of animation in there somehow, anyway.

I digress wildly, but anyway, go and peek at that photo.

As for me Jenny, I love the photo that illustrates this post, as it was taken in my favorite country: Brazil, in Rio, one of the most beautiful cities on Earth.

Yes, Didier--I love this photo(please forgive the low quality-all I could use).
I hope to visit there one day; my friend Ennio is probably lying on the same beach this minute. I have a strong feeling it might be impossible to not look this happy when on the beaches of Brasil!