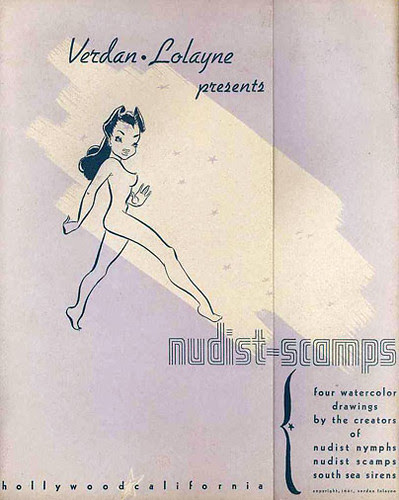 This is a wee bit off-topic, but since it seems to clear up a question I had about the possible involvement of Fred Moore(or any animation artist), and since it does involve a type of art near and dear to the hearts of virtually any cartoonist of the golden age, here goes:

You'll recall that some time back I posted Dan Goodsell's photos of his collection of "Nudist Scamps" statuettes; charming, well-posed girls who resembled Fred Moore's famous pinups in 3-D. These are attributed to a Verdan Lolayne of Hollywood, California. Later called(or aquired by)"Rick's Figurines", these apparently were sold on Hollywood Blvd in the early 40s. Here's a new find, a portfolio of complementary designs; they contain 4 watercolors, which I think were line prints to which real paint had been applied. Here's an example of one of them: 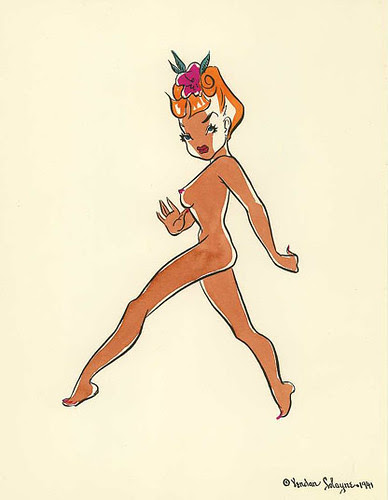 Clearly not by Fred Moore, and it would seem "Lolayne" is an actual individual who did these drawings. Or maybe not. But it's still a neat style I'll post the others if anyone's interested. I do have to say, though, that I prefer the statues to the 2D versions.

I have the four original verdan pastel water colors of the nudes. I received them in 1965 as a birthday gift from Billie Eckstein, a friend and antique dealer in venice California.