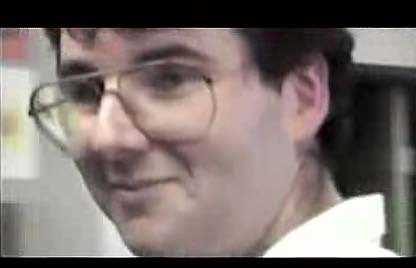 Two lovely posts in other blogs have come to my attention in the last few minutes, Story Boredom and Mark Kennedy have both posted tributes to Joe Ranft, whose death occured one year ago last week near Mendocino, California.
The Story Boredom post is wonderful--and of all things, it includes a video of Joe himself performing a bit of magic, circa 1985--two years before he taught at CalArts--a time when he'd just left Disney to do his own thing and a few short years before he settled into his incredibly productive work at the young Pixar studio. It's silent footage, but it's all Joe, and wonderful to see.

Mark's contains a doozy--Joe's just been rightfully honored in a special way at Disney Feature Animation--go see his photograph to find out how. And the previous post of Mark's has some of his own thoughts about knowing Joe as a teacher and friend. Mark's is an intensely valuable, professional blog concerning storytelling and filmmaking, and he rarely(if ever)alludes to anything personal, save for how it affects his art. Joe was certainly a personal influence on and friend to Mark, and as for his influence on the continuing art of his students and colleagues--well, go read what Mark has to say.

Hey jenny, thanks for the kind words, it's too much and you make me blush. I am glad you enjoyed my post. I wasn't as close to Joe as you might think, I guess, but you are right that he had a HUGE impact on me as the only person I really know that seemed to be pursuing a career as a story person and not doing story as a means to become a director. Not that there's anything wrong with being a director but being a story artist is a great thing and few people act as if it's a great thing. Joe made me feel all right about being a story artist. If it was good enough for him it is good enough for me. Anyway what I am trying to say is that he was really my role model. He was able to do this job forever and stay positive and always had time to help everybody, and I wish I could be like that too. What greater accomplishment could there be?

Darn it--I didn't allude to the main point you make here and in your post, too and I meant to.

I know exactly what you mean about how he dignified the job of story. I'd thought of that too and it made me feel so good that Joe clearly felt, as you point out, that to be a story artist is a great thing. Absolutely!
The only other person I put in this category is Glen, because for so many years, as other animators of distinction went on to move "up"(NOT that there's anything wrong with that, obviously)when the opportunity presented itself, Glen loves animation and wanted to continue doing it. He's directing now, but it's been on his schedule and for his reasons--he could have done it a long time ago had he chose. Joe clearly felt he had the best job in the world(at least that's how he made it look), and yes, it was a great thing to be, indeed. That's a wondeful observation on your part.
Now that that story room is renamed, how can you guys ever move? : ) That photograph really made my day.

Yeah, that was my first thought...we're supposed to get a new building, but I will stay behind and live out the rest of my days in the Joe Ranft room.

Glad that photo made your day, our mutual friend took it (wink wink).

I remember an evening conversation with Joe while working on "Toy Story2." I spoke with him about directing, but Joe considered doing story a more important job. Directors tend to be scattered doing a lot of stuff, while the story artist can focus on simply telling the story.

In his own way, Joe was actually directing the films he worked on. His presence on a film can be seen and felt. Few story artists have such a profound influence on the projects they touch.

Hey Jenny, thanks for the mention and sorry for making you bawl at work. It's all for a good reason right? Your rememberance of Joe was beautiful and touching especially for those who didn't get to know him that well. Thanks. Oh and feel free to embed that video of Joe on your site if you want.

I have more of that video and might post it if I ever figure out how to have the sound not drop out.

I remember Joe gave a talk at Disney a few years back that had such a profound effect on me. He was talking about the necessity of story in all our lives. His eyes welled up and his voice cracked as he described stories as being essential to sustaining life, even more than food and water. They are what nourish the human soul and sustain us. As he spoke, my attitude about story was profoundly changed from that moment on. I always saw story as a creative challenge, an audience's laughter the greatest reward. Now I realize story is so much more. Joe opened my eyes to the power and importance of story to humanity. Joe saw story as the greatest gift he could give of himself, and he's still giving, through all of us that learned by his example. Thanks Joe, for everything.

Thanks Jenny once more for the great entries. I am in Taipei and I had dinner last week with James Wang at Cuckoos Nest. We were reminiscing about people we knew. James produced some photos of Joe along with Jerry & Rebecca Reese and Steve Moore from the Brave Little Toaster crew. It was touching to see them so young and excited. Like they could conquer the world.

Floyd, Chris, Tom,--and 'skribbl'!--thanks, guys, for writing here. I love reading your thoughts and I know hundreds of others do as well.

I was struck last year on various blogs--Ronnie's for example--by how many people wrote incredibly touching things about Joe while first saying, "I didn't know him personally, but"--and then went on to describe him exactly as if they had. That's a hell of a profound effect for a story guy to have made on people he never met. And that's certainly Joe all over.