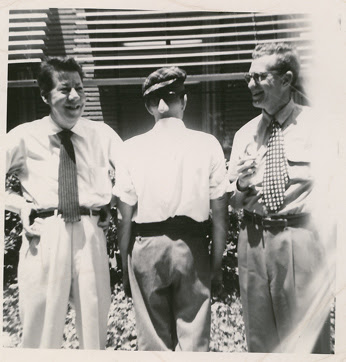 The supposedly "shunned" Fred Moore clowning with his coworkers, including animator John Sibley circa 1952, out in front of the Disney feature animation building. Courtesy of the private collection of James Walker.

Animator David Nethery wrote an email addressed to several bloggers, myself included, regarding a renewal of the hoary old chestnut, "Fred Moore's tragic, gin-soaked death". The quotes are mine, and are warranted as this sad coda to the fabulous life and work of a truly important figure in animation history keeps popping up--most recently, apparently, in a book by a previously published author. I'd like to name neither him nor the book, nor the Indian website that is treating this erroneous story as a kind of expose or scoop. It's pure gossip and untruth masquerading as history.

Before I write anything else, let me simply state the truth, basic and unadorned: as proved by the newspaper reports of the day and his own death certificate, Fred Moore died the day after a car accident, in St. Joseph's hospital(just across the street from the Walt Disney studio, his employer--and where his boss Walt would also die 14 years later).
His wife was driving their car, which was hit head on by a second car--in other words, it wasn't the Moore's fault. I've been told by James Walker(a much more expert authority on Moore than I am)that Mrs. Moore was making a u-turn on Foothill blvd. when the oncoming car hit them. Both Fred and his wife were hospitalized. Fred died the next day of internal injuries.

That's it. No "drunk driving" on Fred's part, no drama beyond the profound tragedy of a much-too-young artist killed in a traffic accident.

The reason this matters is that the stories that are repeated and told as fact range from the merely inaccurate to the ridiculous.
Some have come from men who were bona-fide coworkers of Moore's at Disney's, but that doesn't mean that they knew exactly what happened--that their own memories weren't exaggerated or tainted by personal feelings(does anyone else know of relatives, elderly ones, who tell whoppers about family history? Because I certainly have).

Often the stories contend that Fred's old friends sold him out, or ignored a desperate plea for money to pay hospital bills(!), or similar yarns. They always suggest that Fred's death was a direct result of his alcoholism, if not also due to the neglect of his studio or former friends. Well, it seems believable and likely...but life trumps fiction on a regular basis, and it just didn't happen that way.

Nor did Fred die while inserting his key into his front door, expelled from a Catholic hospital that denied him treatment due to lack of funds, nor was he(as this latest nonsense contends) a sadly unemployed drunk. He was fully employed at the time of his death. He was busy working on "Peter Pan", animating the mermaids and lost boys(it would be released a year after his death).
He was an 839 union member with full benefits(anyway, even if he'd been a bum on the streets, St. Josephs would not have turned him out with serious injuries). It's all absurd, but boy! What a story, eh?

It made David angry, and he wondered in his email if perhaps he wasn't overreacting. Actually, no.

In any history errors abound as a matter of course, but in film history they're legion. Even the most careful researcher has made a few of his or her own mistakes to their dismay, and they're eager to correct them when they discover them. In personal histories--biography--it's a particularly insidious problem. These were real people, not "characters", and we owe it to them to be as fair and honest as we can when writing about them. The animation community has always been a small fraternity and people gossip then as now.
That the unremarkable yet tragic accident that took Fred Moore's life was exaggerated and inflated isn't news; what is disgusting is that it's been used to effect an agenda against Walt Disney himself and/or Fred's coworkers. Certainly there was politics aplenty at that studio; there's politics at all studios--that's life, and business. But while Fred had been "fired"(or rather, laid off) in 1946, so were many, many other artists--including those without the performance problems Fred's work suffered from. The really big deal was that although his lifestyle hadn't changed, the animation board(the "nine old men")hired him back with Walt's blessing in 1948. And he was retained at Disney's until his untimely death. That's fact. So much for Walt's poor treatment of a former superstar.

Again, stories abound, and always will; but for nonsensical junk to be published in a book as fact is a wee bit sickening. And of course, it makes every other thing a sloppy author publishes suspect as well, fairly or not. It's a shame....and it's shameful. A great artist deserves better.

UPDATE: Amid Amidi has both quoted David Nethery's eloquent email on this subject and added his own well-phrased thoughts. He also names the author and links to the online sources that have unfortunately picked up this phony story.

Good post. Anyone famous enough to be written about, I suppose, ends up being written about as what their biographer wants or needs them to be in order to prove a point or to make a better story.

Well said! Thanks for opening my eyes and getting the truth out there.

I'm sure Fred would be happy to know people are out there defending his great name.

Thank you Jenny. Since 1974 I've been heard many versions of Freds death from many people, including artists there at the time. My favorite whopper was the one where Fred passed out drunk in his driveway in the morning and somehow his own car rolled over him. I'm still trying to figure out the choreography there. I also heard the one about the denied funds when they passed the hat.

But this is the first time I've ever heard your version. But it does sound right. I saw the death certificate as well and you are right, death was 24 hours after the accident from massive trauma to the chest.

Finding the truth is tough, not because people are nasty, but some have an agenda,or heard it wrong,or want to believe the dramatic, or even the older folks simply want to rewrite painful parts of their past. Life is never as neat as we'd like it to be.

Thanks for a good deed.

A wonderful piece. Thanks Jenny. Perhaps you should submit this to the ASIFA Biopedia as well?

Jenny--Many thanks for the corrections over at cartoonbrew on the names of Moore's daughters AND the fact that I didn't know that it was his second wife. Serves me write for firing off the information so quickly but I was so angry I wanted to get the truth in print as quickly as possible. Nobody can know everything which is why I am glad that folks like you are willing to share. I am still wondering where I came up with those names for Moore's daughters. Thankfully the rest of the information should be correct. Jim

Great post, Jenny. I always enjoy reading what you have to say about Freddie because you are so passionate about the subject. And through your passion comes truth. Thank you for this.

I use to talk to Ward Kimball about Freddie. Since Ward was an old buddy and colleague of Fred's, I wondered why He wasn't consulted more often?

I arrived at Disney too late to meet my hero. I was still in school when Freddie passed on. I did get to hear a lot of stories about Moore. Some obviously slanted by those who had an agenda.

I still have my Freddie original drawing given to me by another Moore colleague, Freddy Hellmich.

Thank you, gentlemen. I deeply appreciate the feedback and encouragement.

I'd say more, but right now I'm completely swamped! James, I will call you asap--no kidding.

And Floyd: I did interview Ward! He was the very first person I spoke to about Fred, the one who got the whole ball rolling for me way back when...eventually I interviewed him in depth; he refused to be taped(for good reason--he'd been badly burned by a published interview which included a lot of off the record stuff that was unfortunately printed), but I still got loads of great notes and best of all, an entire day at Grizzly Flats with Ward and Betty. They'd been very close to Fred while he was married to his first wife; Ward, Fred and Walt kelly were a kind of 3 Musketeers. : )

I'm not sure if my last comment worked or not, so I'll try it again.

A friend of mine found on the net. It has Freddy's death certificate, headstone, and a newspaper article published back then.

I knew there was more to the story then what I have heard. Fred was a great guy, and a great animator.
Thanks Jenny!

I believe the book Nine Old Men is where I first read about Moore and the story given is of his tragic life. I'm wondering, though, they point out that nobody from Disney, including Walt, went to his funeral...do you think this book which is written by insiders could have it wrong? Where is the newspaper article you refer to to prove your version? I'm not saying you're wrong, but you seem to have a lot of emotion without supporting facts.

Wow thanks for this post. My grandmother is Fred's cousin. Even the family didn't know the truth. One story I heard from family was that he drove a sports car off a mountain road because had been going to fast. Then I read several accounts of his drunkenness on the net. Glad it's all nonsense.