Another plug--unasked for, as they all were...but Rodolphe Guenoden is just insanely crazily gifted and funny. Also very supportive and...did I mention funny? He's a hell of a hand with women--the drawn ones; his wife is the woman in the panel, so he knows how to draw beautiful girls. He's done at least one sketchbook, which is a must-have. 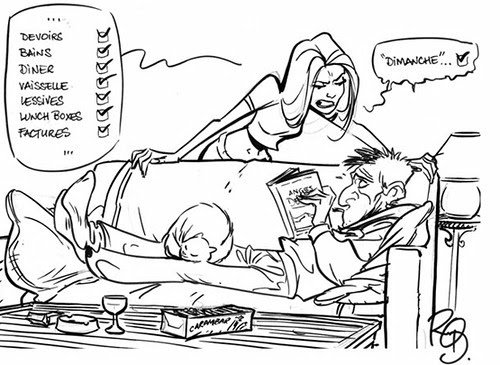 Here's a panel from one of his comics featuring himself and his wife at home on a Sunday. Rodolphe I became aware of on a long ago film where he interpreted and animated the sexiest mayan ever, Chel. He's got a lot of style, as does his entire family; on Halloween his clique rented film costumes from Universal and so at the lunch tables we were treated to a tableaux of he and his wife and friends in full Louis XVI regalia, wigs and all(they looked good, too). Now he's a story artist. His website's well worth a lot of clicking.
And while I'm in a French frame of mind, I can't forget my neighbor down the hall Patrick Mate. 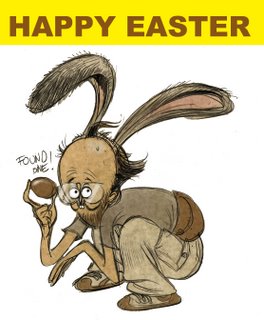 . God, what a painter and caricaturist! Also just the kindest man you could find. Very lucky I am to be around such guys.
Note: both images swiped from the respective websites without permission at all; when they find out I'm in heap big trouble, so don't try this at home!

Those are genius. I can really relate to Rodolphe in that panel, though my nose isn't as big. Patrick's drawing is hilarious. I love the long hand, like a bunny's foot.

wow great links, thanks for posting them. :)

Rod is good people!! He never remembers my name but always my face, and he takes time to say hello and catch up...great guy all around...

I can't wait to read all of Rodolphe's "Message in a Bottle" in the next Flight anthology! Just saw a preview here (scroll down a bit to see it).

i just came across your blog, wow, someone who draws well AND who knows about Preston Sturges and Michael Powell. double dose of impressive.