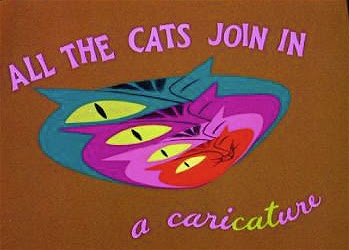 Who's got the drafts for this segment of "Make Mine Music"? Anyone?

This wonderful short is cited more often than any other individual piece of feature animation as being the Freddie Moore style(of design, for the girls, obviously), with the "centaurettes" Of "Fantasia"s Pastoral segment running a close second...but the timing of this short's production is a bit problematic when considering how much Fred Moore himself had to do with it; he was on awfully thin ice at Disney's in 1945-46 and in fact was fired the same year this was released. I'd swear he did do animation himself in it, and it's inconceivable that he didn't supervise the overall style of the thing. It's great for any number of reasons--a perfect match for Benny Goodman's music, not least--but it's also fun to see such Fred staples as his iconic little girl in pigtails(who was a caricature of one of his own daughters, judging from the names given similar-looking centaurettes) move so beautifully and with, yes, the Freddie Moore charm.

And who designed the keen titles(like the one above)? Tom Oreb, perhaps?
tags technorati : feature animation, disney, cartoons, fred moore,

Gosh, Jenny, I wish I did. I taught a Dreamweaver class in Portland a couple years ago and one of my students was a former Disney and Warner animator whop was dear friends with Grim Natwick. She had, upon the disolution of her department at Disney, absconded with a pile of pencil tests. She said it was a consoderable pile. She lived just up the street from me, but alas, I never went to her house and saw these things. She had a pile from Warner, too. She showed me a picture of Grim with his arm around her, a very old man and she much younger.
I will TRY to recall her last name. Her first name is Liz and she lives on Salmon in Portland in perhaps the nicest house in that town. It was once a seminary. I may have her name on something somewhere.
best,
Josh

I don't know if Tom Oreb designed the titles, but I seem to recall that his brother, Frank Oreb, was one of the primary animators on the 'All the Cats' sequence. Perhaps somebody with the drafts will turn up so we can find out who actually animated on that. Sadly, Frank died in '47.

Sounds like Josh may be describing Liz Holzman, who indeed moved to Portland a few years ago.

Yes, I was thinking it must be Liz H. he was referring to; I worked with her at WB in 1992-94; I remember she worked for Dick Williams in another era, and also Brian Froud, along with other interesting folks at various commercial jobs at smaller studios; I wouldn't be suprised that she knew Grim, but I would be suprised if she had much info on Fred Moore. You never know, though.

That's right! Her last name started with H. Holcomb, maybe?. She knew Dick really well, I recall. Liked him, even. She told me the Secret Story of the Iron Giant and how the WB execs didn't seem to know it was even being produced. Maybe that's why it's so good!

Hans--thanks a million! Very exciting to have that info!

Hi Jenny....I knew Larry Kilty who had worked at Disney. He had a few stories about Fred Moore. All seem to agree,Fred Moore was one of the best natural talents that ever passed through the gates at Disney!
I produce community tv shows in my area here in Santa Cruz. A recent interview I just completed was with the late Eldon Dedini. He was working at Disney's when Fred Moore was there. Eldon, who later worked for Esquire,New Yorker & Playboy was famous for his curvey women. I'd like to send you a copy of the interview.