All this thinking about Fred Moore lately has me hopped up to do two things: rewatch as much of his animation as possible, and look again at the few behind-the-scenes glimpses we're lucky enough to have available of him and his coworkers, mainly from "The Reluctant Dragon", which I put on last night. I'd forgotten that the titles were as charming as the best parts of that compilation feature. Here's the title card for the animation credits: 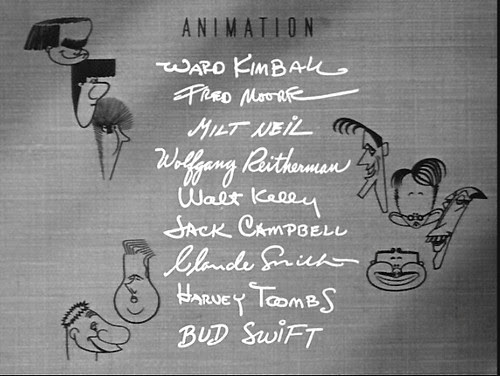 The caricatures are surely by T.Hee(who's credited on story). The accompanying signatures are the artists' own. This looks like nothing so much as a college yearbook, and with the lilting, wacky "Reluctant Dragon" theme playing over it, is a very appealing lead-in to the film proper.
There's always been a lot of accepted wisdom that Walt Disney promoted himself as the guy who did it all--including, supposedly, all the animation--the "drawing". While quite a few clueless reporters and feature writers seemed to have some vague idea that Walt was somehow responsible (in the holding a a pencil sense) for all of the Disney Studio's animation(and of course as boss and instigator of every project, he was), it's interesting to note that long before cartoonists and animators got much individual recognition, this title card is a heck of a graceful presentation. Could it have been partly motivated by Walt's gratitude for all these men, who worked through the strike when this film was released?

Both Fred Moore and Ward Kimball appear--unnamed--as themselves in "Dragon". Originally(as per the drafts)Fred had actual lines and a bit more screen time--why that was cut, if it ever existed in a release print, is unknown--it was a brief enough exchange, with (if I remember correctly) Fred explaining a bit about the Moviola machine he's working with, before all three--Kimball, Robert Benchley, and Fred--watch "How To Ride A Horse" on the moviola. The cutting of this business results in a rather bad edit, with an abruptness that doesn't exist elsewhere in this fairly slick film. It also seems--I'd have to run it again--that the shots of them gathered around the moviola both before and after the Goofy cartoon are exactly the same! But it was late, and I might have been too punchy to notice a difference.
What a kick this must have been, to show this film to their families--not many people have home movies of themselves at work in Technicolor. 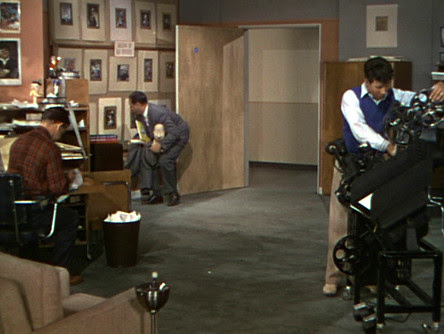 Benchley sneaks into the animator's room; Ward is about to notice him and, in closeup, upon seeing famed humorist Robert Benchley(he of the Algonquin Round Table--crouching down in front of him)drawls the priceless line: "Weeeelll...what goes on, pal?" 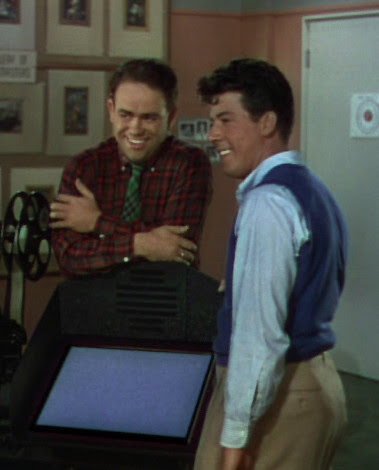 a cropped shot--Benchley was at left of frame--of Kimball and Moore again, at the end of their sequence; they're looking offscreen as a transition, hearing Norm Ferguson panting away as "Pluto". Fred's doing his best Dick Powell impression here.

So many blogs out there like this, I love it! all the animation pages... And art pages.

Pretty cool to explore them, I just link from one to the other via the comments.

Hi Jenny, thanks for posting this wonderful Fred Moore stuff. I've been a fan of his art for quite a while but I have only seen a little of his actual animation. I think I remember reading that some of his best stuff was in some Mickey shorts. Since you've been re-watching his work, do you have any favorites? Are there any good collections with a lot of his work? Thanks again for taking the time to post this stuff! Very inspirational!

I remember a documentary on Art Babbit from years ago where they had a black and white photograph of Babbit and Moore walking down a dark corridor facing the camera; their figures back-lit from light streaming through the door behid them. It looked very 'The Right Stuf'.

Keep these coming. Your blog is fantastic.

I had a chance to view this film with the late Joe Grant. He had many funny stories to tell as we watched the movie.

This was a very special time at Disney. Wow! Everybody was so young.

Interesting thought about the title card being gratitude for those guys working through the strike, but I'm not sure it fits. Tom Sito was recently telling me a story (and I sure hope I'm not misremembering this) that Walt Kelly and Ward Kimball were very close before the strike. Both went out when the strike started, but Kimball (despite a background that was apparently very pro-labor) quickly went back to work. Kelly stayed out, and left the studio soon after the strike ended. Apparently Kelly was disgusted by how many coworkers crossed the line. The friendship with Kimball was severed, and for his part Kimball kept future studio friendships on a more superficial level.

Hi Ali--Yes! You have a brilliant(as my uk pals would say)memory! Art had two photographs he'd saved of himself and Fred; the one I published back in January was the other one, and the one you remember from the Babbitt documentary was taken at the same time(about 1932); it was such a cool picture. For some reason, Art let me borrow the one photo(of the three guys at their desks--Moore, Babbitt and Larry Clemmons), but not both. It looked just as you descibe. : )

Kevin--it likely doesn't fit; the title card treatment was after all probably planned long before labor troubles were a real problem(the strike had just started when Dragon came out, and was settled a short time later). I do think it was absolutely a "thanks, guys" gesture to feature them, along with their own sigs and caricatures--and of course mainly it's the fact that it is after all a "behind the scenes" film. It's similar to "Nothing Sacred"'s titles(1937 William Wellman-directed Lombard film, which also had fantastic caricatures of almost every person listed in the title cards(pretty neat--and in color, too).

While I didn't know what Kelly did re: the strike, I do have Art Babbitt on tape telling me something almost exactly the same that really suprised me, when I did my long interview with him in '81. He said that on the first morning of the strike, both Ward and Fred stood outside together for a few moments and didn't go into work, watching the strikers and unsure of what to do. He continues: "Now, Ward had come from a liberal family, and he knew what the score was, but Ward was looking out for Ward, as he always has[this said, believe it or not, pretty gently and affectionately]. But Freddy...Freddy I think was torn; here was Disney, who had given him this great job, great salary...and yet all his friends were out there[on the picket line]". He said this totally without rancor towards either Kimball or Moore, which--if you've heard all those stories about Art's feelings on the entire strike matter, and which I saw in full force where others were concerned--shows how much he thought of both of them, I think. I also was flabbergasted that two men--both huge stars, of course, at Disney's, with so much to lose(in Walt's esteem)--were as conflicted as that. He made no mention of Kelly, and I was given to understand from Ward that Kelly was drafted, and then wanted to do his own thing anyway, so he quit Disney's rather than return to a huge studio setup. Ward seemd a little wistful about that...I don't know how much their relationship suffered postwar or why or if, but he certainly showed me letters back & forth between them during the 60s that implied there'd been at least a constant mail relationship. But of course, Art may simply not have mentioned the presence of Walt Kelly on the sidewalk...interesting.

Boy, Floyd--what an opportunity. I'd have killed to have sat through it with Joe Grant! You lucky dog!
Yes, isn't it incredible how they both look here? Ward is only 27-28 years old! Good God! Although I'd like to know who he paid to cut his hair(if he did pay anyone). : )

The dyed blond Alan Ladd impersonating a staff Disney storyman in "Reluctant Dragon" comes off as a bizarre choice, given his later stardom. Perhaps RKO wanted a "real" actor for that dialogue-heavy part. My favorite line from the picture is still Benchley's "...no matter how hard I try, I keep hitting the same duck!"

I'm so glad to have found a place that can give me more info on Fred Moore than the animation history books can! (I know, I know, a little late in the game for me to come upon this site!)
As for The Reluctant Dragon, do you know if the full length movie exists in any other home video form other than DVD? I do notice the edit jump that you mention, and noticed a photograph in the "Nine Old Men" book of Fred showing Benchley the movieola like in the storyboard, and he has a cigarette in his hand. Perhaps that scene was cut in the DVD release due to Disney's firm "No Smoking policy" in its films in recent years. Just a thought, as the DVD is the only version of the film I have seen.