I was digging through some boxes in our basement looking for some old art books when I came across these--just in time for tonight--an unused pair of tickets to the ceremony: 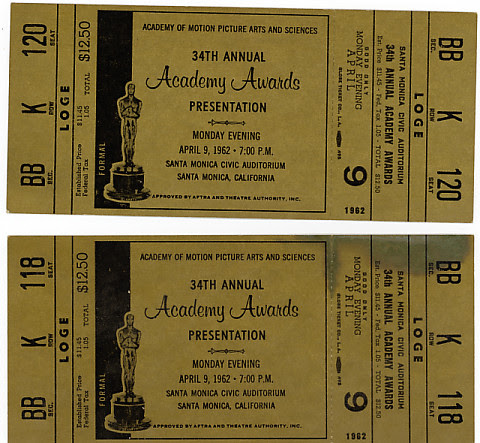 I love the fact that they're a real, iridescent "gold", too.

For a rundown of who was nominated and won that night 44 years ago, see here. Incidentally, they have the date wrong on that page, as you'll see from studying the tickets--the actual event was on the 9th, a Monday, not a Sunday(as it always was until a couple of years ago).
And they cost a whopping $12.50 in 1962--including the "Fed. Tax". I think it's at least $350 per person now, isn't it? And that's for the nosebleed seats.

The Academy Award nominees for "cartoon" short subject in 1962 were:

The Hole (Storyboard, Inc.; Brandon Films)
Icarus Montgolfier Wright (Format Films; United Artists)
Now Hear This (Looney Tune Series) (Warner Bros. Cartoons, Inc.; Warner Bros.)
Self-Defense—For Cowards (Self-Help Series) (Rembrandt Films; Film Representations)
Symposium on Popular Songs (Walt Disney Productions; Buena Vista)
"The Hole" won. It's the only one of the nominees I've seen, as far as I know. And it's by the wonderful team of John and Faith Hubley. A very topical and timely piece in '61.
several hours later: A big Congratulations to Nick Park, Steve Box and John Canemaker. These animators worked on, and won Oscars for--extremely personal films, a great achievement that hardly ever happens for any filmmakers. Cheers, guys. And congratulations to all the nominees.

"A Symposium of Popular Songs" is on the new "Disney Rarities" collection DVD. A really great set for those of you who don't already have it!

And very entertaining it is, too, showcasing the talents of the Sherman brothers and the singing vocals of the late Paul Frees, a friend of Elvis.

Nice tickets! It's nice that those chaps won for Wallace and Grommit after their studios burned down. At least some artists might enjoy some double duty recreating everything.

You might enjoy my blog yesterday on Oscar night ART quotes:
http://whatacharacter.wordpress.com/

How much would that ticket be worth if it went to auction? Wow! Imagine?

How much would that ticket be worth if it went to auction? Imagine?