Ricky, Pete, George Booth and UP 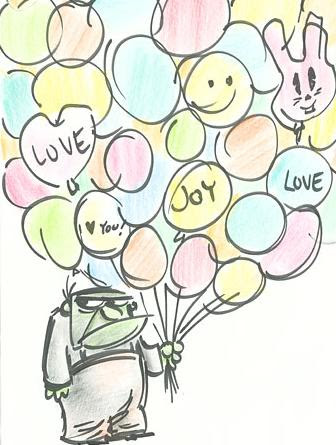 sketch of Carl by Pete Docter

Yesterday's New York Times had an interesting article about the character designs in "UP".

Accompanying the text of the original published piece is yet another of those online-only great Times interactive specialties, with Ricky(Nierva) and Pete (Docter) discussing their ideas. Wonderful stuff.

And if you're not familiar with George Booth yet, you should be.

ADDENDUM: Some of you probably know that "UP" had its premiere at Cannes last week. I know virtually nothing about the film. First, because in its early days as with all the projects of that studio no one working on it or around it said anything, and so pretty much everyone not in Emeryville was in the dark.

When we down south do get jots of information--that Brad Bird has taken over direction of "Ratatouille", for instance--all we know is it's something concerning a rat/chef. Dubious as it might seem as a premise, it's usually a safe bet to assume that Bird will pull off whatever he's doing.

The same goes for the people working on "UP". While I've certainly been curious about it, as its release nears I find I don't want any spoilers at all. I really want to be surprised.

So, the film finally opened at Cannes--the first film screened (out of competition), a gala event. It was reported that it received an ovation. Todd McCarthy, longtime primary reviewer for variety and one of my favorite writers on fllm, filed his report. I skimmed the traditional bold-type opening paragraph, reading no further than that as I didn't want to learn anything crucial. Here's a bit of what he wrote:

Tale of an unlikely journey to uncharted geographic and emotional territory by an old codger and a young explorer could easily have been cloying, but instead proves disarming in its deep reserves of narrative imagination and surprise, as well as its poignant thematic balance of dreams deferred and dreams fulfilled.

Mr. McCarthy doesn't toss around that kind of sentiment very lightly.
It sounds lovely, and I wish the crew all the happiness that a good film will bring, that they've earned through their hard work these last 3-plus years.

Thanks for the link; Great to get a little non-spoilery look at the design process.

I've seen the film. It is amazing. Pete Docter, Bob Peterson, and Ricky Nierva, along with the entire crew, have made what I think many will consider the best film ever out of Pixar, and one of the very best films in a long time.

When Walt died after the completion of "The Jungle Book," I really thought that the creative days of animation were over.

Who knew that the creative spirit of Walt would be transplanted in a obscure Northern California studio?

No one could have been more shocked than myself when I moved north in 1997 and saw it first hand.

I am looking forward to it. The industry does have a habit of leaving crumbs, of which there have been very few for this film.

I shall wait for the release and God willing enjoy it with my fellow plebians.

Wonderful blog (both of them)! Thank you, from a new subscriber.

I loved "Up". While it's not my favourite or second favourite Pixar film, that's no slight, because to me the only thing that can beat a Pixar film is another Pixar film.