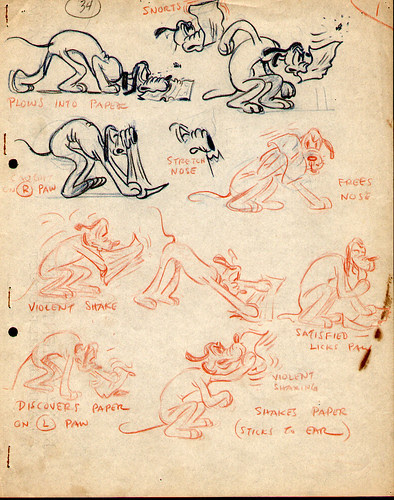 One way to tell is to check the handwriting styles of this series and with known handwriting of Fergie. I say this only because that's how I usually have to find out about various illustrators who do not get credit in their work sometimes.

To me, it does look like animator studies for that particular sequence (I do this all the time), although the one telling item for me is when on Page 2 where it says "Might roll completely over" -- a person studying this sequence wouldn't say "might" since it has already been done. This could be Fergie's sketches/studies then. However, how different are the poses and silhouettes? I would think that if these were drawn by someone actually looking at the film then the drawings would be almost identical to what was already done on film. Fergie's drawings could be slightly off since he would be trying to get the poses down right. Maybe?

Jenny, sorry to be off-topic but what about your trip to Paris? Aren't you going to write anything about that? I'm dying to hear about what you saw there!

Hmmm...Ward(I get sucha kick out of writing that name, btw--if I had a boy that'd be a top contender), I think you're probably right. I'd better stay current on Mike Barrier's blog to see how people weigh in. You should email him your thoughts.

Eddie: off topic?! How could you?
Oh-of course that's okay! I definitely have Paris thoughts bursting through my breast and brain, but as I didn't get to Gobelins as planned(the marvelous animation school there), I am a little leery of such a digression--purely travel-culture-oriented thoughts on what I try to keep an animation blog--Charles Nelson Reilly eulogies notwithstanding. ; )
But I so want to write about it that I will post something on my Sketchbook blog anon. We're just kind of swamped here lately...Paris deserves the best composition I can manage! Thanks for asking, though--I'm tickled you still want to know.

"...although the one telling item for me is when on Page 2 where it says "Might roll completely over" -- a person studying this sequence wouldn't say "might" since it has already been done. "

Although in the days before the vcr, the person could be drawing this sequence from memory.

They might be trying to draw out the whole sequence after being in the screening room... They could be unclear over whether Pluto rolls completely over at that point or not.

Oh my god those are fantastic!