Monday drawing: a Disney rough from the distant past 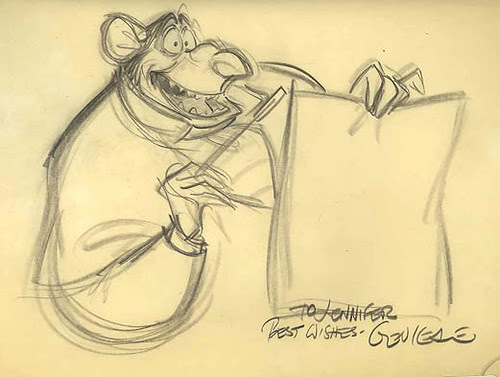 I've gone back and forth over whether to post this, but for a lack of uninscribed items to hand, here it is.
Pretty neat.
I think It deserves to be seen and shared as it's a great drawing from a legendary animator, a key of one of his best-ever performances--the villain Ratigan in "The Great Mouse Detective". The slightly embarrassing part is the inscription--embarrassing, because I didn't then and don't now know Glen Keane personally. This was given to me by an old friend, at that time a newly-minted assistant on "Great Mouse" who offered to acquire this for me and have Glen sign it. Who in their right mind would refuse such an offer? Not me.
This was circa 1985--I was two years away from entering CalArts' character animation program, working in a cinema bookshop, taking the animation union's life drawing night class from Glen Vilppu, putting together a portfolio.

But back to the drawing: it looks better in person--but what a solid, elegant, expressive piece of work it is. Great shapes. I just noticed to my surprise that Ratigan has four fingers on his hands, rather than the usual cartoon three; I suppose Basil, Dawson and the other characters did as well...anyone know? It's marked for an "INHale" from Ratigan at the top, drawn on 12 field paper no doubt with a Blaisdell, lightly creased from rolling at the left side as almost all such roughs are. I've always wanted to see a film where the rough tests are the end-result for the look of the film, where some effort is made to really preserve the immediacy and energy of lines like these. Watching such tests--usually all too short in length on DVD extras--is a visceral pleasure for the eyes.

It's been a nice long weekend. Now we're faced with a short week and two weeks' worth to do in it. It was ever thus!

Great drawing thanks for posting it.

I definetly agree about the rough tests - I had the chance to see the opening of Basil of Baker Street which was comprised mostly of pencil tests and storyboards - it really made me want to go back and see the movie again, to be sure!

I also had a friend who recently showed me a Glen Keane drawing of his own! You gotta love seeing a good Keane rough!

Great drawing, thanks for posting..
Can you tell more about blaisdell??
It seems that you have have a lot of knowledge about good drawing tools..

Well, with all the newer ways of distributing film and video now, I'd hope that some company would have the wherewithall to make a rough animation cut of a film available someday.

In the meantime, this'll do nicely. Thanks for keeping on, keeping on! Good luck with the crunch.

What a beautiful drawing, Jenny.
Thanks for sharing it.
it must have been an incredibly inspiring gift to receive, right before going into CalArts too.
I wouldn't be able to refuse that offer either.

ROUGH ANIMATION! that's what it's all about! I too wish they released movies in their rough stage. That's where the beauty of the drawing is.. That's where you see the drawings come to life!
All disney movies lost life after all the cleanup and color added to them.. I love the old photocopy frames of Sword in the Stone.. so beautiful...