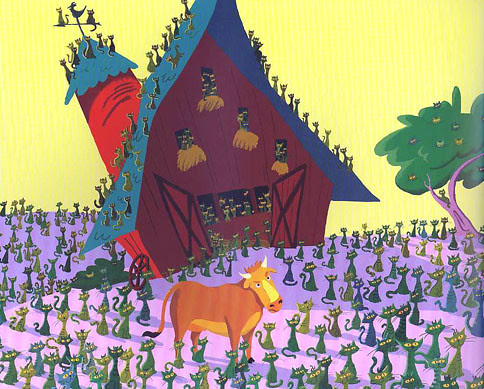 One of the best raconteurs I know of in animation is Scott Santoro. He makes the dry wit of David Sedaris look like Milton Berle(no offense to Berle fans)...when Scott talks about a grade-school field trip, arriving home with what he thought was a swell gift for his mom, it's an anecdote that produces screaming fits...what he really should have is his own podcast, but what he likes to do best when not storyboarding is writing and illustrating picture books. His latest is Farm-Fresh Cats, just out from HarperCollins children's books. 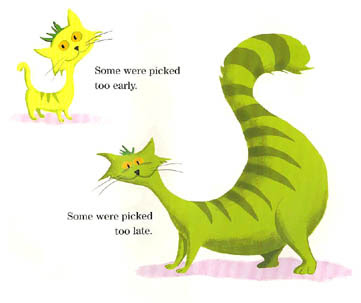 one of my favorite pages

Scott's a veteran of a time when working in the animation business in any capacity was an achievement: the very early 1980s. He started in effects animation, working at Disney on "Something Wicked This Way Comes" and later joined Don Bluth on his initial, best feature, "The Secret Of NIMH". He went back to Disney's for "Lion King" and "Aladdin", and then, after stints at several other studios(including Amblimation, where we met doing story development on an aborted "Cats" adaptation)he settled at Dreamworks, where he moved permanently into story about 3 years ago. His sense of humor always brings the unexpected to the films he works on...he's truly one of a kind.

Scott in earlier days, amassing a killer car collection and entertaining the neighborhood

His books--this is his third title in print in the last several years--are reflections of his own childhood interests and memories. "Farm-Fresh Cats" has been kid-approved by the son of my head of story, who asks to be read from it night after night...anyone with kids who love cats or any animals and have a love of delightful weirdness will enjoy these mysterious kittens. Check it out.