At the end of the work week yesterday a good friend dropped into my office and pointed at this image, framed on the wall: 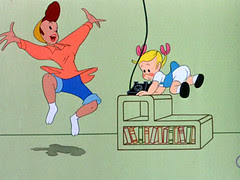 ...which I've posted before here.
He's now primarily a designer in visual development on our films, but he spent a good deal of his career as an animator. Spontaneously, he launched into how he felt when, as a kid and before he'd had any notion of animating for a living, he first saw "All The Cats Join In", the Benny Goodman segment of "Make Mine Music" this image is from.
"this--when I saw this...it was--pure happiness!" he said, making an expansive and quintessentially gallic gesture with his hands. He went on to describe the effect of the marriage of movement to music; the girl getting dressed, the kids dancing--and I was kicking myself that I'm no stenographer, as how he expressed the allure of Fred Moore's designs and animation was about the most eloquent way I've heard it put, and I wanted to post it here for you. My memory can't do justice to his words, unfortunately. I know he talked of having a book--which title he couldn't recall--open on his desk with a page of Fred Moore drawings, and how he'd be inspired by the rhythm and fluidity of them. "Pure happiness!" he said again, and I wasn't quite sure if he meant his feelings or the animation itself--I guessed it was both.

I've only been able to post the static drawings of Fred Moore here, and his style was such that they stand on their own. But his name was made as an animator, not a graphic artist, and rightly so. His innovative redesign of everything the Disney studio built upon for their characters and for the way those characters moved and by moving, acted, can't be emphasized strongly enough. He really did remake the studio's style in his own, highly distinctive, personal image.

There's no question that there were other artists whose influences were strongly felt (if not credited) in the heady time of the 1930s, but this mainly self-taught artist gave most of his colleagues a whole new way of looking at forms on paper and making them appealing and alive.

Even though it's been cited so often it must have some basis in fact, I think the whole idea that "Fred was a total 'natural'--he didn't think about it, it just came out of him" is somewhat overblown. As Michael Barrier points out in his book Hollywood Cartoons, Fred worked for years after being hired at Disney before he was even promoted to animator; so much for the "boy wonder". James Walker spoke to a colleague of Fred's who described him as having a terrible struggle with drawing the Ub Iwerks Mickey Mouse, with his hard-edged, somewhat stiff and unforgiving design. This colleague suggested Fred try goofing around with how he would draw Mickey if it were up to him to design him, and he did--just as a personal exercise, initially. His sketches were noticed and encouraged, and he suddenly blossomed. The story seems as if it might have a lot of truth in it, given the operating style of the Hyperion studio and the fact that until '32 Fred was given little of consequence to do.

He wasn't a childish man, if he was a puckish one, and if he was no intellectual, he was far from naive or dumb. Much is made of his inarticulateness, yet he gave a pretty detailed and extremely perceptive lecture to the staff on the subject of animating Mickey Mouse, which he presumably wrote himself. The old quote: "Don Graham can give you the rule; I just say it looks better" could be repeated by most of my talented coworkers today--all artists are more often than not famously unable to describe exactly how they achieve a certain effect or style. Especially when, as with Moore's work, there's no calculated, forced feeling. Yet animation is famously tedious to do, and this man, along with his more schooled, sophisticated colleagues, hammered out his scenes just as they did--not blindfolded, but with planning and the aim of a performance.
I hope everyone's enjoyed looking over this guy's shoulder as much as I have these last couple of weeks. There's more, but I'll give everyone a breather while I reorganize the material I have and that our patron here, James Walker, would like to share with us. It's been a terrific privilege.
Pure happiness! 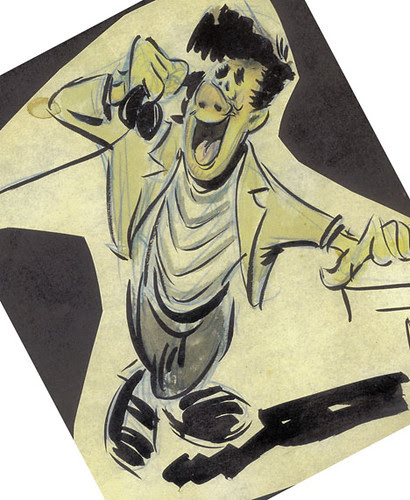 Back in animation school, I heard that Freddy Moore applied at Disney with a portfolio consisting of doodles he did on a paper bag. Is this true?

Excellent scource of material regarding aniamtion and it state what u said below about the cartoon today is so true every looks so similar and there is so much talent being wasted on the same old thing, I long for those days when the artist were pushed to be fresh and innovative with there art seems that north america is fallin into a bit of rut or maybe just to comfortable to want to try something new and fresh and let the people decide for them selves want they want to see not have it spoon fed to us like babies. Well I'll be sure to return for more info take care!!!
www.henchpekaso.blogspot.com Linton Joseph

Do your "have" any rough sketches by Moore of Woody Woodpecker.I like the design from him used in the "Mad Hater".

Hans, I have nothing done by Moore for Walter Lantz, and James Walker(ALL of the artwork I've posted these last two weeks, unless I mention otherwise, is from his collection)doesn't either; apparently Lantz(or rather, Universal) saved nothingin any sort of archive. There must be some odd sketches out there somewhere saved by someone, but they havne't come to light yet as far as I am aware. I'd love to see some too!

David, the most common version of what Fred applied with that I have heard is that he'd drawn on those shirt cardboards that laundries packed shirts with(I actually used to love drawing on these too, when I was 7-12 years old); this could well be true--they wouldn't have made a half-bad support for drawings. But I think the "brown paper bag" stories are an exaggeration which further emphasizes that Fred was a dirt-poor hick, which wasn't true. He'd taken classes at Chouinard, for pity's sake. He knew better than to have to draw on torn up bags, or apply to a studio like Disney(already a fairly legendary place in L.A.)with "doodles". I'm pretty sure he had some beautiful life and gesture drawings, with movement, guys playing baseball(that I've heard and can believe), etc.

I just loved the Joe Carioca with the girls sketches!!!Moore is able to be sexy and funny at the same time.

I really wish Disney would make a good, uncensored, DVD of Make Mine Music. I've only ever seen segments of All The Cats Join In on my copy of the Fantasia/Fantasia 2000 DVD and I absolutely love to own it in its entirity.

I just can't bring myself to buy yet another DVD that I know I'm going to replace in a couple of years when Disney come round their senses and release it properly.